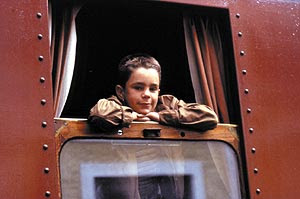 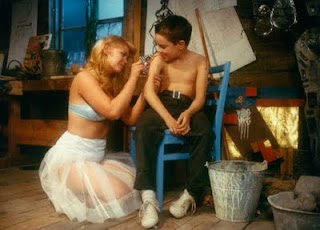 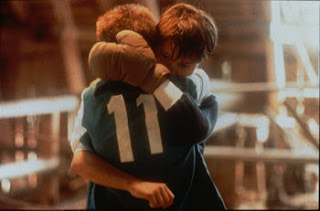 Lasse Hallström, Reidar Jönsson [based on his novel], Brasse Brännström, and Per Berglund (screenplay), Lasse Hallström (director) Mitt Liv Som Hund (My Life as a Dog) / 1985

Effects of Art (on Jean Fremon's The Real Life of Shadows) 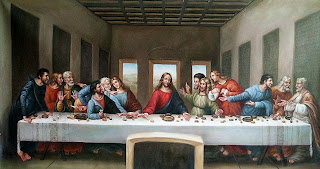 She tears up the letter. She writes Not guilty. Pasting the letter back together with scotch tape, she writes, "10) Not guilty Not guilty Not guilty," putting the letter back in the drawer and locking it away.
The very image of such fragmented and broken objects has, like all of art, revealed to her, temporarily perhaps, something of her own life, her fears and feelings of failure. Images, accordingly, are powerful things, dangerous in themselves, in their effects upon our lives despite their lack of reality. What we see, Frémon suggests, must also sometimes be mitigated, forgotten, locked away from our sight.
Time and again in these subtle stories, Frémon reveals to us how the shadow, the image of experience, is quickly transformed into reality.

The Crazy House (on Rossini's The Barber of Seville) 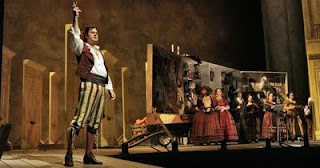 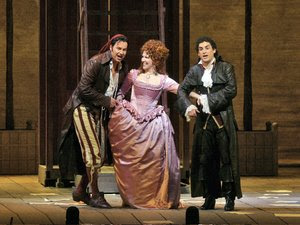 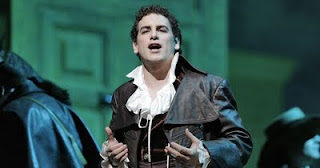 Cesare Sterbini, based on the play by Pierre Beaumarchais (librettist), Gioacchino Rossini (composer) Il barbiere di siviglia, ossia L'inutile precauzione (The Barber of Seville, or The Useless Precaution) / High Definition broadcast of March 24th, 2007 production at the Metropolitan Opera / the production Howard and I saw was at Century City in Los Angeles
The story of The Barber of Seville, as most opera-goers know, is a simple one, the kind of contrived plot behind hundreds of 17th and 18th century farces. Count Almaviva, having espied Rosina in the streets, has fallen in love and followed her to Seville, where he disguises himself as a poor student, Lindoro. Rosina is equally in love with the young man, but is locked away in the house of her guardian, Dr. Bartolo, advised by the musician Basilio, who warns him of the Count's love for Bartolo's ward. Hearing of the Count's interest and the arrival in Seville of a young man, Bartolo tightens the young girl's security, since he himself intends to marry her.
Figaro, the local barber who has entry to all homes and—so it appears—hearts, is an old friend of the Count, and plots with him how he might enter Bartolo's house. He will disguise himself yet again, this time as a drunken soldier, ordered to be billeted in Bartolo's home. When that ends in chaos and failure, the Count visits the house as a disciple of Don Basilio to teach Rosina a music lesson, plotting with her their escape that night.
The rest of the story predictably involves around a number of temporary setbacks and detours, but ends in the joyful marriage of Rosina to the Count with a nod to Figaro's necessary help, although by opera's end it does almost seem that if the Count had simply appeared as himself in the beginning he might more easily have won Rosina's hand, as if, as the subtitle suggests, all his precautions were useless. But then, of course, there would have been no occasion around which to weave Rossini's joyous arias!
Aspects of this plot have been employed in so many instances that it may sound to the reader than I am describing another opera or play. Certainly the flaxen-haired ward of Judge Turpin in Sweeney Todd, Lucy, a young girl also held against her will, whom the lecherous Judge intends to marry, quickly springs to mind.
What makes Rossini's version refreshing, however, is the heady willfulness of his heroine, who from the first scene is determined to get the man she wants and is so artful in her quick-witted lies that the audience gasps as she nearly outfoxes her suspicious guardian. In Act II, when Bartolo suggests the letter of love he possesses was sent by the count to another woman, so strong is Rosina's sense of vengeance that she is willing to destroy her own life by marrying the old coot. In short, we can only feel a comic delight when the Count sings of the pains and sorrows the poor, innocent girl has had to suffer; for the woman with whom he will awake in the morning is, in fact, another being than the one of which he sings. There is, indeed, a kind of madness in his love.
Not only is Rossini's opera, at times, a madcap farce, but is a work that speaks again and again of madness. It is, first of all, a world dominated by the busy activities of Figaro, involved as he is in the secrets and scandals of city life. Despite the seemingly sequestered world of Dr. Bartolo's house wherein Rosina is confined, moreover, people rush in and out on a regular basis, particularly the Count, first as a soldier, then as a musician; but so too does Figaro feel, evidently, at home in the place, so much so that he is even able to obtain Bartolo's keys. At one point, when Basilio is locked out of the house, he simply pulls apart the iron gate that protects the place. These comings and goings provoke such an uproar at the end of Act I that a crowd gathers in the streets outside the home and the civil guard arrives to correct the chaos. The maid, Berta, sings of the crazy household ("Il vecchitto cerca moglie."). Madness reigns throughout this opera, a storm accompanying even the would-be saviors of Rosina. Is it any wonder that when order is restored, Bartolo defeated, and the Count married to his love, we who have witnessed all these events can only suspect that Rosina and Almaviva may soon continue that chaos in their own new abode.
Posted by greenintegerblog at 10:32 AM No comments: