Two Tales from 12 Last Days of the Soviet Union: Gogol's Coat and Waiting for Tea 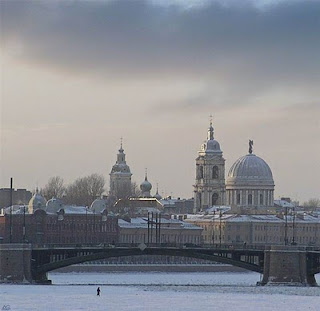 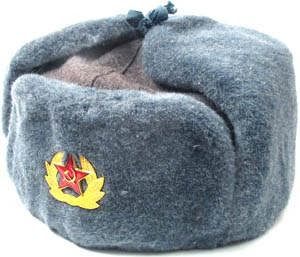 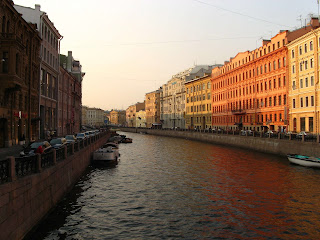 Day One - Gogol's Coat
After my father's death in 2003, my mother gave me his dress coat, a long brown winter garment that I have never worn but once—on a trip to New York in the middle of winter. It is quite out of character with my usual costume, considering my lack of fashionable dress, like something from another time and place.
A few years before Howard had bought a blue-hooded cotton and nylon coat in Japan that I also sometimes use on my trips to Manhattan. Just as often, however, I travel with only a suit coat. I am known throughout New York as "the man without a coat!"

In 1989, however, I did not even own anything but a spring jacket. And I as I prepared for a trip with Lyn Hejinian, her husband, saxophonist Larry Ochs, and the ROVA Quartet, I bemoaned the fact that I hadn't one. "I suppose I shall have to go out and purchase an overcoat," I mentioned to Lyn in a telephone conversation. "You most certainly will," she responded. "Leningrad is brutal in November! But my son has a coat. Why don't I bring you that?" "Wonderful," I responded. "That would solve the problem!"
Since I was in New York City just prior to the trip, I left with others joining us from that region on Finnair from Newark. On the same plane were poet Clark Coolidge and his wife, Susan, who in those days lived in upstate New York.
Unlike most American flights and other European airlines I'd been on, the many Finnish passengers, almost all tall, imposing men, walked up and down the aisles throughout the flight, using the back galley as a kind of bar. They drank all night. There was no possible way to sleep.
We were to meet the San Francisco contingent of our group—consisting of most of some twenty group travelers—in Helsinki. But we found no one to meet us at the airport, and soon thereafter, we discovered that the San Francisco plane had been delayed by an entire day or two! None of the few of us in Helsinki had ever been to the Soviet Union, and the tour guide, who might have led us through the difficulties of entering through Leningrad, was with the San Francisco contingent. We had no other choice but to proceed on our own.
Fortunately, poet and friend Arkadii Dragomoschenko had been forewarned of our plight, and was at the Leningrad airport to meet us and help us through customs. He arranged for a bus to the hotel, where we were met also by ROVA photographer, Peter Vilms, who was to me my roommate, who had arrived earlier from Helsinki, traveling through his ancestral Estonia before arriving in Russia. The official Soviet tour guides were also there, and as soon as we had unpacked and showered, they took us out for a short tour. Suddenly, standing on a snowbank in the freezing winter, I remembered that I was without a coat; Lyn had what was to brought "my" coat with her!
The guides helped me to buy a Ushanka, the famed Russian hat, and one of them loaned me a scarf. I put on the heaviest sweater I had brought. But it was several degrees below zero Fahrenheit, and, despite my cheery bluff, I was absolutely freezing. Perhaps we were saved from more enforced tours that first afternoon simply because of my incessant chatter of teeth. Besides, we needed the sleep.
I felt kinship with Gogol's poor character, Akakii Akakievich, a man whose coat has been stolen! But then, I had never had one to begin! I was even more of a fool than Akakii.
It took almost two days for the others to arrive, and the tour guides refused to let us remain inside. Yet I survived. Finally the coat, along with the rest of the group, appeared, and I was able to move through the city without fear of freezing. Indeed, somehow, I, who hate shopping and resist that activity at home, got the moniker, there in Russia, as "the shopper," since I visited dozens of out of the way Soviet shops.
What fascinated me about them was that in most of them there was simply nothing to buy, or they contained ridiculous items that had little at all to do with how they had advertised themselves. For example, what had been a jewelry store was suddenly filled with gym mats. The jewels, watches, and other things had never arrived or perhaps no longer existed, but they had been shipped, perhaps by accident or by request, boxes and boxes of gym mats; and that, accordingly was what they were now selling. How many customers they had for such a ridiculous object, priced out of range for most Russian citizens, I have no clue. But everyone from the neighborhood had seemingly come out to see them—as if perhaps the arrival of these bright green and blue mats were an indicator of better times to come; maybe the authorities might even ship them food! For weeks, so Arkaddi told us, Leningrad had survived mostly on spaghetti.
So I walked and walked, one day even becoming lost, as I explain below in "Waiting for Tea." Now I was quite comfortable going about. Strangely, by the time our trip ended two weeks later, one by one everyone had come down with a cold—except me. I didn't even sniffle.

Our tour group met together each day in the hotel dining room at a precisely appointed time for lunch and dinner. Food was not served outside of these set parameters, and if you were not punctual you simply missed out. Usually the meal consisted of some mix of salmon and herring along with a small serving of vodka, followed by a kind meat patty and potatoes. Most of us chose to drink lukewarm Pepsi, since the bottled water was unbearably salty and the regular waters of Leningrad were so polluted that people not immune to the drinking often developed stomach ailments including serious bacterial infections. We were warned never to drink water! The meal was followed always by ice cream.
After several days of being hurried from site to site by our in-tourist guides, I decided to elude them one morning, setting out on a journey of Leningrad by myself. I brought along a piece of paper naming my hotel and bravely set forth, walking first toward the center of the city, following the famed Neva River, turning and wandering down the vast Nevsky Prospekt. As the Russian author Andrei Biely described it:

Some of the grand buildings were still beautiful, but many had an almost fairy-tale like quality, the outsides appearing like stage-sets with nothing behind them. And indeed when I went into some of the grandest of these stores, there was nothing within. What had once been great groceries and clothing emporiums were now almost empty sets.
Still the Russians crowded through the doorways as if there might be possibly a new delivery of what they had lost. Throughout the city, and I would later confirm this, all double doors were arranged according to determined blockage to entry and exit. Wherever there we two doors, one was locked, so that people coming and people going were forced to wait for one another, as if the authorities were determined to hold those who were about to enter as long as possible from entering, while also stopping up the flow of those about to leave. At many doors, moreover, sat a man or woman on a stool as if they might check the passing crowd's papers. Yet they did nothing more than further block that furtive coming and going of the public mass.
At one point I stopped and ordered a small cup of what I was told was called "soku," a combination of crushed ice and fruit juice. I quickly drank it down, suddenly realizing I had just swallowed the polluted waters of the Neva. Would I survive?
A few yards further, I saw a long line snaking up to a little hut. The people in line, I soon realized, were waiting for tea. This impossibly long wait so intrigued me I decided I would join the line, just to experience the kinds of wait the Russians daily had to endure for anything they might seek. An hour later, I had a cup of tea in my hands for which was I was not even thirsty. I don't even like tea, but I drank it all up, embarrassed for having made everyone behind me wait. But through that event I realized how everyday mothers and fathers, sons and daughters had to be determined to survive. If you wanted to put food on the family table, the mother had to wait in line for hours; it you wanted to drink of cup of tea between work shifts, it was necessary to patiently endure the cold. It was easier not to survive than to continue the travesty of ordinary life. There was no ordinary life in Russia any more.
Indeed, the whole city, despite its occasional spectacular beauty, seemed destitute. And Moscow would later seem even more so. All those years the United States leader's arguments for a verbal, financial, and militaristic war with this nation had been built, to my way of thinking, on a horrible lie. The Soviet Union appeared to me as a 19th century country in a 20th century cultural predicament. Yes, they had missiles, bombs of destruction, but what had it all been about? We had won the battle while losing our souls.
I walked on and on, visiting all sorts of stores, little shops, black-market kiosks (as warned, I bought nothing at these), tiny huts, even underground bathrooms, trying to find something that I might find familiar. Everything seemed foreign and cold. I realized that I could not survive in Leningrad—at least not in 1989—that, if I lived in this city, the man I was could not have been me.
Soon I realized I had walked far from the center, and I no longer knew where I going. The light was beginning to fade, and I grew weary. How to return to the hotel? I tried to stop a person, showing them the name in Cyrillic on my piece of paper. But they could not or would tell me anything. Hotels were off limits to the regular citizens, and perhaps they didn't even know what it was I was trying to ask? I became frightened. Would I be forced to spend the night on the freezing streets of Leningrad, without food and a place to sleep?
At a small kiosk, I pointed to a map, which I purchased, trying desperately to match the street sign beside me to a name of the map. Finally, I spotted a word that might be the same. I turned and walked in the direction of what appeared to be the Neva, after a long while, reaching Nevsky Prospekt, feeling my way back to the hotel. I was hungry, but I had missed the appointed hour. Now I knew how if felt if one decided not to wait, not to suffer the daily indignities of the system. If I had had children, they would have gone hungry as well.

Does Peter Vilms that you roomed with, live in the U.S.? any contact info on him. We have known each other since 1999 and have lost touch since 2006.
Thanks,
bijan@1stnationalprocessing.us