Present Only: An Interview with Marjorie Perloff 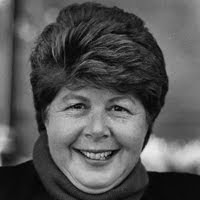 Present Only
by Douglas Messerli
Marjorie, we've known each other for about 35 years, and over that time I've read almost every book you've written. It appears to me, in retrospect, that you have almost had a kind of platonic love affair with every author about whom you've written. Do you have a favorite "lover"?

MARJORIE: These are questions Gertrude Stein would want us to ask. (TPOI, 76)

I mean, you seem almost swept up by literature, swept away as it were.

MARJORIE: The line between sense and nonsense is, of course, a narrow one. (TPOI, 77)

I recall the period in which you seemed almost to devour Wittgenstein.

MARJORIE: Time stood still: I had no thought for the next day or week, or year, I don't recall wondering what New York and our new house would be like, where I would go to school, and so on. (TVP, 66-67)

You began with figures you yourself might now describe as rather traditional, Sylvia Plath, Robert Lowell. When I met you, you had just completed a biography of Frank O'Hara, a definite shift in poetic form and subject. Can you describe what happened to you that led to that shift?

MARJORIE: To call the bats "disgusting" is to neutralize their force; anyone, after all, can deal with a set of "disgusting old rags." It is at this point that the poet can stand up and announce, both to the friend(s) with him on his Tuscan terrace, as well as to the reader, "In China the bat is a symbol of happiness." (PL, 113)

And then, almost in the next breath, you shifted again, incorporating European poets—Rimbaud, Apollinaire, Beckett and others as well as Americans such as Stein, Williams, Pound, Ashbery, Cage and Antin. I was in the course in which you were working on this book, The Poetics of Indeterminacy, a breathtaking experience!

MARJORIE: But isn't philosophy itself a specialized discourse with its own technical vocabulary? And, by analogy, isn't literary theory such a discourse? ...Philosophical analysis does not give us any new facts (says Wittgenstein). Accordingly, its language games cannot have a specific technical vocabulary and so the bifurcation between philosophy (or poetry) as "high" discourse, in which a certain vocabulary is de riguer, and ordinary language—language that even the most arcane philosopher engages in when he or she asks what time it is or when the next train is due to leave—breaks down. (WL, 72)

And yet, as breathtaking as that assimilation of 20th century poetics was, it wasn't separated, necessarily, from popular culture. I recall you writing on a soap opera, for instance, in The New Republic.

MARJORIE: I think this is a very important point. What Fredric Jameson refers to as the "warehouse of cultural cliché" is perhaps accurately viewed as "a giant laboratory of the poem," a laboratory in which art, in all its forms, worked to meet the challenge of the new science. This meant, of course, a radical questioning of existing modes of representation. (TFM, 75)

Precisely. Your work has been of one piece, whether you write on collage, advertising slogans, visual art, fiction (Joyce, Creeley, Elfride Jelinek, for example), history, philosophy, or poetry.

MARJORIE: The poets' repeated denial of "normal" word order or syntactic integrity, their introduction of arcane vocabulary and difficult, indeed confusing reference, functions, I think, to mime the coming to awareness of the mind in the face of the endless information glut that surrounds us. (RA, 173)

Well, but one could say, and I am not, only playing the Devil's advocate, your own prolificacy has contributed to that.

MARJORIE: To tell a story is to find a way—sometimes the only way—of knowing one's world. But since, in the view of many of our poets, as in the view of comparable fiction writers, the world doesn't—indeed shouldn't make sense, the gnosis which is narration remains fragmentary. (TDOTI, 161)

Are you suggesting that in all this vast array of writing you have been trying to tell the same story, how we mean, how we approach and use language to signify our lives?

MARJORIE: Comparison and contrast, in any case, can make a poetry class learn to differentiate between enigmas that cannot be resolved because the poet has no answers and those that are, more properly, surface difficulties, easily penetrable on a second or third reading. (D, 256)

Well that is, of course, what makes you such a brilliant teacher in the classroom. And then we do have this "prolificacy," this vast array of writers, artists, and thinkers about whom you've written to turn to, to compare and contrast. It is, in some respects, the very vastness of your life's project that has made it so essential to us.

MARJORIE: Then we went to the japanise pavilion, were you could see the silk spinning. There was a japanise lady to selling sings. ...Then we went to the city of light there is a round room and on one side on the wall is the hole city of New York in front the empirestate building then every thing is lighted and a man talks and then it gets night and everybody turns down the light and you can see the eleveters so nice through the windows. Then it gets much lighter and it is day and you can see the subways very good. (TVP, 124)

Yes, I can see your fascination with life, with how things look and mean, began even as a child.

MARJORIE: Your (Messerli's) syntax has no truck with what Yeats called "the natural words in the natural order"; on the contrary, it is the sound associations here that domesticate the "lust / er of facts" and determine the nature of the "lullaby." (TDOTI, 230)

True. And that does return us to the subject of your "lust(er) of life" and your deep love of a particular man.

MARJORIE: As always, my greatest debt is to Joseph K. Perloff. By no means a "common reader," he is nevertheless the other reader who forces me to take those important detours and sideroads that Wittgenstein talks about in the Philosophical Investigations. (PL, xii)

Tell me Marjorie, is there some great project you wish you might have accomplished or that you still intend to work on in the future?

MARJORIE: Suppose X and Y are out sailing and X says to Y, who is steering the boat, "Watch out! We're about to hit some rocks?" In that case, "Rocks are emitted by sentences to the eye," which immediately starts to scan the same grammatical construction. (WL, 215)

Are you suggesting that any project might naturally lead to another, and on and on. That, in a sense, your project, your vast affair with meaning, can never end?

MARJORIE: Perhaps the best way to think of a text like this one is to think of it as an X-ray. (TFM)

Thank you Marjorie. It's been illuminating.

All of Perloff's answers were randomly selected from eight of her books:

Los Angeles, February 21, 2010
This interview was performed at the event titled "Marjorie Perloff: Reconfiguring the Avant-Garde," on Thursday, February 25, 2010, at Chapman University, Orange, California.
Posted by greenintegerblog at 8:22 AM