"A Tenacity for Life" (on the death of Stanley Grinstein)

a tenacity for life

Stanley Grinstein, who died on March 2, at the age of 87, may have, as the Los Angeles Times described him, been “an unlikely arts patron”—particularly because his first business was a forklift company and, early on, he did not even collect art—but once he and his architect wife Elyse became engaged in the art world, it seemed as if he was born to play that role.

Just as importantly, Stanley involved local artists with those who were visitors from elsewhere, often encouraging collaborations not only between the visual artists, but between artists and musicians. The Grinsteins, who lived comfortably, but not grandly, often invited these artists and musicians into their homes, not only for parties but to stay in their house, sometimes for long periods of time. The Grinstein’s also began collecting art, and including those artists, as well, in their celebrations, often financially helping the younger artists when they needed it.

The period of many of these events in the late 1960s, 1970s, and early 1980s, was long before Howard and my arrival in Los Angeles, but the parties had become legendary for the creative energy and connections they provided—as well as for their open use of drugs and sex. In a sense the Grinsteins were like some wonderfully permissive uncle and aunt to figures in the art world, particularly at a time when Los Angeles had yet to be recognized as the center of art and music it later would become. If you wanted to be among composers and musicians, you visited the Betty Freeman’s house in Beverly Hills; if you wanted to hang out with artists (along with musicians and poets) you attended the parties at Grinstein’s Brentwood home.


Stanley, in particular, was a vivacious person, always ready to provide a kiss and a hug, seemingly joyful just to be in your presence. As I wrote in My Year 2004: Under Our Skin, the Grinsteins were the very first people to invite us to dinner when we arrived in Los Angeles in 1985, taking us to the famed Venice Beach Café, where we were seated next to actress Mary Kay Place, who, joining us at the Grinstein’s table, suddenly swept up the entire group in a ring of hands to pray! And in 2008, the year of Howard’s retirement from the museum, it was at their house where artists such as Eleanor Antin, Dan Wheeler, Bill Viola, Jim Morphesis, curators Stephanie Baron, Carol Elliol, and numerous others gathered to celebrate Howard tenure at the museum.


Both Stanley and Elyse had recently had operations, and despite opening their house up to such a large event, neither could move with ease. Stanley, who was suffering from kidney failure, was hooked up to a dialysis machine. Nevertheless, the two of them sat through the party with large smiles, clearly enchanted by having so many artists and friends about them. I think, even then that we all perceived that Stanley did not have too much more time to live. That he survived for more than five long years after that demonstrates his tenacity for life.

"An American Original" (on the death of Robert Ashley) 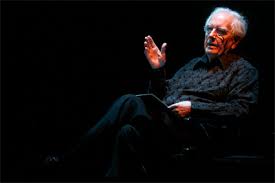 The 2014 My Year volume, subtitled “conversations with nature,” was originally perceived as a forum to focus on the issues of global warming and to more closely observe the natural world around me (including the nature of the human mind and heart). But it is gradually turning into a kind necrology—a momento mori, if nothing else, perhaps appropriate given what mankind is doing to the earth. Today I heard of the death of yet another acquaintance, the noted American composer Robert Ashley who passed away on March 3rd. The cause of death, at age 83, was cirrhosis of the liver

I did not know the man or his music well. I had listened to his “Automatic Writing” of 1979, in which he used a backdrop of electronic sounds upon which he projected his involuntary speech—somincomprehensible—caused by a mild form of Tourette’s Syndrome, from he suffered. And I listened to parts of his TV opera Perfect Lives (1977-80), where again he used a background of electronic drones, this time along with Indian tabia drums over which a voice recited a kind of Raymond Chandleresque story-like chatter.
I wish I’d been able to witness some of his several notable operas, which included In Memorium…Kit Carson (1963), The Morning Thing (1967), Atalanta (Acts of God) (1982-1991), the Now Eleanor’s Idea tetralogy of 1985-1994, Balseros (1997), Your Money My Life Goodbye (1998), Dust (1998), Celestial excursions (2003), and Concrete (2006). He had also just completed a piece titled Mixed Blessing, Indiana before his death. I do plan to visit several sites this week to hear more of his fascinating music.


With Gordon Mumma, Ashley also co-founded the Cooperative Studio for Electronic Music in 1958.


I met the man once, and we had a short conversation, when he won the John Cage Award for Music from the Foundation for Contemporary Performance Arts in 2002, the same year I won the Foundation’s award for poetry.

Posted by greenintegerblog at 7:33 AM No comments: