“My Crickets: A Little Decameron #26” 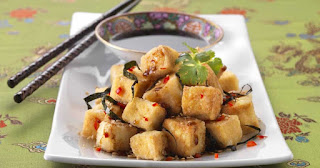 The mourning doves are very busy in their 5-note calls this morning. I got up a bit later than usual (4:00), and they began their calls at around 5:00. It's now about 6:00 and they are still busy. Today again there are several of them, some with higher and others with lower pitches.
At 7:30 they're still calling out to one another.
We also have little birds, which I call finches, who rush upwards with a small shrill sound of wing-beats or cries. Perhaps someone reading my narrative knows what kind of bird they really are. They too are gathering still in the dark, although in other years I've seen them only in daylight.
Toni Simon suggests they are simply house sparrows (scientifically described as finches).
Last night Howard made tofu and then drove down the street to our local Chinese restaurant for Chinese string beans.
So our crickets were served a plate of tiny bits of the string beans with water for their late dinner.
And yes, I did say "crickets" plural. Last night I suddenly realized that a single cricket could not be also making the slightly arrhythmic and chirruping sounds at the very same moment. And recently the noise has been so loud that it's hard to imagine one little cricket accomplishing such operatic performances.
The existence of the other male cricket still living with the first would also explain why a few weeks ago the cricket surveying my shower was black, and the other day the cricket I thought was dying was totally brown. So perhaps they are gay crickets, still inhabiting the same small hole of linoleum that has come loose. And, given the evidence, they represent a kind of bi-racial couple--or, at least, of different breeds.
Later, at 2:00 I listened carefully again, and at first simply heard one cricket at work; but soon after he was joined once more by a slightly different arrhythmic version of the first's leg thrashings.
I actually believe they did sip on some of the greens. And the tiny ramekin seemed to have shifted.

Posted by greenintegerblog at 12:41 PM