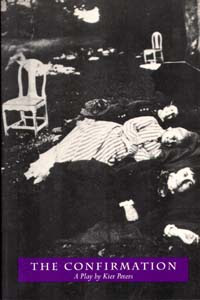 About twice a year, I check the computer to discover what my playwright pseudonym, Kier Peters, is up to. Over the years I’ve found he’s a fairly busy person, with plays being performed by experimental theatre companies and even at dinner theatres—all of which came as a surprise to me! But in 2007 I came across an even more interesting piece of information regarding his/my plays. The entry that popped up on Goggle sounded very promising, the first sentence reading: “The main topic of conversation, even after seven days, is still The Confirmation, the American play by Kier Peters we came to Bavaria to see.”

The blog of Frank W. Walsh went on to describe how he and his wife, after taking a long taxi ride, quickly found the train from Münich to Passau, arriving two hours later to be greeted by Josh and Jutta. Josh, a teacher at the University of Passau and the director of the English Drama Group, whisked the American couple away for lunch before taking them to Passau’s oldest movie theater, where The Confirmation was being performed. “The place reminds me of the theaters I went to throughout my childhood,” wrote Walsh. “Its concession stand serves popcorn, candy, beer if you like. You came through the doors under where the screen would have been, as in the Pheil Theater in St. Petersburg (Florida) many years ago when Central Avenue was hopping. Then you go up, past rows and rows of chairs to a wide aisle under the projection booth where you can see everything and still have plenty of room.”

“The lights darken,” he continues. “The play begins. But it doesn’t. A four-piece band plays Klezmer music. Foot tapping and stomping.”

“The curtain rises and an American family takes the stage. Then begins the peeling of the onion, layers of revelations. Much of it beyond me.”

Walsh goes on to discuss some of his favorite lines—one in particular uttered by the play’s shikker (Yiddish for a drunk) sister Blanche (speaking only Yiddish throughout the play, which the family believes to be Norwegian), who upon hearing one of her sister’s open a bottle of wine, shouts out: “Did I hear a cork?” With Josh and Jutta, evidently, this American couple “constructed tables with diagrams and arrows delineating relationships to better understand the play,” which had three sold-out performances! “Modern American theater is still alive,” declares Walsh, “—alive and well in Bavaria, Germany.”

The very idea of my crazy American family of women survivors—Grandma, Mother, Sister, Blanche and the family intruder, Sister’s lesbian lover Carmelita—being brought to life in that small Bavarian city nestled between three rivers (the Danube, the Inn, and Ilz) at the border of the Czech Republic, amazed me! As Paul Vangelisti merrily chuckled over the phone the other day—he being one of the few individuals who love such accidental collisions of discovery and event (insidious gaps in life) as I do—“Surely this can’t really have happened, this seemingly lost American couple coming across your play in Bavaria without a clue of what it was about! And you knowing nothing of it whatsoever. You made it up. You wrote this,” he proclaimed. “No one will believe you didn’t. It’s like all the stories in your memoir!”

“I know,” I concurred. “But you and I both realize that I didn’t fabricate a single moment of my adventure in New York with you. And I haven’t knowingly made up anything in any of these volumes to date. Things just happen to me that way. It’s my life.”

“I think they do happen that way to many people,” Paul concluded, “only they block it out, rationalize it away or perceive no significance in the facts.”

Yesterday, as I was about to write about this newest manifestation of my wondrously eventful life, I received an e-mail from Joshua Amrhein, outlining the details of his directorial choice and the performances of my play. Apparently, he’d first dis-covered my short plays, A Dog Tries to Kiss the Sky: Seven Short Plays, in City Lights bookstore in San Francisco, and had thought about performing “Past Present Future Tense” or “A Dog Tries to Kiss the Sky.” “The plays…had an American kind of humor I thought, just ‘dada’ enough for my taste and approachable enough for any audience.” “Well, I wanted to see what else you’d written, and found The Confirmation. Besides really liking the story, and all things to do with grandmothers in general, I felt it was a perfect piece to do with a group mainly made up of women….” “My actors loved it,” he reports, and it beat out David Mamet’s Water Engine. Hearing his response, I could only recall the reaction of my German friend Hans-Jürgen Schadt upon reading the comedy: “I found it very sad, very sad, while my wife kept laughing out loud the whole time.” Perhaps some Germans do share the American sense of humor.

Amrhein apologized for not trying harder to reach me—he had evidently sent an e-mail which I did not receive. I reported that my only regret for not having been told about the production—although an amateur performing fee would be appropriate (he is sending a small payment)—was that I might have flown to Passau to witness it! I was delighted by the production.

We turned Blanche from a Yiddish speaking character, to a Polish figure, he explained, in part because we had a Polish actor playing the part. Coincidence, again, I responded: I originally wrote the part for a Polish actor I had seen in one of Mac Wellman’s plays; she was out of the country, however, during the July 1994 production of that play in New York at the Vineyard Theatre near Union Square.

And who was that visiting American man and his wife from St. Petersburg? His grandfather, who was overjoyed that I had stumbled upon his blog and that he’d been able to be the conduit between author and director!

Soon after writing the piece above, I received an e-mail from US playwright Jeffrey M. Jones (whose plays Love Trouble and J. P. Morgan Saves the Nation I published on my Sun & Moon Press label). He reported that his 16-year-old daughter (“who is absolutely smashing in every way, except when she is cross with her parents), now in her junior year at La Guardia High School of Art, Music & Performing Arts in New York, had been involved with a public showing of her class’s scenework. Students chose their own works, some of which—excerpts from Paula Vogel, Tennessee Willliams, Martin McDonagh, and Adam Rapp—were “what one might expect.” “But the second selection was a very odd piece about a grandmother who had apparently taught one child to speak only Norwegian.”

“I thought there was something awfully familiar about the author’s name, but the context was so astonishing,” wrote Jones, “I had to make sure that Keir Peters was indeed who I thought he was.”

American theater, evidently, is alive and well at La Guardia High School as well as in Passau, Germany!