Laika, suited up for flight 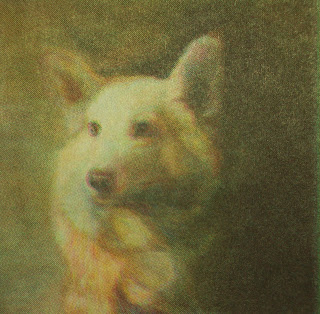 On November 3, 1957 Laika, a mutt found on the streets of Moscow and trained as a canine astronaut to survive the sense of weightlessness and other atmospheric conditions, was blasted into to outer space on Suptnik 2. Soviet Premier Nikita S.Krushchev had insisted the Suptnik voyage be launched earlier than scientists had wished in order to celebrate the 40th anniversary of the Bolshevik Revolution. The dog, now a major hero of Russian history, survived the weightlessness but was overcome by heat some hours after launch, and was burned up with the satellite as it re-entered the Earth’s atmosphere. Laika (the Russian word for “barker”) was proclaimed a hero and to this day is memorialized and beloved by the Russian people.

Previously, on test flights, two dogs, Tsygan and Dezik flew with the first suborbital flight in July 22, 1951. Both survived, and Dezik was sent into space again, this time with Lisa; these dogs were killed when their parachute failed to deploy. Tsygan, who remained on the ground, lived to an old age. Albina and Tsganka were later blasted into space at an altitude of 53 miles. Both these dogs were safely recovered.

In July 28, 1960 two other dogs Bars (Panther or Lynx) and Lisichka (Little Fox)—like all the dogs in the Soviet program, products of Moscow’s streets—were launched in an attempted flight of the Vostok prototype. The booster exploded during launch, and both dogs were killed.

Sputnik 5 was launched on August 19, 1960, carrying two more Moscow dogs, Belka (Squirrel) and Strelka (Little Arrow). After spending a day in orbit, both dogs were safely re-overed. However the December 1, 1960 launch of Sputnik 6, holding Pchelka (Little Bee) and Mushka (Little Fly), who spent a day in orbit before being burned up with their craft during reentry.

On the 50th anniversary of the first Suptnik flight (October 4, 1957) and of Laika’s November 3rd voyage that year, and in a year in which my memoirs had taken the metaphor of the dog as its organizing theme, I felt it only appropriate to memorialize those tortured beasts. Fortunately, moreover, Los Angeles is blessed with a strange “cabinet of wonders,” as author Lawrence Weschler has described it: The Museum of Jurassic Technology, a labyrinthine collection of wondrous inventions, works by nearly mad scientists and just plain technologically-interested kooks. Accordingly, after a reminder of their existence by the New York Times, one sunny Friday noon I found myself climbing that Museum’s stairs to a miniature salon where kitschly conceived portraits of Laika, Belka, Strelka, Zvezdochka and Uggolyok line the walls. These paintings, according to artist M. A. Peers, gave her an opportunity “to paint straight dog por-traits without irony and rely on the Jurassic to provide the context.”

I’m not sure I came away from the ox-blood, darkened room with any insights to these mut-tniks, as the American press referred to them at the time. I felt more pity, parti-cularly for Laika, than any other sentiment. But just knowing they were there—these ridiculous testimonies to man’s “new frontier”— left me with a sense of a bemused satisfaction.

I remember most of these dates well, having been encouraged in 5th grade to keep a daily diary of important historical events. And I remember writing down in wonderment the words Sputnik each time one of many versions of that word were catapulted into space. In 8th grade, moreover, I had entered the Civic Oration Contest (sponsored by the Modern Woodmen of America—to this day I can’t imagine who these strange “woodmen” were; I have always imagined them, like the tin man of The Wizard of Oz, covered from head to heel in metal).That year’s theme was “Space, Man’s New Frontier,” and I must have blathered on, I am sure, with patriotic platitudes about the great future we faced in outer space travel. I do recall gushing about the advances made by Dr. Werner von Braun. In any event, I won the contest, which I am sure is one of the reasons why I am writing this piece today!

As a final statement about a world that has gone “to the dogs,” I came upon an essay in the January 8, 2008 Los Angeles Times by Megan K. Stack about the Moscow subways. The vision she presented of the subways running below the “lawless and mad, cold and rich” city above (Moscow is now the most expensive city in the world) reminded me of the utter poverty I witnessed there on my 1989 trip to the then-Soviet Union. Stack describes the masses of working class Russians under the now-dimly lit chandeliers of the once acclaimed Metro in a mad swirl around their less fortunate compatriots—beggars, drunken men and women, and an old woman whose back “was so hunched she couldn’t get her chin off her chest” surrounded by “mean-looking teenagers in scarred leather jackets” who scrape together change to give her. In a world of such struggle and survival, the condition of animal life—even in a city that still venerates its mutniks—seems of little importance. Poignantly, Stack describes a stray dog, limping confusedly on three legs in the tangle of turnstiles.” “His front paw dangled. It appeared to be split in two, dripping blood, as if somebody had stomped on it. He was glancing around desperately, as though he was looking for help.”

Without any idea of how to save it—it was too big to carry and she had no idea how to find a Russian vet—she nonetheless looked for it only to discover it has melted into the crowd. The image haunted her all day, and when she described it to her Russian teacher, the woman gave her “an incredulous look”: “But the people you see on the Metro have horrible problems,” she reproaches. Stack’s later breakdown into tears reminds me of my response to an abandoned child on the streets on Sāo Paulo [see My Year 2000].

Perhaps it is fitting, in the context of this painful image, that I stand this year’s metaphor on its head and drink a toast to those poor animals who have so fatally linked their fates to our species: “To the dogs!”
Los Angeles, January 12, 2008
Posted by greenintegerblog at 8:34 AM