Five Tales from Ischia: the 4th Tale (Cities of the Dead) 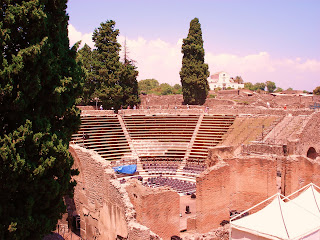 The ampitheater at Pompeii 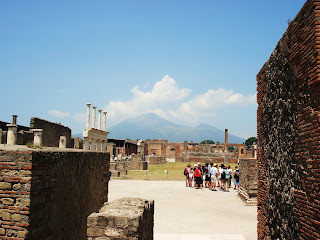 Pompeii ruins with Vesuvius in the background 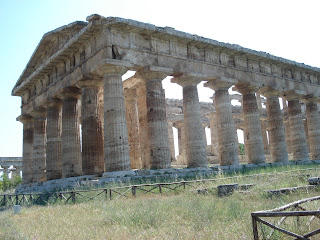 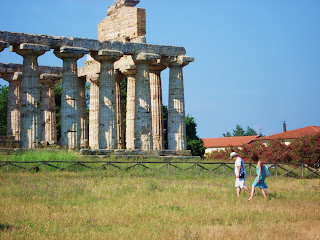 Marty and Rebecca entering by the Temple of Athena

I walked very slowly to the far end of the site, discovering a beautiful tree-covered ristorante with a bar at the far end, where I sat down and ordered a campari and soda. After finishing it I returned to the park, having seen almost all of the major sites. I tried to dawdle, even loaf as best I could, wandering back toward the first gate, where the lovely white Temple of Athena stood. But all of this took only about thirty minutes. There—as I had predicted—came Marty and Rebecca, having finally entered the place.

I’m not complaining in reporting this; their sense of time was just different from mine, and as much as I tried to accommodate for the strolling-wandering life, I remained more clock oriented. I was impatient. But they so enjoyed their journeys, and the two of them were so similar in their patterns, that it was really was quite lovely to observe their peregrinations.
I left the park and sat at a café with another campari. Fortunately, the drink is light and not terribly alcoholic (and relatively inexpensive—each about 4 euro). I waited forty-five minutes longer for Marty, Rebecca, and the students to return. Then, as I had predicted, they had to have gellati, buy some water, and wander about the tourist shops a bit more! We left Paestum finally, at my urging, at 6:30 p.m.
Almost immediately we were in a long line of cars stalled bumper to bumper to Salerno and the entrance of the autostrasse. We thought perhaps that it was the pay lines at the entrance that had so held back traffic, but after about an hour and a half, we saw that it was the autostrasse itself that was backed up! We entered the highway and sat in bumper to bumper autos for 5 ½ hours all the way to Naples (what might normally have been an hour trip)! Of course, we had to stop for the bathroom along the way, and everyone was hungry again (except for me), and it was now clear that we probably would miss the midnight boat. There was nothing any of us could do but tell stories, sing, and laugh. Indeed, we had such a raucous time that Daniel suggested we meet again the next day in a car and “just hang out!” Our imitations of various family members might have made for a hit comic-skit.
Finally, we arrived in Naples, where all could observe that Marty was utterly exhausted as he seemed almost to change personalities, doggedly determined to get to the garage where we were to leave our car. The closer we had gotten to Naples, the more crazily he had begun to drive, and by the time we entered the city again he was a Neapolitan, speeding down streets on the left side of the road through red lights, traffic and anything else that crossed our path as we made our way back to the garage. I suggested he should be awarded a medal for all the driving he had done.
At the garage, they called for a taxi, which soon arrived. If Marty had developed some Neopolitan techniques of driving, we suddenly realized that the taxi driver was the “real thing.” Yet he was also used to tourists and respected their fears. He calmly drove a block as Marty explained that we were attempting to make the last ferry from Bevellaro. He turned back to the rest of us and beseechingly requested: “Permisso?”
The kids were confused, but I knew exactly what he meant. Marty and I shook our heads in reply: “Yes, permisso.” Suddenly we were tearing through the streets jutting in and out of traffic, ignoring every red light, missing other cars my inches, jumping over medians, and generally creating havoc in space. Each time he broke through the traffic, Michali (taxi drivers each tell you their name, as if it were a personal relationship with them that you had established by entering their cab) shouting “Permisso!” Laughing joyfully, like a terribly bad boy, he sped on. I believe we had clipped at least two cars along the way. We now realized that, although Marty had passed all the tests for Neapolitan driving, he was not yet a full-fledged citizen! The ride was breathtaking, as if he had gone into some amusement park—“the taxi ride!” Disneyland should add it to their fantasyland park.
We arrived at Bellevaro just in time to get tickets to the last boat to Ischia—not to Florio, but to Porto Ischia. It didn’t matter; we’d make it home that night.
The boat was a comfortable one, much nicer that the one I’d taken that first day, and roomier than the hydrofoil we’d taken across three days earlier. We also stopped, as I had on that first day, in Procida, that beautiful little town. I tried to snap some photos with the night vision setting, but the shutter took so long, that any hand movement blurred the image.
When we finally arrived at Porto Ischia, the Nakells were determined to stop for pizza, but the students and I desperately needed a shower and bed. I was one of the first ones off, quickly capturing a taxi. The others were the last to leave the boat—indeed all passengers had departed about 15 minutes before these stragglers finally dragged themselves forward, nearly frozen in space once again!
As the three of us sped away to Florio, Marty and Rebecca, looking like exhausted refugees returning to their homeland, trudged down the street for their 2:00 snack! I think perhaps Marty just needed to decompress a while before entering another car!