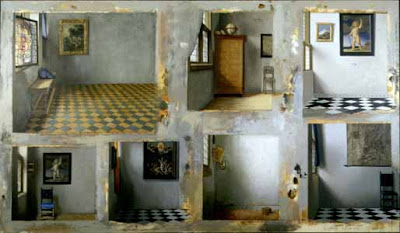 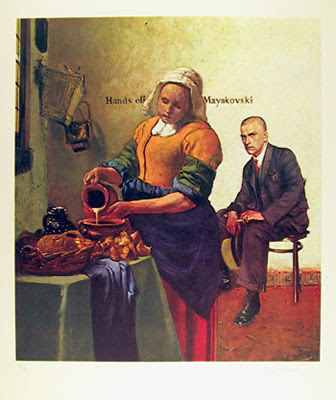 On May 12, 2008, I received a manuscript from the artist George Deem titled Hey Nurse I’m Worse, consisting of what he described as “painter’s book” of writings and images.
I had known George for many years, dating back at least as early as the publication by Sun & Moon Press of his companion-assistant, Ronald Vance, whose I Went to Italy to Eat Chocolate, I produced in a side-stapled volume in 1978, the covers of which consisted of m hand-colored map of Italy. I also published a poem of George’s work in an issue of Sun & Moon: A Journal of Literature & Art.
I met both George and Ronald soon after in their New York apartment, and then, over the years lost direct touch with them, although George continued to send me announcements of his art shows and catalogues.
In 2001, I attended Mac Wellman’s dance-drama, Antigone, where I was seated next to a handsome, somewhat elderly man, who looked strangely familiar. During the intermission, we spoke, and he admitted that I too took looked familiar. It turned out to be George Deem.
Although I was enchanted by his new manuscript—which began with selections from George’s various artists’ books, one group titled, “Three Painter’s Daybooks,” and ended with “Yankee Vermeer” of 2007, depicting a scene from a Vermeer painting with a man dressed in a Yankee uniform attempting to peer through one of Vermeer’s draped windows—I knew immediately that I would be unable to publish the work. Such a publication needed a larger format than my small Green Integer volumes, and it would be absolutely necessary to print the book’s many art reproductions in color, unaffordable on my budget. Accordingly, I set the manuscript aside, planning to write George a long letter expressing my admiration of the collection, but also explaining why it was not a suitable title for Green Integer.
As often occurs in a business centered upon correspondence, a few weeks quickly turned into months. In early August, I determined to catch up with back correspondence, but this time issues of my health intervened. I was taken aback, therefore, to read in the New York Times of George Deem’s death, at the age of 75, on August 11, 2008.
As the Times noted, Deem’s art was thoroughly involved with a “visual commentary on the history of painting.” Often beginning with masterworks by Caravaggio, Chardin, Ingres, Homer, Matisse, Picasso, and Vemeer, Deems—painting in the manner of the great artists—wryly subtracting elements from the originals, adding figures from other periods and cultures, or recombining aspects of the original masterworks with contemporary pop images. Deem’s anach-ronistic paintings and drawings were rendered so believably—Deem was a master of reproduction—that rather than jarring the viewer, the artist enticed him into the frame in a search for what one inherently felt was wrong with the picture. That search, in turn, often led the viewer on to a series of discoveries and other questions. Italian Vermeer (Caravaggio), for example, suddenly reveals what the Dutch painter’s darkened rooms might have looked like under the flow of Italian sun. A work such as Still Life with Egg—which features an egg on the edge of a plate, above which hangs either the painted image of the same scene or a mirror reflecting that image back—calls up all sorts of issues of art history relating to still lives, particularly invoking Magritte's C’est ne pas une pipe.
Accordingly, through his combinations of art and literary figures and the questions his “recreations” evoked, Deem’s art altered time and history, making us see what we thought we knew in entirely different ways and from utterly different perspectives. Moreover, as Vance commented on his friend: “[Deem] was interested in the dimension of time. He wanted the viewer to experience not only the painting in front of him but also the referenced works that came before.” And in that sense, Deem’s art was not only concerned with an alternating past time, but in actively linking that past with the present.