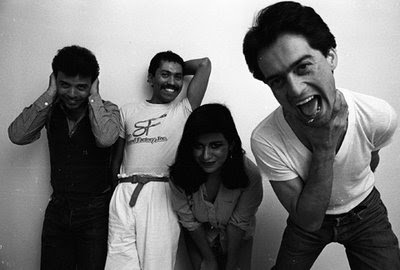 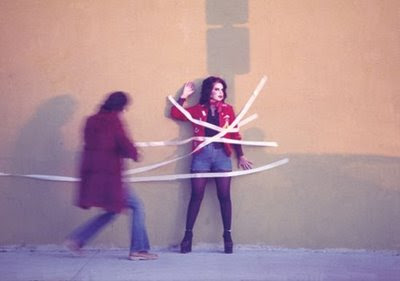 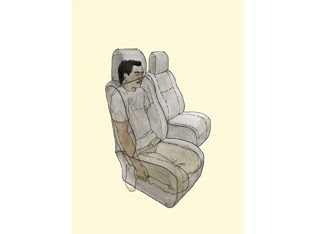 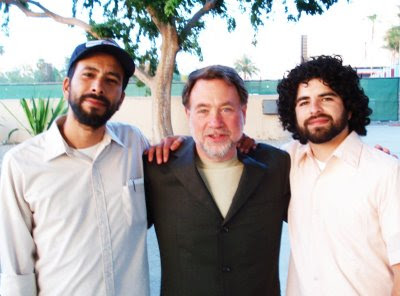 Scoli Acosta, Howard Fox, and Gary Garay, at the opening of the show
Photograph ©2008 by Douglas Messerli 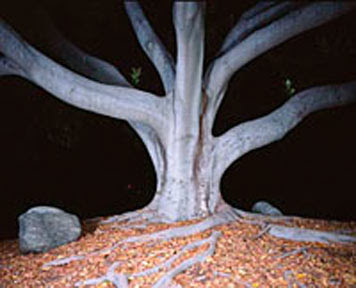 The art show Phantom Sightings, curated by Rita Gonzalez, Chon A. Noriega, and my companion Howard N. Fox, opened at the Los Angeles County Museum of Art on April 6, 2008. Because my companion Howard had such a major role in this show, I had determined that it would be inappropriate for me to write about it. But as the months passed, it became more and more clear that the kinds of shifts in perspective experienced by the artists in this show closely paralleled those changes I had outlined in my essay in 2008 on Richard Bruce Nugent and his friends in the Harlem Renaissance. If there were ever a series of events, moreover, that revealed a culture “in the gap,” so to speak, it was represented in the art and artists of this show.
All three curators go out of their way to clarify that although the 31 artists represented in this show have strong links to the earlier Chicano art movement, it is clear that the kind of essentialist art, that is an art that celebrated Chicano identity and mythologized a vision of Aztlán, “conceptualized as the Mezo-American empire that extended from the centers of Aztec civilization into El Norte—the geographical territory that predated the Spanish conquest of Mexico and which now includes the Southwest United States has been replaced—at least by these transitional and younger artists—by what Howard describes in his essay as “how Mexican Americans experience life and identity in a diverse social multiformity—a demographically unstable, ideologically unsubmissive, and recklessly creative American culture in which individual group identities may be calibrated and constituted in many ways, through countless filters and prisms, and in relationship to others’ individual and group identities—identities, plural.” Rita Gonzalez, from a slightly different perspective, argues for similar differences:

Informed by an awareness of transcultural currents, artists in this exhibition
create ‘impertinent and out-of-bounds ethnic visions’ that veer away from
ethnographic or social scientific studies into ‘real and surreal visions, absurd
visions of actual events, [and] symbolic interpretations’ of the city. [her quote
from Harry Gamboa, Jr., Urban Exile: Collected Writings of Harry Gamboa, Jr.]

Encapsulated in a larger society that often confuses and interfuses Spanish-speaking, Mexican, and Mexican American identities and living in a country in which only a handful of states in the West and Southwest are primarily effected by their multi-cultural identities, Chicano artists, despite their significant artistic contributions, were often seemingly invisible, unable to gain access to major galleries and museums.


In the first generation of the shift away from radical Chicanismo, artists of the Asco group (the Spanish word for nausea) recaptured public space and reclaimed the museums through interventions such as their 1972 guerrilla work in which they spray-painted its members’ names on the exterior walls of The Los Angeles County Museum of Art and numerous seeming spontaneous enactments such as their First Supper (After a Major Riot), a formal dinner performed on a traffic island on Christmas Eve 1974 and their Instant Mural of the same year, in which Gronk taped Pattsi Valdez and Humberto Sandoval to a wall with duct tape.

Although the image is clearly a clever statement on both the role of some art in society and the effect of that position upon the artist or subject, Gronk emphasizes the performative aspect of the work:

Patssi always gets asked: Why did you let them do that to you? Oppression affects
everybody. It doesn’t know sexuality. Patssi’s on that wall, but in a short amount
of time she breaks free of the red tape. Some people get trapped in their community, or
a group, or a country, and are unable to leave it. But the bottom line here is: she
breaks free.
Through their usurpation of public spaces and performative interventions throughout Los Angeles, the Asco group set the stage for a new art that was less an expression of whatever one might define as a Chicano sensibility than a redefinition of the Chicano experience in contemporary culture, an art that recombined, shifted, and redefined how Mexican American artists might express both their changing identities and manifestations of those identities through art.
As all three curators point out, these expressions, like those of the Asco artists, often existed outside of the traditional museum and gallery settings. And rather than creating a essentialist Chicano identity, these artists worked with elements of their culture to reshape and remake an art that both poked fun at and richly resonated with and against the culture at large.
Like the Asco artists, moreover, the younger figures of the Phantom Sightings show, often transformed the appearance of and the places in which art was transacted. Their art, in short became an art of unusual appearances in unexpected places.


Sandra de la Loza, “surreptitiously and without permission,” posted in her Operation Memorial Monument commemorative metal plaques in the rail yards and on the exterior of buildings, such as Olvera Street’s Italian Hall, in which was housed David Alfaro Siquerios’s 1932 mural, Tropical America, seen as a denouncement of American society, was whitewashed within a year after its completion. Most of de la Loza’s placques have been removed, but continue a quiet existence on her web site and in published photographs.
San Antonio-born artist Alejandro Diaz, like the artists of Asco, intervenes on the urban landscape with photo-documentation of performances such as his New York-based Make Tacos Not War of 2003. Also using photographs, Christina Fernandez reinacts personal histories of herself and her family as in her Maria’s Great Expedition, in which she retraces her grandmother’s voyage from her Mexican hometown to the United States in 1910 and in a series of photographs, Manuel S-t-i-t-c-h-e-d, documenting issues of hidden labor by representing nameless buildings in East Los Angeles that unexpectedly contain sweatshops for garment workers.

Carlee Fernandez, documents her own body in photographs in which she is transformed into other beings (pop stars and her own father) and beasts (as in Bear Studies of 2004). Dressing up to look like a picture of her father, Fernandez, in a sense, reveals her own connections with the beloved figure and metaphorically becomes that person in her photographic transformation.


Ruben Ochoa literally transforms and changes the urban landscape in his Freeway Wall Extractions, in which he applied digitally printed photographic foliage along parts of a retaining wall of Interstate 10 in East Los Angeles; the effect was to erase the concrete barriers that stood as gaps between parts of the city, seeming to replace the concrete with a return to the natural beauty of the landscape.


Others of these artists begin with icons and everyday images of Chicano culture, reconverting and recombining them to create absurd and/or phantasmagoric images. Invoking photographs posted on the United States Customs and Border Protection website, Julio Cesar Morales creates stunningly beautiful, if surreal images of illegal aliens hidden in car seats, and even in large piñatas as they attempt to cross the border. There is no better image of a “phantom sighting” than Morales’s plainly hidden and trapped individuals, caught in their very invisibility.

Ken Gonzales-Day appropriates picture postcards issued upon lynchings of Mexicans and Mexican Americans in California during the 19th and early 20th centuries. Such postcards of public hangings were quite popular in their day, and were sent around the country with an apparent sense of justice for those that commemorated these brutal events. In Erased Lynchings, however, Gonzales-Day subtracts the hanged figures, correcting and rewriting history by focusing the viewers attention on the modus operandi instead of the event. In Hang Trees, on ongoing project, he has traveled throughout the country, photographing the original sites.

Playing with the popularity of lowriders, “the elaborately decorated, customized automobiles popular among Chicano—and increasingly among non-Chicano—youth,” Ruben Ochoa and Marco Rios create a metaphorical Valhalla for these youths—or at least a chariot to take them there. In their Rigor Motors of 2004-06, these artists hilariously recombine the automotive culture with death itself, transforming not just everyday experience, but the ultimate destiny of human beings.

Such wild and unexpected interventions and transformations exist everywhere in the art of these younger Chicano artists. And one hopes that their unusual appearances in unlikely places continue to astound their audiences for decades to come.