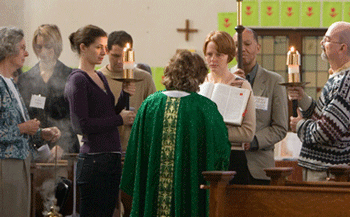 Alison Cheek celebration communion at the Church of St. Stephen and the Incaration in Washington, D.C., November 1974

Throughout our years in Washington, D.C., Howard and I—primarily through his role as an art curator—were invited to numerous embassy parties. At some point in the early 1970s, for example, we were invited to several events at the Australian and New Zealand embassies. Occasionally those invitations were even extended to the personal residences of the ambassadors of those countries.

The Aussies, I remember, were somewhat like American frontiersmen, a bit fearful of “high cultural” events. At one particular occasion, the evening began with a concert, whereat the wives of the various embassy officials sat dutifully attentive, while the men rambled about in an adjoining room, drinks in hand, impatiently awaiting the concert’s completion.

The New Zealanders, on the other hand, although completely unpretentious, were highly interested in culture. I recall a long discussion with the Ambassador’s wife one evening about the writer Janet Frame, whom she described as a “dear friend.” The food, which consisted of platters of slightly greasy lamb chops, may have been somewhat unsophisticated, but the conversation was another thing.

I don’t recall to which ambassadorial home we had been invited in December 1974 to a Christmas party, but it was one of those Washington, D.C. townhouses where such parties were celebrated downstairs, in what normally might have described as a basement, but had been so redecorated that no one could hardly think of it as such.

There I met the representative of the Federated States of Micronesia and another Oceania leader. Howard and I spoke with both gentlemen for some time.

But gradually, as one does at such events, we broke off into other groups, I noticed a gathering of individuals standing around a plain-looking but friendly woman. I joined them, listening in upon the conversation. Clearly, this woman had just received some high accolade, and the women surrounding her were curious about how she had reached this position. Gradually, I began to understand that she was somehow involved with religion, and few seconds later I realized who she was. At the very moment, Howard came up to the group, standing next to me, hoping, I presume, for an introduction.

The woman continued to speak intensely about how she achieved her position, using, over and over again, terms such as “those against change” and “one’s enemies.” At one point, she began a short diatribe against “one’s enemies,” chastising those, apparently, who refused to accept change.

Howard is a born diplomat, a careful but easy conversationalist, unlikely to say anything that might offend. But perhaps because he had still to be introduced to this slightly garrulous individual, or just out of an uncontrollable urge, he suddenly blurted out: “One’s enemies can go straight to Hell.” Suddenly all faces turned to him in apparent shock, and he quickly recognized that he had said something out of turn. He smiled and quickly fled the little clique, as its members turned back to continue their discussion.

I gradually shifted away from the group, cornering Howard alone. “What was that all about?” he innocently asked.

I began to laugh. “Well, Howard, I don’t think you could have chosen a more ill-suited phrase! Do you know who that is?”

“It’s Alison Cheek, the Anglican priest, the first woman to celebrate communion in an Episcopal church.” In January 1975, Time magazine chose her as the Person of the Year.

At the party, we returned to the conversations about Melanesia, Micronesia, and Polynesia, safer ground on which to talk.