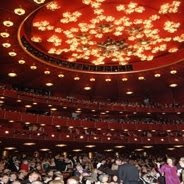 In the graduate student bullpen I shared with others at the University of Maryland, a large basement room crammed full of desks, I became friends with Donald Duncan. Duncan had been in a couple of seminars I'd taken, and he was interested in theater and opera. Moreover, he worked regularly as an usher at the Opera House of the Kennedy Center.

Some time into our friendship, Duncan suggested that Howard and I come one night to the Kennedy Center to meet the head usher, Pat, since she often was able to find free seats for those recommended to her. Howard and I had attended a number of events of the Center, but on our teaching assistant salaries we could simply not afford to go to the theater, opera, etc. very often. Pat took us to her hearts the very first time we met her, and over the following months we able to see numerous plays and performances—including productions of Salome, Cat on a Hot Tin Roof, The Bolshi Opera's Eugene Onegin, Moon for the Misbegotten, and others—for free.

Despite Pat's great friendliness and seeming affection, however, both Howard and I felt somewhat guilty for the pleasures she offered us, and we alternated the free events with ones for which we had paid. In fact, we probably spent more money on drama and opera than we could afford.

Moreover, when we did attend we were often asked to join Pat and Don with cast members at nearby bars and restaurants after the performances. Although these were generally enjoyable events—I recall a long conversation after Cat on a Hot Tin Roof with actress Elizabeth Ashley, who we had also seen in Wilder's The Skin of Our Teeth—everyone had to wait for rather long periods for the actors to remove their makeup and for the closing down of the theater before we could began our group treks to the selected locations. And once there, Howard and I felt beholden to pay since, after all, we had been given "free tickets." Accordingly, we often spent more money on these after-theater celebrations that we would had we simply paid for the tickets in the first place.

There is no question that there was something exciting about these seemingly covert acts; we were always seated or positioned at the very last moment before the curtain rose, one time taking over the President's box in the balcony, at the Bolshoi production standing behind the last row of the orchestra seats until it became clear that there were two empty seats in the house into which we were clandestinely moved. Yet this very sense of undercover theater-going also made us uncomfortable. Was there danger should the management discover our secret? Probably not; I am certain most theaters have such arrangements, if for no other reason than to fill the house.

But with the often added cost of food and liquor, the late hour of our returning home, and this sense of discomfort, we began to take less and less advantage of this gracious arrangement. And over the period of about a year we stopped going, feeling somewhat guilty, given the generousness of Pat and her staff, for even attending as paying members of the audience. Were we rejecting the kindnesses they so readily offered us?

So, I recall, it happened that we began attending more theater at Washington, D.C.'s famed Arena Stage and the theater at Catholic University than at the renowned Kennedy Center.