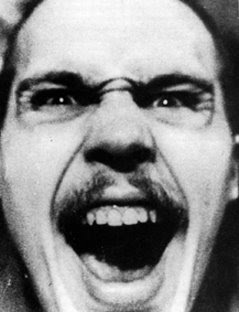 I had known Fluxus poet Dick Higgins for several years, meeting him several times at small press book fairs, where he showed books published by his renowned Something Else press (which published Gertrude Stein, Marshall McLuhan, Emmett Williams, Claes Oldenburg, George Brecht, and Ray Johnson, among others). I also published a story by Higgins, “The Truth about Sadie Mee,” in the fiction/narrative issue of Sun & Moon: A Journal of Literature & Art, 6/7 (1978-79). But I did not know Dick well, and our correspondence over the years had not been extensive.

I did know that early on in his career, Higgins he had studied with John Cage, and in 1960 he’d married Alison Knowles, with whom he later taught at CalArts near Los Angeles. Yet I hadn’t followed his writing or performances over the years. Recently he had sent me a gay story that rather startled me with its porno-like content. I wrote saying that I felt it wouldn’t work for Sun & Moon. Dick wrote, explaining that he had recently realized that he was gay!

Later that same year in 1980 someone at the Folger Shakespeare Library—a noted D.C. institution, recognized for its remarkable Shakespeare collection and productions of his plays—called to ask if I might introduce Dick Higgins at his reading there in a few months. At first I was simply surprised to hear that such an august and orthodox institution had invited a figure such as Higgins to perform; my first reaction was to explain that I was not well-acquainted with the author or his work. Yet I quickly comprehended that the Library was perhaps finding it difficult in Washington to even come up with someone who knew his name! Ultimately, I agreed to introduce.

On the day of his reading, I picked Dick up for lunch, at which time I hoped to discuss with him some details of his life. But he spent most of the afternoon discussing his new lover, a boy named Roger, who, he almost proudly declared, he had met through his daughter. “She came home with this boy,” he chuckled, “and I took him to bed. It seems amazing that he found me attractive.”

“Yes,” it did, I thought to myself when I encountered the willowy kid. Soon after, I began to realize that one of the enticements that Dick had provided him was a constant source of marijuana.

Roger, evidently, was a drummer, and Dick intended to employ him in the performance. Higgins gave me a large hardback publication which he had recently published containing numerous photos of their “performances to the sun,” Dick looking up at the skies, Roger, stark-naked, beating upon something that looked to me more like a can than a drum.

I had a sinking feeling that Dick’s infatuation might not be so easily assimilated by the Folger Shakespeare crowd.

I introduced him as best I could, noting his remarkable career and pointing to his evident achievements. Dick stood and began to read. So far everything was fine. But then, he announced, that several of his works featured an accompanist, and Roger, dressed in white T-shirt and blue jeans, was called out to pound the drums. Several of the audience members’ faces turned pale, others had frozen in rigid smiles.

A short while later, Roger was called out again. “Roger, Roger,” Dick called. But no Roger appeared. “Roger, Roger,” he repeated. Still no drummer in sight. Finally, the boy stumbled out from backstage ready again to thump upon his instrument.

After a brief intermission, the remaining audience members returned to their seats to encounter yet another piece featuring the duo. “Roger, Roger,” Dick screamed out. Once again, Roger did not appear. “Douglas,” Dick called over, “will you go back and bring Roger out?” I found the boy huddled in a corner puffing away. “You’re wanted,” I told him. He stood and shuffled off.

I returned to my seat, somewhat red-faced, but still delighted that Dick had dared to confront this obviously puzzled room of people with something different from their previous experiences.

Later that year, I was asked to return to the Folger, this time to introduce my dear friend David Antin. Things were apparently changing, and a few years later my friend and former student, Joe Ross, joined the Folger Shakespeare committee for performances.

Posted by greenintegerblog at 7:08 AM