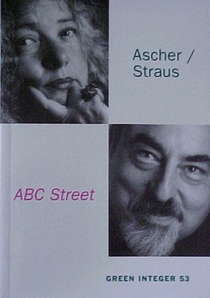 In April 1992 Sheila Ascher and Dennis Straus wrote me to ask if I'd be willing to read a manuscript of theirs, ABC Street. I suspect the manuscript arrived soon thereafter, but in my files the next serious correspondence was dated five years later, July 1997, at which time they sent me the dedication to the book. Only this year (2001) did they send photographs for the cover of the book now scheduled for 2002. My only reaction is that Ascher/Straus must be the most patient couple in the universe, having now waited nearly 10 years for their book to appear—combined with the fact that another manuscript of theirs, to have been issued as a early side-stapled book on the nascent Sun & Moon Press in 1978, was never published!

These incidents are made even more ironic by the fact that, although Dennis and I have kept in fairly close touch by telephone over the years, I have never met Sheila or Dennis, but simply followed their migrations from Rockaway Park and Canaan, New York to Captiva Island, Florida through phone conversations and occasional correspondence.

Given their immense patience, I thought it might be appropriate to at least indicate through this short essay what I found so interesting about their writing, particularly since a history has developed around this work that makes it very appropriate to this year's thematic stitching of My Year.

For despite the rather long relationship I have now had with Ascher/Straus, like the writing itself, it is a narrative without a coherent story. ABC Street is part of an ongoing project on which the two have been working since 1977, titled Monica's Chronicle, a day-by-day journal penned by the seemingly observant, but determinedly passive narrator, Monica. This chronicle alternates between intense depictions of the daily weather—evocative descriptions of the rain, snow, and sun Monica observes through her window and on her occasional walks—and the often gossipy comments of a large cast of characters Monica describes as "A Constellation," mostly lesbian women friends, and the various neighbors of what is obviously a location similar to Rockaway Park.

There are also silences ("Days intervene, unwritten"), undated entries, and sporadic ruminations on the nature of her writing activities. There is a strong sense that in writing Monica is forgetting or, at least, replacing the act of memory with the writing itself. If, as Lyn Hejinian argued early in her career, "Writing Is an Aid to Memory," in ABC Street "Writing isn't an aid to memory, but a replacement for it." History, accordingly, is eaten up by the narrator's acts, and as quickly becomes part of the ongoing snowfall of words that pour from Monica's pen. Individuals and their statements just as quickly are swallowed up into a kind of nonjudgmental commentary.

Just as the landscape Monica describes, the numerous human figures she portrays often collide in the reader's mind as a jumble of abstract flesh. Some families are so extended with sons and daughters, their best friends, various lovers and boarders that, although on the "Monica's Chronicle Website" created by the authors all characters are listed, the reader loses sight of the individual, and ultimately can hear only the chorus of communal voices, which is perhaps appropriate, since all the choristers are themselves singing of one another. Accordingly, although Monica can see Manhattan's Empire State Tower from her window, ABC Street is a tale of small-town living, a world in which everybody is somehow interrelated and involved in each other's lives.

Yet unlike, say Winesburg, Ohio or any of Sinclair Lewis's tales, ABC Street does not comment on or evaluate—and only seldom satirizes— its characters. Rather, they become somewhat flattened reporters of their own destinies without an audience to coherently receive their messages. As Monica describes her own conversation with one of the most memorable figures of the book, Nancy St. Cloud:

It was windy and Nancy's navy blue wraparound skirt kept
blowing open in the middle of sentences. Every time she
reached down words got irretrievably whisked away across
the flat, dazzling surface littered all the way to the horizon
with sparkling bits of green, blue and amber bottle glass, so
Monica remembered the story as incoherent, though it may
not have been.

Unlike the utter falsity of normalized fictions, accordingly, Ascher/Straus's collaborative work is not just a collaboration between authors, but a collaboration between characters and readers. As in our everyday experiences, what we receive from one another is not always what has been communicated—or even what each of us attempted to communicate. People make their own conclusions and impact one another much as in the old game of "Telephone," through incredibly garbled readings of one another's lives by people they have never met.

Although the members of the "constellation" have all had regular encounters with Dr. DaVinci, a psychiatrist influenced by Wilhelm Reich, their psychological interpretations of one another are most often mistaken and motives are regularly confused or, as in Monica's encounter with Nancy's handsome and charming husband, Andre, are represented in multiple possibilities:

(1) Real, husbandly concern. (2) Enlisting the aid of a trust-
worthy friend who happens to be intruding in any case. (3)
Aligning himself with Monica's involuntary look of distress...
(4) Distancing himself (and not only in the eyes of others) from any
accusation of complicity.

In short, in Monica's chronicles of the world around her there are no answers and relationships between people and events are at best tentative.

While normative fiction carefully constructs a set of interrelated histories that ultimately work together to present a vision of an individual or community, Ascher/Straus' work, like the characters and events of real life, keep their histories secret—even while attempting to reveal them. Like the streets and lawns of this primarily wintertime landscape, history is buried under an avalanche of information: readings and misreadings, interpretations and interventions. As Monica writes: "Our lost history is a daily panorama though not necessarily a panorama of the everyday."

Despite the enormous joy of encountering this canvas of colorful characters, accordingly, the reader realizes that in Monica's chronicle there is no way to imaginatively reach out and touch these figures, nor any way to interweave their actions into a coherent or even consistent pattern. Writing is ink on paper, and any narrative, as much as it may seek mimesis, is as absolutely flat as unprimed canvas. At the end of Ascher/Straus's book, Monica closes her winter night's tale with the words:

February turns its sharp edge, black winter on the other side of
the page.

Not only is the tale over, but the human beings it has mentioned have yet to appear, as they stand in wait on the "other side of the page."

I recently came across your blog and have been reading along. I thought I would leave my first comment. I don't know what to say except that I have enjoyed reading. Nice blog. I will keep visiting this blog very often.