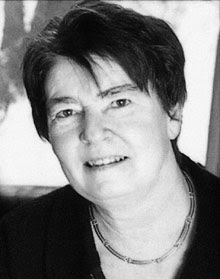 The coincidence of Nicole Brossard’s short book of poetry Shadow Soft et Soif being published at the same time as the Canadian poet and fiction writer’s three fictions, The Blue Book (Toronto: Coach House Press, 2003), gives joy to those, like me, who think Brossard is one of the most outstanding of North American writers.
Like many of her other works, the book is written in a voice that is at once highly lyrical and extremely private. The reader often has the feeling in Brossard’s work that he or she is a sort of voyeur, listening in to an immediate series of events and thoughts expressed by the poet to a loved one. But then, perhaps the reader can also feel herself or himself as the lover, and that creates a kind of sensual thrill in reading her work.
As in her other books, also, there is a feeling of “negotiation,” of the poet straddling worlds. As a French-speaking Canadian, her work in translation often contains both English and French lines. As the title indicates, the shadow about which Brossard is writing is both soft and “thirsty,” something both gentle (as if she had reversed Dylan Thomas’s plea to “not go gentle into that good night.”) yet slightly rapacious. As a poet and fiction writer, Brossard often crosses genres, and in this book she reminds the reader several times that, while it is a work of poetry, it is also a narrative:

In order to create the “shadow” one must have the sun and such oppositions as the morning and evening, the fresh beginning of life and potential death. Love is often proffered and just as quickly pulled away. Order and precision alternate with “avalanches of shattered glass.” Indeed, Brossard’s world is pulled between “pleasure” and “gestures / bites, bedrooms with their shadowy, supple, hollow spaces, knotted brows.”
By the time the narrative is complete and, at the end of the series of short poetic sequences, “night falls,” the poet is left with no answers, only “questions,” lingering “bubbles of silence.” But the language she has used to get there has expanded her comprehension of life. And one perceives that even while the human experience has been utterly fragmented (“nights displace knees,” and “heads or tails” are “scattered”), at dawn once more life is put into motion, “the verb to be courses / in the veins, a heavenly body, it flies / after love or a grain of salt.” The cycle, the negotiation between self and lover, between reader and poet, will begin anew.