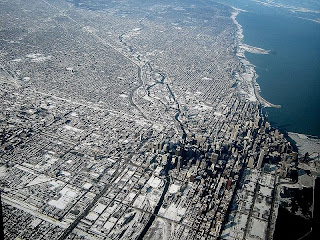 Not since my earliest days of flying has a flight been quite as pleasant. Most of the country was very cold, but the trip occurred over mostly clear skies and, while I usually sit on the aisle, this time a beautiful Black woman—an actress, as it turns out on her way to President Obama's inauguration—claimed the aisle seat, "confining" me, so I first thought, to the window.

For much of the trip, during the flight over the deserts of Nevada and Utah, I read. Despite the rather spectacular scenery of Colorado, I focused instead of Heimito von Doderer's "Divertimenti 4" and "Divertimenti 5." Nebraska in my estimation is a rather boring state from 39,000 feet. I felt much the same, I have to admit, when my family drove through that state when I was a child. But this time I became fascinated with its small towns, whose streets and houses I could just make out, despite our height and the few seconds it took to pass over them. Every now and then the flat perspective I was witnessing would flash into a row of light as the sun suddenly played on the windows of houses and cars below.

Then came the Missouri River as we passed over into my home state of Iowa, with its square-faced division of every country mile and an absolutely splendid vision of the state capital, Des Moines, with a sudden projection upwards of its downtown skyscrapers. I waved to my sister, who works in the city for the State Department of Education.
A few moments later I spotted, a bit higher on the horizon, my hometown of Cedar Rapids-Marion. I threw a kiss to the rest of my folk. Then came the great Mississippi with what I presumed was Dubuque upon its banks.
For a while I returned to reading; von Doderer is a very compelling writer. Just as suddenly I caught a glimpse below of what I knew to be the outskirts of Chicago, and soon after witnessed the vast layout of what used to be called "the Second City." At first I thought we were too far south to be able to see the Center City—but almost immediately after, as if I had donned 3-D glasses, the heart of the city sprang up into dimension directly below, with Lake Michigan following after. I was awed by the beauty of the city.
After Chicago the clouds hovering over the great lake stole my view and I returned to my Austrian master. Von Doderer was lamenting the failure in all of us to enjoy the sensuous pleasures of life. I stealthily glanced out the window at his command to notice a break in the cloud layer and note how cold the water of Lake Michigan appeared dressed in its skeins of occasional ice, just as quickly conjuring up the possibility of crashing into those icy waters. A fearful thought, I said to myself, for no one could possibly survive those frigid waves.
I returned to reading, stimulated with a Bombay Gin (probably the cause for my eating, later that evening, at the Indian restaurant The Earthen Pot on New York City's Columbus Avenue and 72nd Street), witnessing, soon after, the city of Cleveland, which I had previously seen only by bus on a trip back from New York City to Madison, Wisconsin as a young man.
And then, nothing more until we were barreling into Newark, with the sun, appearing through dark snow clouds catching the spectral colors of the rainbow outside my window. How do you explain these sites to a plane load of individuals who have all, save me, closed their small window blinds to watch mediocre Hollywood films, television reruns, computer games, and to sleep?
Our destination reached, I awaited my limousine in the bitter cold for a half an hour, and when I finally hailed the driver, an affable Haitian for whom today was his first day on the job. There had been a huge backup in the entry to the pickup spot and, he excitedly reported, a plane had gone down into the Hudson River! Fortunately, all the passengers, including an infant, had been plucked from the frozen waters to safety. "What a miracle!" he proclaimed, a statement reiterated in the media numerous times the next day.
Having missed the exit to the Lincoln Tunnel, we took the Holland, which to our surprise was free of its usual rush-hour traffic. As any good driver trying to reach the upper West Side might, he opted for the West Side Highway, which also was amazingly quick until we reached 40th Street, whereupon we encountered dozens and dozens of police cars and, soon after, television and radio trucks. The myriad blinking of red, yellow, and blue lights created a strange and almost surreal aura about the place, as, for a few blocks, we were trapped in a traffic jam—which turned out to caused not by the terrifying accident but a collision of a SUV and a large truck. Since the police were all gathered in that spot, however, we were quickly sped around the impediment and for a couple of blocks we raced forward before spying, just to our left, the airplane sinking into the freezing Hudson's waters.
We quickly turned off, moving over the 8th street and up into Central Park West were I was to stay on this visit at the apartment of Sherry Bernstein. Sherry had been worried by my late arrival, had called Charles in alarm. "Had my plane also crashed?" she, like any worried mother, wondered.
I assured her it had not.