The Hidden Self (on Oscar Wilde's The Picture of Dorian Gray) 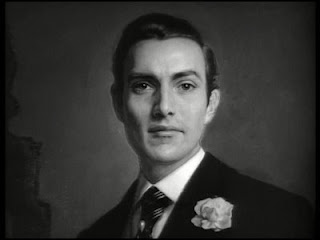 The essay below is one of several devoted to a longer grouping of essays on "Missing Bodies," which also includes "Caligari at the Fair" and "Hiding Out" which appear below.

It may at first seem strange that Oscar Wilde's 1891 novel The Picture of Dorian Gray should center around a work of art that quickly begins to reflect the inner self of its subject, Dorian Gary, particularly given Wilde's insistence on the separation and difference between life and art. As Wilde insisted in the preface to this book, "All art is quite useless," and he admonished elsewhere that it should be admired just for that reason, because it is not life but something finer and of more importance than the real.
Yet Dorian Gray finds Basil Hallward's painting of him extremely useful in that it hides his true inner self from the world, at least if he can keep the portrait out of sight. Any physical evidence of his aging and his increasingly treacherous acts, indeed, have been subsumed by art in this fiction, and by hiding away that reality in his boyhood study, Dorian can cheat the world, despite the rumors surrounding him.
The metaphor here, of course, is not only about his villainous actions—Gray's corruption of friends and lovers, his use of drugs, and other devious transgressions—but concerns his own relationship with Lord Henry, a relationship that might remind one of Wilde's "friendship" with Lord Alfred Douglas.
In one of the earliest scenes between the two men, Lord Henry comes close to Dorian and "puts his hand on his shoulder," and the scene that follows is as close to a love scene—one in which the startled Dorian finds "his finely-chiselled nostrils" aquiver as "some hidden nerve shook the scarlet of his lips and left them trembling"—as the age might permit. A few moments later Lord Henry praises Dorian's beauty: "...You are the most marvellous youth, and youth is the one thing worth having." Soon after Lord Henry Wotton finds himself in near complete control over Gray's aesthetics through his introduction to the young man of what is obviously Huysman's Against Nature, a work that soon after determines Gray's collecting and reading activities. Later in the novel, moreover, we discover that Lord Henry and Gray have been sharing not only evenings at dinners and theatre, but a vacation house. Gray's hidden portrait, accordingly, is a clear metaphor of an entirely closeted self, a hidden self that is not only ashamed of the consequences of his behavior, the suicide of Sibyl Vance and the ruination of several friends, but of its own sexuality.
It is no coincidence, therefore, that Dorian feels compelled to reveal to the artist himself the miracle of his painting, a work which Hallward has described as being rendered with his soul. And the murder of the artist is almost inevitable, given the fact that he has created a monster, an artwork that actually has an effect on life. Had Hallward heeded Lord Henry's (and Wilde's) own statements and created merely a work of great beauty, Dorian might have been spared, simply because his face would have revealed his criminal acts as his own beauty decayed. But Hallward has been so successful in his realism, that, as in a fairytale, he has turned the painting into a kind of fetish that connects it to being itself. Such a transgression, in Lord Henry's critical terms, is necessarily punishable by death. And just as Dorian has "lost" is real body to the painting, so too does he arrange to chemically dispose of Hallward's corpse; after Alan Campbell's "dreadful work," nothing is left of the body.
The consequences also of hiding one's own essence—one's actions and behavior—from the world has long been understood to result to self-loathing, evidenced in this fiction in Dorian's final days, as he, like the thousands of other closeted individuals before and after him, Dorian seeks to cleanse himself of his past. But given his hidden sexuality, it is no wonder that Lord Henry scoffs at his contrite act of breaking off a relationship with a young country woman; and there is something delightfully humorous in that act. It is also predictable, perhaps, that Gray must attempt to destroy "the evidence," so to speak, to wipe away any trace of his own condition, which, obviously, ends in the self-destruction which has all too often been played out in real life. Only through an attack upon the painting can life be restored to its proper vessel, the human body.
Wilde uses the story of Dorian Gray, accordingly, almost as a moral lesson for the dangers of mimeticism. Art, he argues, must remain in its own sphere, in the world of the ideal. An art that attempts to mimic life can only diminish the trials and tribulations of the living.

Posted by greenintegerblog at 7:58 AM