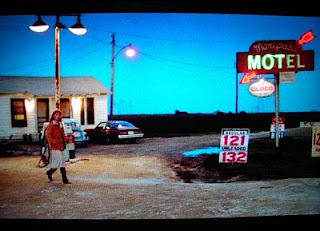 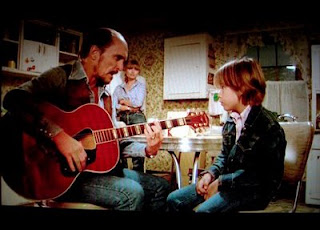 Two years before The Trip to Bountiful, Horton Foote wrote and directed what was perhaps his most successful screenplay, which won him an Academy Award. Like the others of Foote's scripts I describe, the story of Tender Mercies is a simple one, and the actors, particularly Robert Duvall in the role of country-western singer Mac Sledge, are so laconic that at moments there seems to be no story to tell.
Famed country singer Sledge has fallen into an alcoholic chasm, destroying his marriage to fellow country singer Dixie Scott (played by Betty Buckley) and alienating him from his daughter, Sue Anne, whom he has not seen in over eight years.
As the film begins, Sledge loses even his drinking partner, and is left alone in a rural motel without money or means of transportation. The hotel owner, Rosa Lee (Tess Harper), a widow with a young son, offers him two days and some food which he parlays into a part time job working in exchange for room, food and $2.00 a day.
Sledge befriends Rosa Lee's boy, Sonny, and a romance between the two adults develops—so quickly, indeed, that we hardly notice it until he announces his desire to marry Rosa Lee; before we have even assimilated that romance, moreover, the two are described as being married. Most of the "action" of this film, in fact, occurs offstage, with the major onstage movements consisting of Rosa Lee ironing and Mac repairing doors, gardening, and traveling into town to pick up seed.
Little by little, however, we piece together his tragic past: a successful singing career that ended in his alcoholically-charged near-murder of his former wife. His new relationship with Rosa Lee, however, is a sustaining one that allows him not only to overcome his alcoholism, but gradually admit that his misses singing and composing, both of which he has continued on the sly. It is clear that without accepting his past, his present identity is in question. As a town local shouts to him: "Hey, mister, where you really Mac Sledge?" His humorous answer reveals his dilemma: "Yes, ma'am, I guess I was."
As word gets out of his whereabouts, journalists and admirers seek him out. While he rejects the former, he accepts the friendship of four local singers, the Slater Mill Boys, to whom he gives permission to perform his song, and with whom he ultimately sings in a local gig. In the offing is a record.
When Dixie performs in nearby Austin, Mac attends the performance, hoping to get a chance to see his estranged daughter, but Dixie furiously sends him away. A few days later the daughter escapes her mother's guard to visit the father, but the silence between them offers neither much to go on. The next day, the daughter runs away with a singer from her mother's band, and soon after is killed, again "offstage," in an automobile accident triggered by her husband's drinking.
The film ends in two long distant shots of Mac and Rosa Lee digging in their garden as he discusses what he sees as the unfairness of life. "I don't trust happiness. I never did, I never will," he proclaims. A few minutes later, however, Sonny discovers a football Sledge has bought him, and the film ends with son and father throwing passes, Rosa Lee fondly smiling, basking in the glow of a normal and good future for her family.

If, as I have argued in my discussions of Foote's other two screenplays, that they end in the status quo, in Tender Mercies we witness a change—a change that the filmmakers apparently perceive as better than the past. Sledge ends up, indeed, as a kind of American Candide, a man who in his grand past suffered in his innocent pride, but who wisely turns to tending his own garden.
I squirm, however, when I think of Sledge basically sacrificing his musical talents and the appreciation that goes with them for the kind of nostalgically evoked America Hoote rewards him with. Although Australian-born Beresford, like the Germans Wim Wenders and Percy Aldon would do in the years following, poetically depicts the American southwest, it is hard for me to see the barren flats around Palmer and Waxahachie, Texas, where the film was shot, as representing a kind of new Eden. And, although, Rosa Lee's house seems to improve in appearance with every scene, it is still a grubby, unpainted shack in the middle of nowhere. While I know many thousands of viewers will cry their eyes out (I admit it, so did I) at the very thought of father-and-son bonding in football heaven, I find it a long way from anything I might describe as my American dream. In order regain his peace of mind, I would argue, Sledge has had to give up nearly everything, including—the near impossible for a song writer—language itself. Rosa Lee's quiet smile at the end of Tender Mercies sends a shiver through my bones, for in order to survive in her world, Sledge has had to abandon the messiness of a creatively meaningful life.
Los Angeles, March 17, 2009
Posted by greenintegerblog at 7:32 AM