Reclaiming the Past (on Eleanor Antin's Historical Takes) 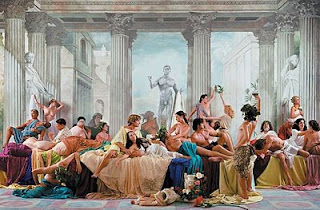 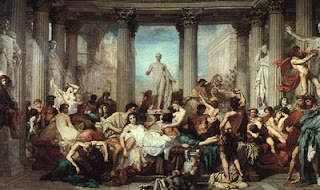 Thomas Couture, "Romans of the Decadence"

As the Foreword to Eleanor Antin's catalogue for the show Historical Takes observes Antin's work has long involved photography. One of earliest pieces, Carving: A Traditional Sculpture of 1972, presented photos of Antin herself, nude portraits shot from front, back and side, as she underwent a diet, losing several pounds of weight. Her famous postcard series 100 Boots portrayed the boots in various American landscapes as they traveled across the country. A great part of her various impersonations of the Ballerina, moreover, depended on photographic representation of Eleanora Antinova and the various roles she had performed. The series Angel of Mercy consisted entirely of photographs, made to look like gelatin silver prints of the 1850s of a kind of Florence Nightingale-like figure involved in the Crimean War.

None of this, however, led us to expect the size and grandeur of her newest series of photographs, The Last Days of Pompeii, Roman Allegories, and Helen's Odyssey, some of which are nearly 50 x 60 inches in size! These grand portrayals of Roman and Greek life, moreover, are almost baroque in their lustrous detail of these worlds of the imagined past.
Antin's notion of the past however, as we know from her other works, is never a simple representation—not even a representation of art—although her works in this show do reference famous art works such as Oscar Gustav Rejlander's The Two Ways of Life, Lawrence Alma-Tadema's The Roses of Heliogalus, Nicolas Poussin's The Triumph of Pan, and Thomas Couture's The Romans of the Decadence. Even when directly quoting from the original, as in the Couture painting, which Antin titles "Plaisir d'amour (after Couture)," there are important and illuminating differences between the two. The bodies of Couture's bacchants are more fully clothed and their various groupings of individuals, melodramatically playing out themes of drunkenness, voyeurism, exhibitionism and just plain lust, seem far more "staged" than Antin's tableau vivant photograph. Perhaps because Antin's work captures images of real human beings in the same acts, there is something more fleshy—and even in our porn-sated times—more literally "shocking" than the original painting. The numerous beautiful bodies portrayed in Antin's photograph engaged in various heterosexual couplings, and gay and lesbian friezes appear far more lustily engaged in the contemporary work than in Couture's emblems of decadence. By cropping the original at the edges, moreover, Antin has centered our attention on the fleshy appetites of these sexy beings, drawing our attention even more to the center-right male, directly behind the Pan-like figure toasting the whole affair, who in the original painting seems to be pondering his navel in a Narcissus-like reverie; in Antin's work this muscle-sculpted male seems gazing off into nowhere, as if he were simply distracted in thought or even bored with the whole thing. Accordingly, the photograph "after Couture" carries with it a kind of cinematic quality, as if Cecile B. DeMille had decided to bring the vices of Roman life to the screen. The central figure's apparent ennui concerning the proceedings, accordingly, brings with it an element of irony and even humor completely absent from the 1847 canvas.
In numerous other works, by combining anachronistic elements, purposely playing with viewer expectations, and creating absurd narrative situations, Antin forces us again and again to compare the past of other generations with the visions of the past of our own time. Neither, we recognize, is a "true" vision of reality, even if such a vision were possible, but by overlying these different sets of realities, the artist often poses profound questions for our time. Who, for example, are "the lovers" in her photograph titled by that name. Are the man and woman standing among the ruins "the lovers," or the young girl biting an apple (a young Eve) and the man? The man, smoking a cigarette as he leans against an ancient pillar, seems more bored than interested in sex. Or perhaps he is pondering his love of art in the form of the stone goddess before him. Or are the lovers the robed couple, holding hands (apparently both men), trotting off into the woods? In this love among the ruins, no one answer is sufficient.
Similarly, who are the players of Antin's "The Comic Performance." Obviously the half naked old man at the center the work, being prodded in the ass with a long stick by a jester-like figure is a fool. But so too he who prods, as is the man at left, grabbing an equally foolish being by the leg as if to drag him off. The various spectators on either side of the central action, all nearly doubled over with laughter seem as foolish as the others, as are the secret lovers in the background.

In "All for Love," part of the Helen's Odyssey series, poor little cupid, his arrows crossed, is pulled in two directions by the admiring women entrapped in a guilt-encrusted room. This piqued little Cupid is frozen in the opposing pulls of his own admirers.
Antin also, of course, transforms her "imitations" of the past into comic narratives of contemporary feminism. In the two versions of "Judgment of Paris (after Ruebens)"—one presenting a "Dark Helen," the other a "Light Helen," since the "casting" director obviously could not make a decision—reminds us of the other contestants, Athena, Aphrodite and Hera, the first the beautiful warrior, the second, the elegantly dressed beauty Aphrodite, and the third, the jealous wife of Zeus, here portrayed in a kind of I Love Lucy costume, vacuum cleaner at her side. What Antin's work clearly suggests through these different manifestations of beauty is how the modern woman is asked in encapsulate all of these qualities to survive in contemporary society. The poor Helens, light and dark, seated upon their trunks, seem painfully awaiting an outcome that, as Antin herself has described it, with inevitably "suck":

She isn't free to run away, the trunk would be too heavy,
she doesn't have a warm coat, and anyway, be real, where
would she go? My Helens are reasonable; it's the world
around them that's crazy.

In one of my favorites, "Going Home," Antin presents us with six figures, five of them seemingly walking into the ocean with raised umbrellas. Are they returning home via death by drowning or are they each beginning a voyage like Odysseus which will take years to complete? And do they expect the fragile Magritte-like umbrellas they hold to protect them from the waters they must face? The final figure, a young girl, sits, also with raised umbrella, on a suitcase, facing the other direction. Is she staying or returning? The images reveal no answer and call up an absurd Felliniesque world whose only clues, perhaps, are the strewn objects along the beach.
In each of the works Antin seems less interested in representing the past (as true tableaux vivant generally attempts) than in "reclaiming" it, remaking it through the lens of our own time into something which restores meaning to what otherwise can have no real significance in our lives. As with the Ballerina and other figures of her imagination, each time Eleanor Antin attempts to envision a slightly different solution to history than the one represented in the history books or even great art works of the past. While we may often be doomed to stupidly repeat the past, Antin suggests, we are not necessarily bound by it. By asking ourselves the questions her works evoke, we can perhaps redeem that dead world through transforming our own.