Three by Horton Foote (introduction to three essays below) 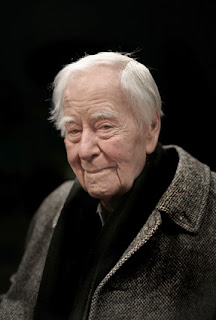 As I mention below, the death of Horton Foote on March 4th, 2009 sent me back to three screenplays he had written: To Kill a Mockingbird, based on a novel by Harper Lee, The Trip to Bountiful , and Tender Mercies, the latter two emanating from his own pen.
Foote is the kind of man who, as one of my favorite film guides, Time Out, describes him, is seen as "admirable." Harper Lee reportedly said of his face something to the effect: "He looks the way God should, only he's clean shaven." The films I selected to write about are immensely popular, most of them winning awards, two of them being mentioned recently in The Los Angeles Times in their list of 10 best "Comfort Films," films they claim to be as appealing in our economically hard times as comfort food.
Finally, I had enjoyed all three films on which I chosen to write, having seen the first two of them several times.
How to explain, then, the essays that follow, in which I basically dismiss them for representing the status quo or, at least, a diminishment of life? Chalk it up, perhaps, to my curmudgeonly shift into older age. Or, perhaps, as I have aged I simply do not have as simple-minded notions about life and happiness as I did in my youth.
As I wrote early on in this series of My Year volumes: "I seek no agreement with what I put forth and often have skewered my perceptions of things in order to explore issues that most interest me."
Looking at that kindly face—he does sort of look like a god, if you believe in a white god—I am sure that Horton Foote was admirable, kind even, caring, loving, well meaning. But I still don't think I could live a world created by him.
Posted by greenintegerblog at 7:57 AM