20 Days in the City of Angels: The 14th Day (All Shook Up) [on the Northridge Earthquake] 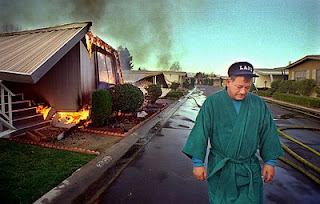 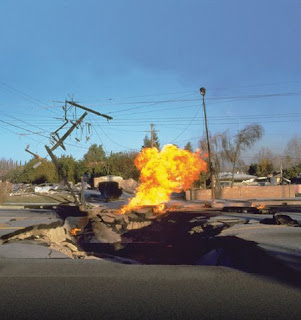 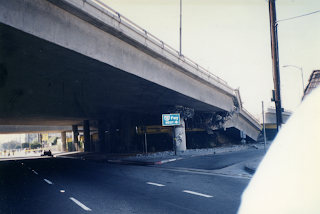 On Sunday, January 16, 1994, Howard and I traveled by car to Orange County to see a show at the Newport Harbor Art Museum. Neither of us can recall what show we saw, but on our way back, I felt uneasy, for the first time, about driving beneath the vast interchanges of highways through which we had to pass.
That evening I inexplicably asked Howard as we lay in bed, "Do you know where your clothes are?"
He looked at me quizzically. "What do you mean by that?"
"In case there's an earthquake," I found myself saying. What had I meant? I hadn't been thinking of anything in particular; the words had simply slipped from of my mouth.

At 4:31 AM, our bed began shaking, and, as we ran into the living room with clothes in hand, the large roar* and shaking of what we knew was a serious earthquake continued. As I tried to step into my pants, I fell to the floor, startled by the fact that the shaking was continuing much longer than any temblor we had previously experienced. The quake lasted for about 20 seconds.
"Was that the big one?" I asked.
"Big enough," Howard responded.
We finished our dressing and took up a flashlight to inspect any damage. A large bookcase in our den had fallen across the desk, sending the computer to the floor, but little else was in disarray. We decided to check out my office, located two blocks away.
As we exited the front door of our building, however, a strange gathering had taken place. Several individuals stood on the terrace outside, looking out in one direction, as if there was something to see there. Everyone whispered, many hardly daring to speak. It looked like a frieze out of some disaster film: the silhouettes of these fearful people, some of them dressed only in bathrobes, eerily reminded me that people sometimes do imitate art.
Meanwhile, we could see a few men trying to pull back the gateway to our parking lot, locked because of the power failure. Howard and I helped them to pull it open part way, and a few cars drove off into the semi-dark.
At my office, only a few books had fallen to the floor, and I left them where they lay. Howard determined that we must go to the Los Angeles County Museum of Art, across the street, where he worked. The guards let us in, and another curator who'd immediately driven to the museum, led us through Ahmanson Building, where much of the ceiling had fallen to the floor. A large ancient Buddha lay in fragments, with a few specialists inspecting at the results. We were led on to what is now known as the Art of the Americas Building, where the modern and contemporary art collections were shown.
With a conservator in hand, Howard and I separately toured the several rooms on each floor, observing and calling out news of any fallen or destroyed objects. In one gallery, all of the small, beautiful sculptures of Degas's ballerinas had fallen to the floor. At the top of the stairs, the huge Anselm Kiefer sculpture, Das Buch (The Book), although held against the wall with hidden rope, had turned nearly 180◦. A few glassworks were shattered, but, all in all, the collection had primarily survived.
It was a painful experience, nonetheless, to access all of the damage that had been done.

The earthquake was not the big one, but, nevertheless, was the largest ever recorded by instruments in an urban area of North America. Centered in Reseda and Northridge, areas of the San Fernando Valley, the 6.7 quake, as we gradually discovered throughout the day, had destroyed hundreds of fireplaces, numerous homes and buildings, and, most startlingly, several major underpasses—precisely what I had feared the day before.
A short walk around our neighborhood revealed dozens of brick fireplaces laying on the ground. And just south of us, the underpass of the Santa Monica highway (the 1-10 Freeway), had broken in two pieces and collapsed. That afternoon, we walked down to see it, with dozens of others joining us along the way.
Later that day the power returned, and through television we discovered that there had been fires in the Valley and that a parking garage had completely collapsed, killing several people. Part of the Northridge Fashion Center had been destroyed. Overall, about 72 people were killed in the quake and 6% of structures were determined unfit.
The next day, my senior editor, Diana Daves, who lives in the Valley, called to report that everything in their kitchen had crashed to the floor, and that part of their ceiling was now on the living room floor. Their daughter, Molly, had been terrified as she became trapped in her bedroom.
For weeks, the stories continued. But, I think the most horrifying thing about the earthquake was our knowledge that, beyond the 20 million dollars in damages from this quake (later called the Northridge Quake), we had still to face a much larger and more destructive one in the future.
A couple of days later, I stopped into our local coffee shop, the famed Johnnie's, a place now closed, but still used as a location in dozens of films. The waitresses always seemed to be from another time and place: "Hi, honey," said my favorite waitress. "Hower you? And where you been?"

*For those who have not experienced an earthquake, one of the most terrifying aspects of the event is the sound of everything shifting and twisting in space.
Posted by greenintegerblog at 10:13 AM