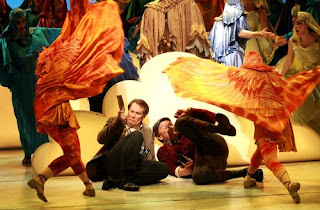 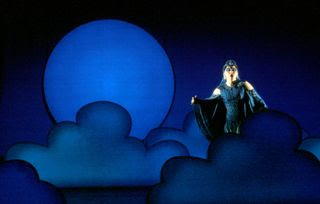 On April 11, 2009 my companion Howard and I attended the Los Angeles Opera premiere of composer Walter Braunfels's The Birds, a opera performed as part of their "Recovered Voices" series devoted to bringing attention to "lost operas," operas banned by the Nazis and neglected since.
Braunfels was certainly not the typical banned artist. Although part-Jewish, Braunfels had converted to Christianity after serving in World War I, an experience which transformed his view of life. The opera, begun before the War and finished after, premiered in Munich in 1920 and received at least 50 performances over the next few years. With its Wagnerian and Strauss-like harmonies, and its restatement of Germanic Romantic values, the opera, indeed, might have nicely served the Nazi cause had it not been that Braunfels was adamantly anti-fascist, refusing to write an anthem for Hitler. His music, accordingly, was labeled as "Degenerate" (Entartete Kunst), and he was removed from his position as co-director of the Hochschule für Musik Köln (the Cologne Academy of Music); Braunfels waited out World War II in Switzerland, returning to a post-War world in which his music appeared as old-fashioned and completely out of touch with its time.
Yet, as several music critics have observed, there is shimmering beauty to The Birds that creates a comforting sense of homage to Wagner and Strauss which easily enchants its audiences. Based loosely on Aristophanes's hilarious satire of Athenian society, Braunfels's version follows the journey of Good Hope and Loyal Friend to visit the head of the birds, Hoopoe, paralleling Pisthe-tairos's sudden inspiration—stimulated, in part, by his fear that he and his friend will be killed by the skeptical avians—that the birds regain their rightful place as rulers of the heavens by rising up against the gods and building a heavenly walled city in the sky. As in Aristophanes's play, Cloudcukooland is built and the birds, delighted with their success, award Pisthetairos (Braunfels's Loyal Friend) with their friendship and wings.
In Aristophanes's work, however, the building of the great city brings on a plague of visitors, each satirizing an aspect of Athenian society; Good Hope in the ancient version of the play is all but lost as Pisthetairos, one by one, mocks and wittily dismisses his "enemies," and, even outfoxing Zeus, marries the figure who translator William Arrowsmith describes as "Miss Universe."
From the evidence of his Act I, Braunfels may have originally intended to more closely follow Aristophanes, but Act II of his opera diverts the focus of the work away from Loyal Friend's grand schemes by having Good Hope fall in love with the song and being of the Nightingale, resulting in one of the most memorable of the opera's duets between tenor Brandon Jovanovich and soprano Désirée Rancatore. He further imbues Cloudcukooland with Utopian possibilities by adding a marriage ceremony and dance between Miss Dove and Mr. Pigeon (Yvette Tucker and Seth Belliston).
Omitting the series of visiting troublemakers to Cloudcukooland, Braunfels focuses instead on the mythic possibilities of the bird kingdom and the birds' hubris in attempting to rise up against the gods. Whereas Aristophanes's Prometheus comes to Cloudcukooland to warn his human friend, Pisthetairos, suggesting how he might outwit Zeus, Braunfels's Prometheus (brilliantly sung by Brian Mulligan) is more like Strauss's John the Baptist, a prophet crying in the wilderness.
The terrifying storm of lightning Zeus reigns down upon the upstart kingdom, reduces the birds and humans involved to the twittering, fearful creatures they had been at the beginning of the work. The Utopian world sought by Good Hope and Loyal Friend has been destroyed, perhaps Braunfels's presentiment that the Weimar Republic would not survive. Certainly he would not be the first German-language writer to predict the dangers that lay ahead; two years after the premiere of The Birds, Austrian writer Joseph Roth wrote a scathingly realistic portrait of the conspiracies of the radical right in his novel, The Spider's Web.
Yet Braunfels's work, with Good Hope's final insistence that his encounter with nature has changed him, healed him perhaps, an experience that will remain with him forever, merely reiterates the Germanic Romanticism that lay behind so much of the Nazi ideals. And in that sense, the dream of a militaristically-determined city-state, as presented in Braunfels's conception, may be a likely desire of another generation.