Why the Hell Did You Come? (on the composer Harry Partch) 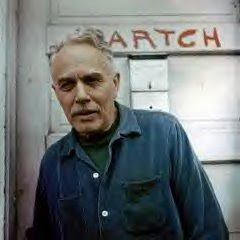 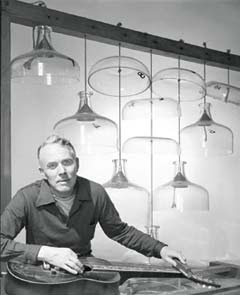 Harry Partch Partch Dark, Partch Light, performed by the group Partch at Redcat (Roy and Edna Disney/CalArts Theater) in the Walt Disney Concert Hall on May 29, 2009

A true American musical maverick similar in some respects to Charles Ives, composer Harry Partch was born, the son of Presbyterian missionaries, in Oakland, California in June 1901. Much of his youth was spent in isolated Arizona and New Mexico towns, where, reportedly, he heard and sang songs in Spanish, several American Indian languages, and Mandarin, sung to him by his mother, who had spent time in China.
He attended the University of Southern California in Los Angeles with the intention of a musical career; but in 1925 he discovered the book On the Sensations of Tone by the German physician and physicist Hermann Helmholtz, a study of the psychological effects of musical tones, and soon after dropped out of school to study by himself, exploring the musicality of speech and constructing his own instruments that "underscored the intoning voice." As Partch wrote:

I came to the realization that the spoken word was the distinctive expression my
constitutional makeup was best fitted for, and that I needed other scales and other
instruments. this was the positive result of self-examination—call it intuitive,
for it was not the result of any intellectual desire to pick up lost or obscure
historical threads. for better or for worse, it was an emotional decision.

His first instrument was the "Monotone," an "adapted viola," which later joined with numerous others including The Diamond Marimba, The Quadrangularis Reversum, the 11-key Bass Marimba, Bamboo Marimbas (nicknamed "Boo" and "Boo II"), Cloud Chamber Bowls, an instrument he called "The Spoils of War" (which included Cloud Chamber Bowls, artillery shell casings, metal whang-guns, and wooden piecings), The Gourd Tree and Cone Gongs, an xylophone augmented with tuned liquor bottles and hubcaps (The Zymo-Xyl), Kitharas, and Harmonic Canons (played with fingers, picks or mallets).
Receiving a Carnegie grant in the early 1930s, Partch traveled to London, meeting the great Irish poet William Butler Yeats, who game him permission to set his translation of Sophocles' Oedipus as an opera. Transcribing the inflections of the Abbey Theatre actors, Partch performed his piece on Monophone, intoning "By the Rivers of Babylon." Yeats was delighted by the effects.
Yet the grant soon ran out, and the following year, 1935, Partch returned to the US at the height of the Great Depression, and lived for nine years wandering as a hobo, doing odd jobs and designing his instruments.
Important works of this period were "Dark Brother," performed at the concert I saw by the Partch group, a piece from Thomas Wolfe's "God's Lonely Man," which reiterates Partch's own sense of isolation and separateness. Most of Partch's relationships were with males, and his feelings of disengagement with the whole of society were obviously intense.
Yet many of the works of this period are brilliantly comical, including the "Yankee Doodle Fantasy," sung in accompaniment with tin oboes and other instruments, that satirizes patriotism, serious club women, and even his 43-tone note system. Similarly lighter Partch pieces, two based on James Joyce's Finnegan's Wake, "Isobel" of 1944 and "Annah the Allmaziful" of the same year, were, along with his utterly charming tribute to Lewis Carroll's "Jabberwocky," ("O Frabjous Day!"), highlights of the evening.
One of Partch's most strange but yet arresting works is his "Barstow: Eight Hitchhiker Inscriptions," based on messages left by hitchhikers just outside the Mojave Desert junction of Barstow:

The scribbling is in pencil. It is on one of the white highway railings just outside
the Mojave Desert junction of Barstow, California. I am walking along the highway
and sit down on the railing to rest.
Idly I notice the scratches where I happen to drop. I have seen many hitchhiker's
writings. they are usually just names and addresses—there are literally millions of them,
or meaningless obscenities, on the highway signs, railings, walls.
But this—why, it's music. It's both weak and strong, like unedited human
expressions always are. It's eloquent in what it fails to express in words. And it's
epic. Definitely, it is music....
Indeed, upon first hearing each of these numbered pieces, presented in a kind of sprechstimme-like performance by guitarist John Schneider, the words are almost laughable. But Patrch allows us after the original statement to hear the echoes of those words, by repeating them with emotionally-charged aftertones and dramatic additions ("ha-ha-ha," "dum-de-dum," etc) that transforms them into haunting expressions of fear and joy. The first one, for example, begins with a young man returning to Boston, Massachusetts, wishing he were dead, yet oddly adding "Today I am a Man." Is his manhood defined by his desire for death or for some sexual encounter that he has recently had? There is no one answer; but the echo of the two, filled in by Partch's joyful exclamations, alter the whole, and suddenly what might have been simple banality is awash with glorious possibilities.
Similarly, the young girl of "Considered Pretty," whose name and Las Vegas address appears merely to be a sexual invitation, is transformed by the final statement: "objective matrimony," while the sly admission that she is "considered pretty," pulls at our hearts when connected with her obvious desires.
"Jesus Was God in the Flesh" begins as a simple announcement of belief, repeated over and over like a prayerful charm song instead a statement of faith. "You Lucky Woman" recounts the self-described charms of a passing man, whose braggadocio might be completely disgusting were it not for his final challenge to the opposite sex that "all you have to do is find me." And the final piece "Why in Hell Did You Come?" is shouted out almost in irritation for those hitchhiking complaints of the writer and others suffering the itinerant life. Yet in that ironic cry we hear the numerous echoes of drifters catalogued by John Steinbeck, Woody Guthrie, and others.
The evening began with Eleven Intrusions of 1950, written while Partch was staying in Gualala, on California's northern coast, at a ranch owned by pianist Gunnar Johansen. There, among the redwoods, Partch created many of his instruments and worked in relative splendor in comparison to his earlier days. But the isolation apparently became oppressive, and the darkness of these Japanese-inspired works, almost haiku-like studies—each piece generally performed by two instruments that present a sequence of microtonal dissonances—of a rose, a crane, a waterfall, the wind, the street, the lover, soldiers, and other concerns reveal the darkness of a life that formerly seemed to be able to survive great depredations.
This was, I am sorry to say, my first encounter with the music of Harry Partch, a man who, as I described in an earlier essay, was rescued later in his life by my friend Betty Freeman. It will not, however, be my last Partch concert. And the day after this event I listened with wonderment to Partch's "Two Studies on Ancient Greek Scales" and, again, to "Barstow" on the record Just West Coast with great pleasure.