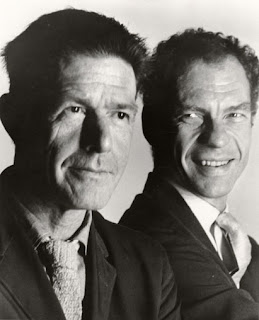 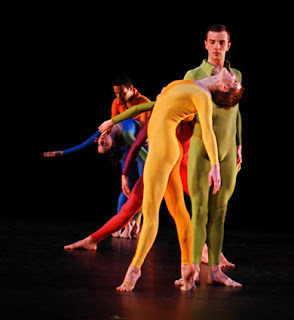 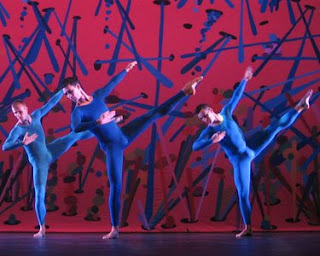 In memory of Merce Cunningham

In her beautifully written and revelatory autobiographical study of the American composer and poet John Cage and the dancer Merce Cunningham, Carolyn Brown recounts the first time she saw Cunningham dance, in a Master’s Class in Denver in April 1951:

He was slender and tall, with a long spine, long neck, and sloping shoulders; a
bit pigeon-breasted. The body was a blue-period Picasso saltimbanque though the
face and head were not. I remember Merce most clearly demonstrating a fall that
began with him rising onto three-quarter point in parallel position, swiftly
arching back like a bow as he raised his left arm overhead and sinking quietly to
the floor on he left hand, curving his body over his knees, rolling over quickly
arriving on his feet again in parallel position—all done with such speed and
elegance, suppressed passion and catlike stealth that my imitative dancer’s mind
was caught short. I could not repeat it. I could only marvel at what I hadn’t
really seen. His dancing was airborne then; critics and audiences of that time still
cannot forget his extraordinary gift for jumping. …Merce Cunningham had an
appetite for dancing that seemed to me then, as it does today, to be his sole
reason for living.

Brown had been brought up on dancing, studying with her mother Marion Stevens Rice, a member of the Denishawn school of Ted Shawn and Ruth St. Denis. Throughout her childhood she had attended dance events in Boston. “Despite that exposure,” she nearly gushes, “I’d never seen anyone move like Merce; he was a strange, disturbing mixture of Greek god, panther, and madman.”
Seeing Cunningham dance, however, was not enough for her and her husband, composer Earle Brown, to pack up and move to New York. Carolyn had no intention of becoming a dancer! It was Cage, with whom she and her husband intensely talked over two nights of parties in Denver, who would truly influence their decision to move to New York. Although they had intended to go to Los Angeles so that Earle could privately study with Arnold Schoenberg, the great composer’s death in July 1951, along with a remarkable concert in their own living room by the young pianist David Tudor, as well as their earlier conversations with Cage determined their move East.
Greeted in their new environment again by Cage, with his “well-documented remarkable open-mouthed half-chuckle/half-laugh that exposed a large fleshy tongue lolling on lower teeth,” the couple was quickly swept up into a concatenation of artists, dancers, composers and writers—Morton Feldman, Christian Wolff Jasper Johns, Robert Rauschenberg, Ray Johnson, Paul Taylor, and hundreds of other luminaries as they moved from lower Manhattan, to Black Mountain College—where in 1953 Cunningham first formed his dance company—through hundreds of American small towns, and eventually to Europe, Asia, and South America.
Along the way, the reader becomes privy to the hundreds of friend-ships, working mates, lovers, and acquaintances (Brown intimates the reasons for the break up of the Cage-Cunningham deep friendship with Rauschenberg, and hints at the dissolution of her own marriage). By the end of this long work, one feels almost as if he has read a panoramic novel, like War and Peace, instead of straight-forward autobiographical biography! Certainly, by the work’s last words, with the former Greek God-panther-madman sitting, wracked with pain in a wheel-chair—we feel not only that we have seen every important dance that Cunningham choreographed, but that we know these two great men.
For all of her devotion to and love of Cunningham, Brown reveals that of the famed duo, Cunningham was the difficult one, a man often lost within himself, at times almost reclusive, failing to explain his decisions—including the seemingly impulsive decision to dismiss the popular Remy Charlip from his company—or even to relate the logic behind or names of the works he created. Brown survived Cunningham’s company for so long, it appears, because of her great sense of independence, her ability to accept her mentor’s silences, and her devotion to her art and to the idea of Cunningham’s greatness.
Cage, on the other hand, comes across as a generous spirit throughout, a man who loved games, eating (his mushroom-hunting expeditions are renowned), and, most of all, talking. The gregarious Cage, traveling in the early days with the company, was responsible, so Brown suggests, for the feeling that they were, in fact, a company, for the sense of group spirit. Like a loving mother, Cage is always there to help Cunningham get through the ordeals of travel and the horrible pain the body of any dancer must endure.
Cage is presented as a joyful being, seeking everyone’s happiness. Brown writes:

For many years we seemed to be operating in the world, not in a world
apart. There was a richness and variety of experience. …John had friends
from coast to coast and was always making new ones. And if there was a
really fine museum, or notable architecture, or maybe just a good movie
around, John would find time to get us there. Slow scenic routes were
chosen instead of mind-numbing thruways. “Have you seen Niagara Falls?”
John would ask…. Our existence then was governed by process, not product.
The means and the end justified each other. Despite the fact that getting
there (traveling) seemed to take precedence over being there (performing),
and what and where we ate appeared to be far more important than any
single performance…our focus nevertheless was single: art-and-life. No
separation. John’s credo—accepting the multiplicity of things—was ac-
tively lived in the VW days. Later on, Merce’s credo—weeding out every-
thing but absolutely essential to putting on a performance—became the
company doctrine….

It was Cage who wrote to various venues throughout the world and arranged the world tours that Cunningham’s company would take. Cage, moreover, was responsible for raising money for many of Cunningham’s performances and travels. What is utterly fascinating in Brown’s remembrances is just how different this group of gay artists—Cage, Cunningham, Rauschenberg and Johns—were from the musical establishment as recounted in Sherry’s Gay Artists in Modern American Culture. At the same time that Copland, Menotti, and Barber—as well as the established dance company of Martha Graham—were being paid large amounts to present their works around the world, Cunningham’s company was turned down year after year for any governmental financial support. And grants came to Rauschenberg only after he received the Grand Prize at the Venice Biennale in 1964.
Cage’s open-mindedness was reflected, as well, in his commitment to chance operations. While Cunningham, on the other hand, attempted chance operations in several of his dance works, the actual performances were mostly pre-determined and were not altered in subsequent renditions. If the dances of the Cunningham company may seem to be the perfect blending of music, dance and art, Merce’s method of rehearsing his dancers without music, set, or costumes until the very last moment, seems to be at odds with the results.
Brown and other dancers make it clear they were not always in sync with the radical musical compositions by Cage, Wolff, Brown, and others that Cunningham employed. It is almost as if Merce and company were able to block out of their minds, at times, integral elements of the whole—although the critics commonly focused, in their attacks, on just those matters.
In the end, however, we come to perceive that the very greatness of Cunningham—and perhaps the brilliance of Cage’s music and thinking—had a good deal to do with the differences between these two men and, at times, the oppositions of their other collaborators. It seems to me that the beautiful black-and-white photographs upon this book’s cover express the essence of the Cage-Cunningham contributions to the whole artistic expression—a kind of perfect balance, between the arts, yes, but particularly between human beings.