20 Days in the City of Angels: The 19th Day (Interviewing the Inteviewer) 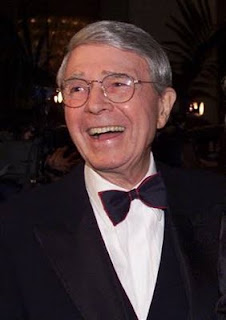 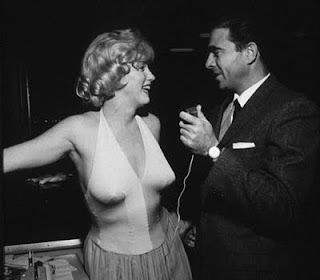 Army Archerd with Marilyn Monroe
The condominium in which I live lies directly across the street from a high rise building in which are currently located the offices of Variety, an entertainment daily magazine to which I do not subscribe, but which, as a child—on those rare occasions when I came across a copy in Marion, Iowa—utterly fascinated me since it was an entire newspaper devoted to theater, film, and other of my favorite cultural activities. Even today, I can't imagine who in my small city might have been subscribing to it and how I might have encountered copies, but—as any regular reader of the My Year volumes knows—stranger things have happened to me.
Recently I read of the death of one of Variety's most noted columnists, Armand "Army" Archerd, on September 8th of this year, and that, in turn reminded me of the February 7th, 2008 press opening of the Los Angeles County Museum of Art's new Broad Museum, when I had lunch with him. It was not a true interview, of either him or me, but an accidental seating arrangement of which I took advantage to introduce myself and to question him on his long career.
I had known a little about him, simply through celebrations in print of his life. Archerd replaced columnist Sheilah Graham (the noted girlfriend of F. Scott Fitzgerald) in 1953, and worked at Variety for the rest of his life, most notably covering Hollywood news and gossip in his "Just for Variety" column. Close acquaintances describe him as a handsome, always nattily dressed man; he was both on that the day I encountered him as well, although when I met him he had just recently reached the grand age of 86.
Unlike some gossip columnists, who cattily and often nastily seemed to spy on Hollywood performers, Archerd interviewed them, often reporting their own corrections to tabloid gossip and sharing information the stars themselves wanted to be made public. Accordingly, he was beloved by many in the Hollywood community, and was highly celebrated in a 40th anniversary event thrown for him by his own paper at the Beverly Hilton Hotel in 1993.
Among his hundreds of famous pithy observations was Hitchcock's comments in 1966:

He [Hitchcock] also regrets too many film writers today believe plot
is out of fashion. "Plot in a short story and a movie is the most
important thing. The motion picture is like a short story—it's the only
medium you expect to see in continuity without a break. You have to
consider the endurance of the human bladder."

or the wonderful quip from Cary Grant in his 1975 column:

Cary Grant has his attorneys investigating suits vs. People mag and Associated
Press, the former for printing he has false teeth. "I want to get into court
and open my mouth," said Grant. And the AP suit involves their quotes
from a Redbook yarn (which Grant claims doesn't exist), saying he never
loved any of his wives.

The "mystery malady" which laid low Marilyn Monroe is an allergy to
medication, she says. "At one time I was out cold," she admits. "Now
the only thing I'll take is aspirin." MM mystified guests at her cocktail
party launching "Let's Make Love," Friday, by showing up on time.

I asked him what he was presently working on, and he replied without an instant of thought: "A memoir."
"Wonderful," I responded. "It will have to include everyone! I'll read it."
"Except Greta Garbo. I never got to interview her," he admitted.
I briefly explained my work on my own "cultural" memoir, in which he seemed interested. I wish I'd been able to send him a volume or two.
I asked which piece of his reporting he felt had been his most important.
"Oh definitely, my piece on Rock Hudson announcing that he was sick with AIDS."
That 1985 item began:

The whispering campaign on Rock Hudson can—and should stop. He has
flown to Paris for further help. The Institute Pasteur has been very active
in research on Acquired Immune Deficiency Syndrome. Hudson's
dramatic weight loss was made evident to the national press last week
when he winged to Carmel to help longtime friend Doris Day launch
her new pet series. His illness was no secret to close Hollywood friends, but
its true nature was divulged to very, very few. He left for France and
possible aid from scientists there over the weekend. Doctors warn that
the dread disease (AIDS) is going to reach catastrophic proportions in all
communities if a cure is not soon found....

"Of course many Hollywood columnists had long hinted about Hudson's gay sexuality," I added. "I recall reading one such column in 1950s in which the writer warned that if a well known actor showed up once again on Santa Monica Boulevard, trying to pick-up a trick, there would be no way she could any longer hide his identity.
"I never did that kind of writing," he protested.
"I know. But Hudson was pretty obvious," I admitted. "I once saw him with Rod McKuen on an interview show with Dinah Shore. I guess they were doing some kind of record together. It was quite embarrassing, each of them almost swooning over the other, hardly able to keep their hands to themselves."
"Today, I think there would be way to cover up such behavior. But we—others and I—kept some respect for the stars' privacy. It was the only I knew how to write about the men and women on whom I depended for my career."
We ceased chatting and dug into Chef Joachim Splichal's delicious rib tips.