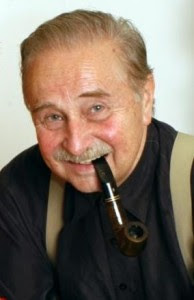 Sad today to hear of Serbian writer Milorad Pavic's death on Monday at the age of 80.
Pavic was the noted author of The Dictionary of the Khazars, a two volume fiction, and several other books.

Posted by greenintegerblog at 10:00 AM No comments:

Twenty Days in the City of Angels: The 15th Day (Sexual Liberation) 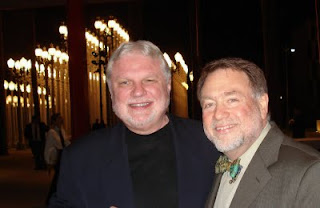 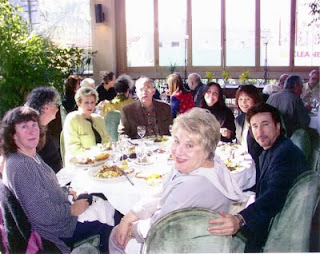 Some of the guests
As I have mentioned several times in these cultural memoirs, my companion Howard Fox and I have experienced disdain or mockery of our gay sexuality only once or twice in our years together. Throughout what will soon be a 40-year relationship, nearly all of our friends (and any enemies we might unknowingly have accumulated) completely accepted us as a couple.
Of course, as individuals immersed in various art worlds and living in a large city, that might be expected. But it appears to me that our relationship has not simply been "permitted" or graciously overlooked by our mostly heterosexual friends, but quite often embraced. Perhaps that has never been made more apparent than on February 6, 2000, two days after our 30th anniversary, by museum acquaintances Bea Cooper, Linda and Reese Polesky, and Barbara and Armin Sadoff, who brought together a large group, many from the Modern and Contemporary Council of the Los Angeles County Museum of Art at the Barefoot Bar and Grill in Los Angeles to celebrate the event.
Although I cannot be certain, I believe we were the only gay beings at that event. Yet the friendship of our various acquaintances—which included Museum trustee Michael G. Smooke and his wife Terri, curators Carol Eliel and her lawyer-husband Tom Muller, Mary Levkoff (now curator of European Sculpture at the National Gallery) and Stephanie Barron, artists Sandy and Ed Martin, collectors Linda and Jerry Janger, our close friend Roz Leader, and numerous other council members—could not have been made more apparent.
When asked to speak, Howard described me as his first—and last—"pick up." "There I was at the end of the 1960s without having participated in any of the sexual liberation of the age. I'd had a few relationships with both women and men, but had none of the open and free sex so seemingly available to everyone else. So one day, I decided to do something about that, and attended the first gay liberation meeting at the University of Wisconsin. There I saw this young blond boy, and when they asked for volunteers for a newsletter, he put up his hand. So I put up my hand. And we met afterwards, going out for a drink, and ending up in bed. But then it continued the next night and the night after that, and again the next night. By the end of the week Douglas had moved into my apartment. The first evening we were apart was more than a year later, when he was visiting my parents in Baltimore! So much for sexual liberation!"
I described Howard as my first "relationship," although, as I have noted elsewhere [see My Year 2005], I did have a short-lived affair with a young man in New York. "I had only had one-night stands," I proclaimed, "and I wasn't particularly seeking to change that. But then Howard raised his hand, and we had to do something about this supposed collaboration. Although Howard later did publically speak on a panel with several others involved in gay politics, I don't believe we ever went to a meeting again. And we never did produce that newsletter! Maybe they're still waiting for it."
The group of mostly elderly men and women, many the ages of our parents, heartily laughed.
Strangely, no gay friends ever feted us so brilliantly. But then, we have fewer gay friends, never having felt the need to separate ourselves from any group of individuals we met.
Perhaps Howard and I had experienced a kind of true liberation at that 1970 Wisconsin meeting, one that transcended even sex.

Emptying the Past (on Alain Resnais' film Muriel) 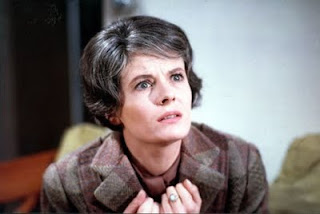 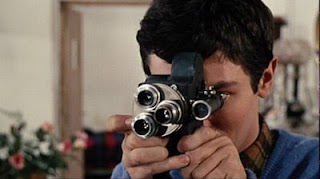 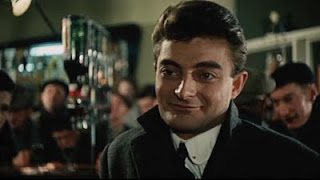 Resnais' films, for the most part, concern memory and the relationship between the past and the present, and Muriel is one of the best examples of his art.
Hélène (Delphine Seyrig), an antique dealer who uses her own Boulogne-sur-Mer apartment as her showroom, lives with her stepson, Bernard (Jean-Baptiste Thiérrée). Both have had troubled pasts: Hélène survived the war, but lost, apparently, almost everything else. Bernard, who served in Algeria, is troubled my events of that war, including the torturing of a young Algerian girl, Muriel, in which he passively participated; the girl was eventually murdered by other members of his platoon, led by Robert, who has also returned to Boulogne-sur-Mer.

She closed her eyes and vomited...Robert backed away. I left them. I
came back to see her that night, raised the cover...Like she'd been long
in water...a ripped-open sack of potatoes...blood all over her, in her hair...
burns on her breasts...Her eyes were not shut...I didn't feel much, nothing
at all perhaps. I went to bed...slept well. Next day before Reveille....

Into this troubled family comes Alphonse Noyard, an former lover of Hélène's, a man with whom she is still in love. Throughout the film they subtly blame each other for the failure of the relationship which might have ended in marriage while feebly attempting to rekindle their feelings for one another. With Alphonse comes Françoise, portraying herself as his niece, but who, in fact, is Alphonse's lover.
On the surface the reunion of this couple and the intervention into Bernard's life by the attractive Françoise, reminds one of a soap-opera, and Resnais, particularly in the first scenes, when he briefly freezes the frame of these characters' faces revealing their inner turmoil as opposed to the patter of their ordinary conversation, there is something almost melodramatic about their interactions; indeed the director further extends that feeling to the film by using pieces from an opera by composer Hans Werner Henze as the film's score. This intensifies the film's highly artificed sensibility, which along with its long tracking shots and quick cuts between faces and body parts not only contributes to the characters' sense of isolation but helps to reiterate their fragile mental states.
Throughout the film, the central figures attempt to present a sense of normalcy, but nothing about their interrelationships is ordinary. Hélène rushes to the train station to meet Alphonse, only to find the station empty; even as she invites Alphonse and Françoise to make themselves at home in her apartment, we discover that nearly all of the abode's contents are for sale, and she quickly leaves her two guests for a date with her friend Roland, an opportunity for her to gamble at the local casino.
Bernard greets the two guests with a sullen quietude and silly child-like actions such as pulling out a scorpion he keeps in a matchbox, all of which ends, strangely enough, with Françoise and him running off into the night, he, in turn, leaving her to her own devices in a strange city.
In Resnais' landscape day suddenly turns into night, characters we have never met briefly intrude upon the scene, and dialogue emanates from voices off screen.
Slowly, however, through the character's pretended sociability, their sudden accusations, and self-justifications, we begin to piece together these people's lives. The relationship between Hélène and Alphonse, we discover, was not as loving as both of them would like to remember, and may have resulted (suggested in the penultimate scene in the movie) in a unwanted child, which may also explain Hélène's desperate attempts throughout to raise cash, both through loans and gambling. Alphonse has come to Boulogne, in part, to escape his wife Simone and the failure of his restaurant; by film's end, his brother-in-law comes to fetch him before he escapes once again.
The relationship between Bernard and Robert, the story hints, may represent more a kind of unspoken love story that a tale of anger and hate for the murder of the Algerian girl. Certainly there is a more powerful relationship between the two men than between Bernard and his girlfriend, Marie-Do or another possible suitor, Françoise. Late in the film Bernard reveals the deep bond between him and his stepmother. Bernard shoots Robert, accordingly, not only out of revenge for Robert's war crimes and his current right-wing activities, but perhaps as much for a more personal betrayal of love.
There is no way, in short, to return. The past cannot be recaptured or bottled up. Like the local building Roland describes that everyone in Boulogne is waiting to fall from its cliff, the past will ultimately crumble, destroying those entrapped within its confines.
The very last scene of Resnais' great film captures Simone, Alphonse's wife, having come to Boulogne to find him. She opens the door to Hélène's antique world to find it completely empty.