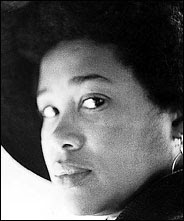 I recently reread Fran Ross's wonderful satire, Oreo, and enjoyed it even more than my original encounter. I first heard about this title at the Page Mothers Conference at the University of California, San Diego, in March of 1999, organized by Fanny Howe and Rae Armantrout. There Harryette Mullen spoke of the book which she had accidently come upon, noting, as she does in the Foreword to this new printing, that the work failed to "find its audience,"

possibly because in the process of commingling two ghettoized
vernaculars, African American and Yiddish, the novel also draws
on material that both black and Jewish readers might find of-
fensive, perplexing, or incomprehensible. Ross's double-edged
satire includes a Jewish immigrant who retains a voodoo con-
sultant Dr. Macumba; a reverse-discrimination tale of an all-
black suburb where a local ordinance is selectively enforced to
keep to keep white people from moving into the neighborhood;
a black radio producer's script of an advertisement for Passover
TV dinners; ...and a fight in which Oreo beats a predatory pimp
to a pulp while wearing only a pair of sandals, a brassiere, and a
mezuzah.

Moreover, the stereotypes of racial jokes abound. "Dialects, bilingual and ethnic humor, inside jokes, neologisms, verbal quirks, and linguistic oddities" occur at regular intervals throughout the work. One might add that heroine's brother sings his communications in a private language, while her mother transforms her difficulties into algebraic formulas. The book is not only filled with formulas, recipes, lists, questionnaires and riddles, but it comically parallels the adventures of Theseus, his voyage to the underground, and his encounters with the Amazons, Phaedra, Hippolytus, Peretithous, Helen, and the Minotaur. Indeed Ross's work is not a novel, but a vast picaresque of the American landscape, with Athens transformed into New York.
It sounded like the perfect kind of book for Sun & Moon or Green Integer, and soon after, I found a copy of the original and devoured it; discovering the book's editor was listed in the New York telephone directory, I began the slower process of trying to obtain the rights; unknown to me, Harryette had already been in touch with Northeastern University Press, and before I was even able to make a formal offer, the book was published in their Library of Black Literature, an appropriate place.
I cannot believe, however, that Oreo has yet found a wide readership, ten years later. Ross' bawdy take on American life features a half Black, half Jewish heroine who like a comic-book character successfully overcomes thousands of obstacles—lack of money, prejudice and hatred, sexism and abuse, and just plain ignorance—that face her upon her voyage to discover her identity. Oreo's greatest defense is what she calls WIT (the Way of the Interstitial Thrust), on the surface of the story a kind of mix of jiu-jitsu, karate, kung-fun and numerous other body moves, but in the work's poetic truth, represents her ability to speak, parody, imitate, twist, mock, and translate almost any form of language she encounters. And it is this verbal wit that stands at the center of this book.
Indeed, Ross' jumps, splices, cuts, fissures, and all out leaps of language might remind one the slightly later experiments of "language" writing. Like that poetry, the reader has sometimes to make his or her own associations and choices of meaning in order to successfully maneuver Ross' pages. But the experience is always worth the trip:

Oreo on the subway

She was too preoccupied to observe noses, mouths, and shoes and award prizes.
She did overhear someone say impatiently, "No, no, Mondrian's the lines, the
boxes. Modigliani's the long necks."
And: "She a Jew's poker. Take care the sinnygoge fo' 'em on Sat'd'ys."
This gave her an idea whose ramifications she considered during the ride.
Distractedly, she doodled on her clue list. Her basic doodles were silhouettes
of men facing left and five-lobed leaves. Her subconscious view of her father as
a mystery man? A pointless, quinquefoliolate gesture to the Star of David? No.
Silhouettes and leaves were what she drew best. Next to her profiles and palmates,
she made a line of scythelike question marks. Next to that, she sketched an aerial
view of a cloverleaf highway, her gunmetal-gray divisions making a cloisonné of
the ground. Then with offhand but decisive sweeps, she crossed "Kicks,"
"Pretzel," "Fitting," "Down by the river," and "Temple" off her list.

This event occurs after Oreo has described her hilarious life in Philadelphia for half the book and gone off to find her father, bedding down for the night in Central Park near a family of dog food-eating midgets, and battling it out with a pissed-off pimp and his long-hung monster sex fiend, Kirk.
The list she refers to above are some of the clues her father has given her to find him, and in her quirky searches, she somewhat reminds one of a Paul Auster-like detective, settling on chance. Ultimately she encounters him briefly just before his accidental death (an accident which she and a dog precipitates); in that short meeting, moreover, she discovers he has left something for her, the clue of which is hidden in one of her father's books.
Daring fate, Oreo sneaks back into his house, pretending to be a caretaker for his current wife's children. There she discovers the clue, unravels it, and collects her heritage: her father's sperm kept in a nearby clinic.
Sperm? This woman of wit has used her abilities to speak in tongues not only to overcome obstacles but, like some amazon warrior, has been able to wrest reproduction from male dominance; by book's end, she is in control of the future, not only her own future but the possible future of others as she ponders whether to sell her inheritance to her bigoted Jewish grandfather or to destroy the stuff.
The chapter closes with her whispering to herself: Nemo me impune lacessit (No one attacks me with impunity). Like Theseus, Oreo has finally won her throne, becoming the King-Queen of her empire. Seldom have we witnessed such a powerful figure in American fiction, and none them has been as funny.

Wonderfully funny book. Supposedly they are looking to do a movie. Great article.