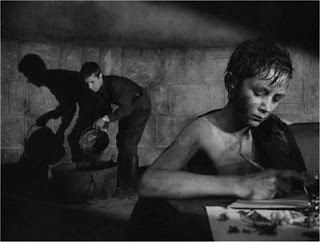 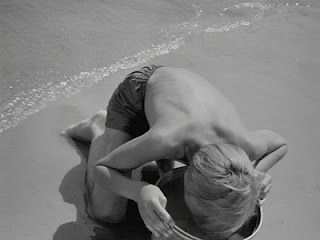 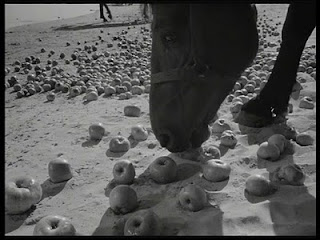 In one of the most astounding film directorial debuts since Orson Welles' Citizen Kane, Andrei Tarkovsky startled the cinematic world with his first feature film, Ivan's Childhood, which won the 1962 Golden Lion in the Venice Film Festival.
As critics have pointed out, in this film we can already see many of the elements of Tarkovsky's later works: a detailed attention to nature, long focuses on isolate elements of a scene which generate a feeling of abstraction, and scenarios suffused with visual images that generate emotional and psychological reactions drawing the viewer into the frame or—as Bazin might argue—pushing the film from the screen into the real world.
From the very first frame of this film we already recognize its young hero as a ghost, a figure of another time, who has lost his way (along with his soul and sanity) in a cruel world from which he can no longer escape. Only in his fleeting dreams, or brief pauses to catch his breath in his run from German territory, does Ivan (soulfully played by Nikolai Burlyayev) get any respite from the realities of war and hate.
One of the earliest flashbacks in a film that one might describe as one long flashback into a series of fragmented worlds, is a scene where Ivan and his mother stare down a well. The light emanating from the bottom, clearly the reflection of the sun, they concur, is a star at the bottom of the well. Despite the dark terror of the deep, for Ivan, whom we witness in the opening shot trekking through the swampy waters of the Dnepr, water represents a living force, almost his natural element. At several points in his memories, Ivan is seen drinking from a bucket borne by his mother. Regularly the child calmly endures pouring rainfall. When he is finally brought to Lt. Galtsev (Yevgeni Zharikov) by Russian soldiers, Ivan's face is almost a shrine to moisture, he himself having been transformed into something close to a star at the bottom of a well, a face shining through the water.
Galtsev is about to dismiss the urchin, but with a determined insolence, Ivan insists that he call Headquarters, Number 51, and report that he has arrived. The man at the other end of the line, Lt-Colonel Gryaznov (Nikolai Grinko) demands that Galtsev give the boy a pencil and paper so that he can make his report. Galtsev orders hot water, tells the boy to strip, and helps to bathe him. The child, refusing food, finishes his report, chews a few bits of bread and falls asleep. Galtsev carefully tucks a cover around the child. Within just a few minutes h e has clearly fallen in love with the waif.
Like Billy Budd, Ivan is outwardly a sign of beauty and innocence, naturally drawing people to him; within, however, and unlike Billy, he has become a machine of hate.
We soon discover how this monster was created: his mother and sister have been killed by the Germans, and Ivan, joining the partisans, saw his new friends trapped and murdered. He has also seen, so he declares, the Maly Trostenets extermination camp.
In opposition to these realities, presented mostly in Ivan's dreams, are paradiscal memories, a ride on the back of a truck filled with apples, which, falling to the beach are joyfully gobbled up by horses. His sister and others innocently play hide-and-seek; Ivan thrillingly races across the beach.
Gryaznov and others try to convince Ivan to attend a military school away from the line of action, but he refuses, threatening to return to the partisans, and Galtsev and his soldiers are forced to take on the care and strategic use of the child.
Planning a surprise bombing of the German camp, Captain Kholin, Lt. Galtsev, and Ivan slowly retrace Ivan's former path of escape, the men at one point leaving Ivan to go forward on his own, while they return, bringing with them two hanged bodies of their men as they pass.
Perhaps the worst thing about being at the front line is the intense silences. In the middle of the film, Kholin and the camp nurse, Masha, play out a game of sexual advancement and retreat within a frighteningly still beech woods, the very silence of that place hinting at the danger in their game. Now, the silence Kholin and Galtsev encounter as they quietly return to their bunkers represents the failure of Ivan's grenades to have exploded. Despite their denials, they know, and we suspect, Ivan has been caught.
The last scene of Tarkovsky's painful love letter to a lost past, takes place in Berlin at War's end. Together Galtsev and another of Ivan's former military friends peruse the scattered files of those caught and executed by the Germans. On the floor they miraculously discover Ivan's file, noting he has been hung. Like so many of Tarkovsky's heroes, Ivan is a victim of borders, being a child without a childhood, a man without manhood, an innocent filled with hate, a lovely being killed before he could come into full existence.