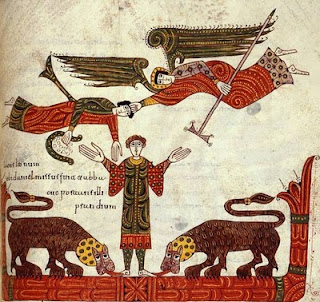 Anonymous The Festival Play of Daniel, James Conlon, conductor, Eli Villaneuva, director / performed by singers of the LA Opera, with members of the LA Opera orchestra, Hamilton High School Academy of Music Symphony Orchester, The Colbun String Orchestra, the Cathedral of Our Lady of the Angels Choir, the Colburn Children's Choir and Opera Workshop, the Pueri Cantores San Gabriel Valley Children's Choir, the St. John Eudes Children's and Adult Choirs / at the Cathedral of Our Lady of Angels, Saturday, February 27, 2010

The Old Testament Book of Daniel—which Howard and I reread before our attendance at the Medieval festival play based on it—is certainly one of the strangest books of the Bible. Although it contains three of the most famous stories of biblical literature—the burning and resurrection of Shadrach, Meshach and Abednego, Belshazzar's inability to read the writing on the wall, and Daniel's imprisonment in the lion's den—much of the story is a revelation-like maze of dreams, foretellings, and detailed interpretations of those dreams.
Daniel, a slave in the court of Nebuchadnezzar, quickly rises in the court when he is able to interpret Nebuchadnezzar's dream, even though the dream forebodes the end of his realm.
Similarly, he interprets the writing on the wall for Nebuchadnezzar's son Belshazzar, again predicting the fall of the empire, but is praised nonetheless for his ability.
The Persian Darius who next rules admires Daniel from the beginning, but is tricked by his advisors into commanding all men to bow before his image. When Daniel prays instead to his God, Darius has no choice but to arrest him and send him into certain death in the lion's den. When he opens the den the next morning to find Daniel has survived, he seemingly converts:

I make a decree, That in every dominion of my kingdom
men tremble and fear before the God of Daniel; for he is
the living God, and steadfast for ever, and his kingdom that
which shall not be destroyed, and his dominion shall be even
unto the end.

But these are the least complex of the that book's events. Much more perplex are the interweaving of dreams and tales, some told directly by Daniel, others by the kings. The texts quickly shift in form and content, one dream standing out almost as a surreal series of images that might be at home in any contemporary, animated science fiction flick.
At one point Daniel is visited by God or, perhaps, an angel, where he is told of a series of predictions that call to mind the New Testament Book of Revelations, ending in a vision of a figure similar to Christ. Even more strangely, after the vision occurs Daniel is ordered to "shut up the words and seal the book." In short, the prophet has been told to cease prophesying at the very moment of his greatest revelation.
The Christian-based Festival Play of Daniel concentrates its energy on Belshazzar, the inexplicable writing on the wall, Daniel's incarceration by Darius in the lion's den, and the prediction—much more emphatically stated than in the Bible—of the coming of Christ.
The production I saw was clearly revised and "filled in" with full choruses and orchestras, vast dances and a request for the audience to share in singing the closing song.

The Cathedral of Our Lady of Angels was filled with people of great racial and financial diversity (tickets were free), along with numerous children which were highly entertained by the long processions through the aisles of kings (Belshazzar, likeably played by Yohan Yi, and Darius by Robert MacNeil), queens (Danielle Walker), and an angel upon stilts (Caleb Barnes). The lions, for my taste, were too reminiscent of The Lion King, but obviously delighted the children in our midst.

I might wish to see this grand spectacle in a production performed closer to the original and directed more in the spirit of emblematic tableauxs rather than with such narrative flourish; Conlon's and Villanueva's production clearly served its purposes, bringing spiritual enlightenment to the audience through the more flowing and musically narrative passages. I admit that overall the production even brought tears to my eyes.
While the last phrase of the music (sung by audience and players) admitted that in God "we own the mystery," however, the many mysteries of Daniel were somehow painted over by this modernized recreation, and we left more in joy than in wonder.

Lighten up a bit, please. It was a grand and engrossing community event with surprisingly high musical and choreographic values. LAOp and the sponsors should be proud of themselves, and the creators need not be asked to apologize for making it entertaining too. I am eagerly looking forward to next year's event. If I need a psycho/spiritual exposition to the deepest meanings of the Book of Daniel in the meantime, I'll talk to my Priest or my Shrink. In the meantime, thanks again to the many people who made this delightful event possible.

Book of Daniel: I love chapter 3. Reminds me of Gertrude Stein's "Miss Furr and Miss Skeene."