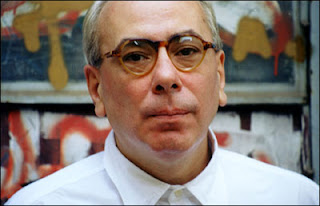 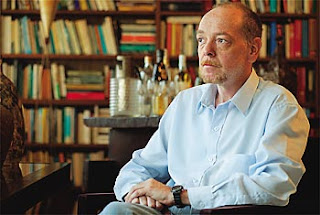 Nelson Ascher
On the second day of my first trip to São Paulo, Michael Palmer and I met with Régis Bonvicino for breakfast, and then walked a short ways to a coffee shop to meet the other editor of the book, Nelson Ascher.

Nelson—although a very different figure from our charming host, Régis—seemed affable enough. And as we began talking, we could see that he was warming to our company.

Of Hungarian background, Nelson was fascinated that I'd read some of the major Hungarian poets in translation, and as I shared my spotty knowledge with him, he filled in the gaps. Before long he was speaking of a great many things, with long disquisitions on all sorts of subjects, all quite coherently presented, but a bit like never-ending lectures that shifted quickly from theme to theme, and were, accordingly, almost impossible to follow.

As lunch approached, we ordered Antarctica beers and a bite to eat, but the conversation, mostly emanating from Nelson flowed forth, until I suddenly noticed the sun across the dark blue walls of the bar was beginning to set.

Both Michael and I were still suffering from jet-lag, and we were unable to take in much of Nelson said. At one point I recall Michael asking what Régis and Nelson felt were the most important books of Brazilian literature still needing to be translated into English. Régis quickly mentioned a couple of titles, but Nelson began a new lecture about the whole of Brazilian culture, a conversation that lasted long after I had any ability to coherently listen. We finally had to insist that it was time for us to go.

At first this free flow of information seemed almost comical, somewhat charming. But after the second day of the torrent of subjects pouring from Nelson's mouth, particularly when we were attempting to help our friends with the translations of our poems, his chatter became irritating. My explanation of a single English words would send him on discourse about several languages. That evening, after Nelson had left, Régis joked, "You see, Nelson is the Professor Everything. While I am the Professor of Nothing."

Some months later, when the two of them traveled to the United States to promote the book, those words grew to mean much more. If there had been an unspoken tension between the two editors in Brazil, by the time they reached the United States, Régis had begun to show signs of great impatience with his colleague. Nelson seemed quite oblivious, easily making friends with the American poets, because he spoke so openly—and so much; and he quickly won over friends such as Julian Semilian and my companion Howard simply because of his love of jokes. Régis seemed nervous and slightly tortured in his presence.

Indeed, when the two performed at a reading I had arranged in the Spanish and Portuguese Department of the University of California, Los Angeles, outsiders became aware of their growing enmity, and I had to step in as moderator simply to prevent it boiling over into the classroom. The Professor of Everything was slowly burying the Professor of Nothing in words.
I held a small party in my office that evening, and told both of them, staying at a nearby motel, that they had to be ready and waiting in the lobby by 7:00 the next morning so that we could catch the plane to San Francisco, the next leg of our travels.

At 7:00 I arrived at the motel, where Régis, as promised, stood ready. Nelson evidently was still asleep. I knocked on his door, awakening him and insisted that he had immediately to get dressed. We would miss the plane. As it turned out, he not even packed yet. And, as we nervously awaited him, Régis insisted we should leave him behind.

"You'll make the plane if we leave soon," Howard consoled us.

"We should just leave him. He'll find a way up," Régis persisted.

"But he doesn't even know the name of the hotel," I argued. "And I'm responsible for him as well."

Finally Nelson appeared and Howard rushed us to our plane.

It turned out that Nelson was desperately afraid of flying, and he postponed every moment he could before getting onto the aircraft. When we arrived at our seats, I insisted on sitting between the two to prevent any further arguments.

But out of fear, Nelson began to talk, and to talk, and to talk. He talked first of the Hungarian language, of the roots of certain words and sounds. He talked of the towns and cities on the Danube and Tisza rivers. He talked of his uncles and aunts. I turned to Régis to speak, hoping it would stall his avalanche of information. It did not. Régis sat with teeth clenched.
At several points, as Régis reminds me, Nelson got up from his seat and attempted make conversation with the stewardess. After about three such occurrences, she brought him back to his seat and demanded that he remain there. "I was just trying to make friends," Nelson insisted.

On the way, I attempted to share with both of them some of San Francisco's sights, but every time I pointed out a spot, Nelson brought up the Hungarian language and the etymology of certain words. I too was growing very impatient with the Professor of Everything. It was no longer charming or even funny. When I attempted to show him a San Francisco streetcar, he looked the other direction.

"Nelson," I scolded, "I was attempting to show you something. One of the famed San Francisco streetcars."

Nelson looked at me for a second, and with a totally serious grimace on his face, answered in a deep growl: "I have seen their tracks!"

Régis and I erupted into laughter, as Nelson scowled, seeming to ponder his fate.

When he reached the hotel, we quickly retreated to his room and suggested, via telephone, that perhaps he was not wanted at the party I was planning that night.

"No, Nelson you have to be there! I've put together a huge event and invited all my San Francisco friends. I want them to meet both you and Régis. I'm sorry if I offended you. I just wanted to make sure that you saw a bit of the city while you were here."

Régis had already rushed into the streets to discover the city for himself. Nelson stayed in his hotel room all afternoon, napping

Nelson attended the evening event, charming, I am certain, a great many of my poet friends. But the next day, instead of returning with us to Los Angeles, he bought a train ticket to New York.

Los Angeles, August 13, 2000
Reprinted from Sibila (November 2009) in Portuguese as "Memória: O Lançamento de Nothing the Sund Could Explain."
Posted by greenintegerblog at 8:15 AM