Six Stories of Sao Paulo: The 3rd Night (The Raw and the Cooked) 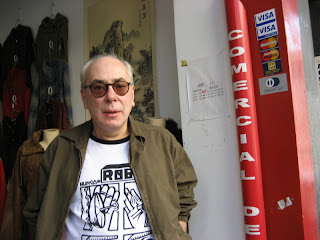 On my first trip to São Paulo, Brazil, in 1997, when Michael Palmer and I celebrated the publication of the Sun & Moon edition of Nothing the Sun Could Not Explain: 16 Contemporary Brazilian Poets, not only were we corralled into a particular neighborhood, but were kept on a regimen of what we then perceived might be Brazilian cuisine: day after day, our hosts Régis Bonvicino and Nelson Ascher, would pick us up and take us to a restaurant where we were served nothing but bife or churrasco: Churrasco Brochet, Churrasco de Fraudinha, Churrasco a Moda, Bife Amazonas, Bife ou Frango a Milanesco, Bife Abebolado, Bife a Calvo—accompanied always with rice, beans or fried plantains.
One day, to our surprise, our friends actually introduced a new-sounding concoction to our diet—Picanha na Chapa—which turned out to be grilled sirloin!
While I certainly enjoy a good steak once in a while, dining every night for two weeks on chewy and stringy grilled steaks does tend to separate those who prefer the raw (Michael and me) from those who eat only the cooked (Régis and Nelson). One day while touring the vast region of São Paulo’s “Little Japan,” Régis turned to us to inquire: “Do you like Japanese food?” I could see Michael’s head suddenly snap into gastronomic attention, his eyes growing large with anticipation. I licked my lips. In unison, we replied “Yes, we do!” Equally in unison Régis and Nelson rejoined, “We don’t.”
The next night we were told we were being taken out for a very special dinner. Our treat turned out to be—how might we have imagined anything else—a steak house, the difference being that the meat was slightly more tender and succulent.
So desperate had we become, that Michael and I snuck out to an Italian restaurant for lunch. The menu, however, was primarily in Portuguese, with even the Italian words being somewhat “Portuguesized.” We both closed our eyes and pointed at our choices, dreaming of fish or chicken at the very least. Beef was served—although in a tomato sauce, with pasta instead of rice.
I must admit that one day early in our stay the head of one of our reading venues took us to a Portuguese restaurant, where we dined on a wonderfully spicy shredded cod. For our very last night in São Paulo, moreover, The Professor of Everything and The Professor Nothing (as Régis jokingly defined the differences between Nelson and himself) took us to a traditional Brazilian restaurant where he dined on various versions of Frijoada. But otherwise, there were no exceptions. Beef was king.
When some months later Régis visited me with his wife Darly and daughter Bruna in the United States, I took them out to several trendy Los Angeles restaurants and held a catered event in my own house before I perceived that Régis had not been eating much. Was he all right, I asked with some consternation. He meekly answered, “Could you take us to a place where they serve beans and rice?”
“And beef?” I added.
“Oh, that would be nice,” Darly cried out.

When I returned to Brazil in 2000, I refused to be intimidated by Régis’ narrow culinary tastes. One day I dined with him at a local fast food eatery, ordering a cutlet of dry, breaded pork. The next night I announced that I was going to the neighborhood Japanese restaurant.
“I don’t like Japanese,” he predictably replied.
“That’s okay,” I blithely responded. “Come along with me. You’ll eat the rice!”
He laughed and joined me in an absolutely pleasant night.