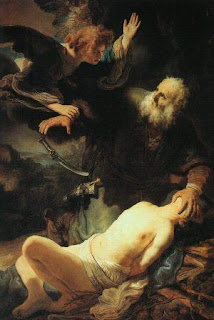 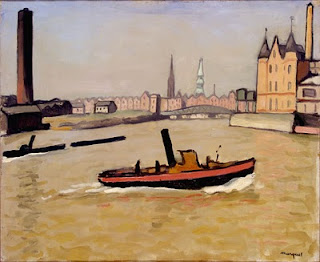 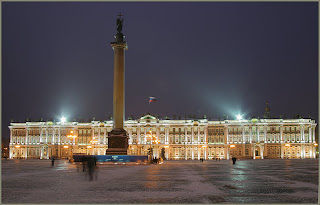 Hurry, Hurry
by Douglas Messerli
On our last day in Leningrad we were given a tour of the grand Hermitage Museum. I do not like tours, and this had one signified everything I hated about them.
We were first taken to see some of the classic paintings, particularly the Rembrandts. I was dazzled by his The Sacrifice of Isaac, but I believe we were all appalled by the realization that some of these paintings were shown in direct sunlight. I also recalled how only two or three years earlier, a insane attacker had thrown sulfuric acid upon the canvas of Rembrandt's Danaë at The Hermitage before cutting it twice through with a knife.
How long might these great works last in such a situation, we pondered. Was there anything that might be done? Certainly any comments we might make would be pointless, as our guide hurriedly rushed us in and out of rooms.
By the time we reached the modernist collections, mostly of great European art, we were literarily being run from room to room as if simply glimpsing paintings was the purpose of museum-going.
Clark Coolidge and I, fascinated by some of the art we had never before seen by Gauguin, Matisse, Kandinsky, Picasso, and French modernists, refused to budge upon the guide's call for us to "Hurry, Hurry," and after some time, the distressed woman returned again and again into the rooms were we straggled, growling at us to hurry along. We stubbornly refused, as she grew more and more agitated.
"We want to see the art," we insisted. Her sour look seemed to indicate that the art was not there for us to "see," whatever that might mean. We were meant, clearly, simply to witness it, to observe the great troves of riches that Soviet government had accumulated for the common man. Dare the everyday Russian take his time observing it, however. It was as if the art were there simply as a kind of shrine, evidence of the Soviet's nationalization of the Impressionist, post-Impressionist, and modern art collections of figures such as Sergei Shchukin and Ivan Morozov.

The more our guide stamped her foot and insisted that we hurry, the more entrenched Clark and I became in our viewing, and I remember staring for long periods at works that I might never have noticed in my usual run-throughs of galleries.
In that sense, what began as a kind of challenge to the busy guide, turned the visit into an intense viewing of art, that revealed works, sometimes by rather minor French artists, in new contexts. Suddenly I could understand why, for example, Albert Marquet or Camille Pisarro, were interesting artists.
"Hurry, hurry," she clapped her hands as if were some misbehaving children. We clapped back and wandered slowly from room to room until she returned once more to scold us.
We left the Hermitage somewhat disappointed, but knowing we had learned, perhaps, more than she had intended us to.
Again, we realized why our Russian friends sometimes behaved what first seemed somewhat churlishly with regard to personal movement. It was payback for the thousands of daily reminders that ingress and egress were always delimited and controlled.