Day Four-Lives of the Artists, from 12 Last Days of the Soviet Union 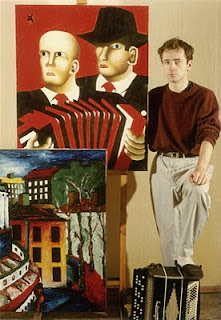 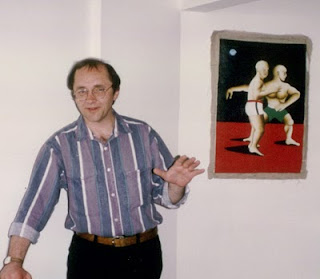 Arkadii Dragomoschenko in the Sun & Moon offices
with Ostap's painting, "The Wrestlers"

Lives of the Artists
by Douglas Messerli

Despite the apparent restriction of Soviet tourist hotels for Russian citizens, poet-friend Arkadii Dragomoschenko joined us each day at dinner in the hotel dining room. His company was a joyful one, and he kept us abreast of Russian events and traditions. Clark Coolidge, Lyn, and I talked with Arkadii everyday on various subjects. I particularly remember when the conversation turned to Women's Liberation, which was dismissed out of hand by both Arkadii and his wife, Zina. "We want to be pampered and not have to work," she declared.

Near the end of our stay, Arkadii invited us to a party at his son's art studio/apartment. The dilapidated space was like something out of the 1920s and 1930s collective housing, a place shared by four or five artists, each occupying a small corner. I recall a woman artist having only a small walking passage, a couple of artists sharing what might one day have been a bedroom. Ostap shared the so-called "living-room." Several of his paintings had been tacked to the walls.
Each of us, as expected, had purchased vodka and other foods (chips and candies) from the tourist shops, where, once again, Russian citizens were not permitted.

Zina had made a dish of chicken drums and wings soaked for days in a hot vinegar sauce, and served cold. The huge bowl of chicken, most of us realized, must have taken her several days, working with other women friends, to accumulate from the almost-always empty food stores. If it was not the best food I had ever consumed, it was, nonetheless, a veritable feast, given her few resources.

Ostap was a handsome young man, proud of his slightly abstracted figures on canvas. I was particularly taken by the brightly colored painting of two beefy wrestlers, and when I expressed my appreciation of the work, the artist immediately took it down from the wall, rolled it up, and handed it to me as a gift. I tried to pay for it, but he refused. Today, after these many years, it still hangs in my offices, tacked to the walls as it originally was, in his studio.

The evening was absolutely splendid, but I could not help but feel some sorrow for these young artists, who lived perhaps not so differently from young New York artists in frigid, walk-up lofts in the early 1950s. But each of their spaces was so tiny it seemed that one might become claustrophobic if they all turned up on the same day to work. Perhaps they had planned it out that they would paint, draw, or sculpt at different times during the week. Yet they all seemed excited and proud to be able to show their art to a new audience whom we represented. Several works were purchased by members of our group. It was, in short, one of the most joyous evenings of our stay in Leningrad.

Posted by greenintegerblog at 7:56 AM