Kier Peters' "Past Present Future Tense" and "Still in Love" 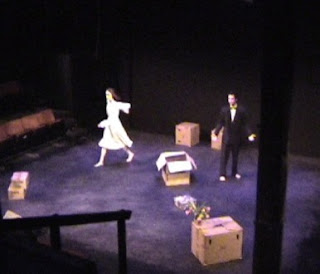 from "Past Present Future Tense" in Austin, Texas
Every so often, I check out the Google entries for my persona, Kier Peters, the pseudonym I use for my playwriting.

I recently found a nice review in Opera News of my Still in Love opera, composed by Michael Kowalski and performed in New York City several years ago.

I also found a photograph of the Humdrum Collective performance of the play, on which that opera was based, "Past Present Future Tense," from their 2006 production in Austin, Texas

Billed as "a chamber music drama," Still in Love, with music by Michael Kowalski and text by Kier Peters from his own play, unfolds in three short acts, each with its own distinctive mode of story-telling. In the first and most inventive section, the two characters spar with each other, spinning out, in rapid-fire alternation, a chain of events set in motion by the man's indifference to the woman's pollen allergy. The dialogue cleverly slips from a discussion of her asthma patterns ("I'm nearly dead by the end of July") into a fanciful, jointly-woven scenario, which rapidly becomes an international jaunt ("We fly into Orly," "I take a night train to Nice") featuring mutual adultery with the same person. The second section is a fuller exploration of this couple's fraught relationship, with conventional, real-time interaction replacing the shared narrative of the first act. Fortunately, the brisk pace of the lines (mainly sung, with some speaking in rhythm) and the imaginative instrumentation (cello and synthesizer, which is employed variously as vibes, harpsichord, lute, piano and Fender Rhodes) prevent the proceedings from descending into soap opera.
In the third and final section, events of the two previous acts are summarized and brought up to date after-the-fact, complete with a "Once upon a time" opener. (It makes sense that Peters' play, upon which the piece is based, is entitled Past Present Future Tense.) This intriguing, wholly original work is well acted and sung by soprano Karen Grahn and baritone Gregory Purnhagen, although Grahn's sound becomes thin and breathy in her upper register, and both occasionally sacrifice perfect intonation to the drama at hand. Composer Kowalski on synthesizer is joined by cellist Yari Bond; they function as two additional characters and contribute to the proceedings considerably. Still in Love chronicles a turbulent but devoted partnership in an unusual and light-hearted way and is well worth investigating by those hungry for something different.
Joshua Rosenblum
Posted by greenintegerblog at 10:01 AM