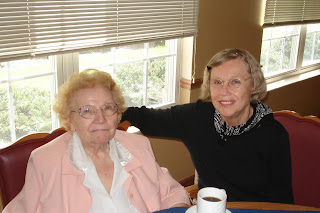 My mother and her friend Ann 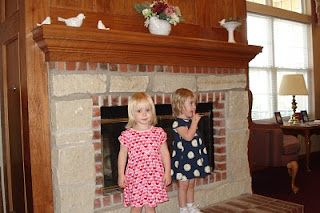 The twins, Savannah and Maggie, perform 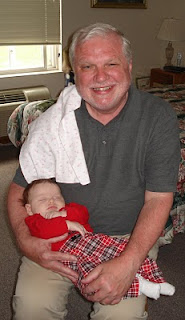 Great-uncle Douglas and Eva
A Glimpse into the Future
by Douglas Messerli
Marianne Hauser Me & My Mom (Los Angeles: Sun & Moon Press, 1993)
My trip to Iowa took place from September 1, 2010 (when I flew from Los Angeles through Dallas-Fort Worth to Cedar Rapids) to September 4th (flying home through Chicago)

On my way to visit my mother—just turned 85 and residing in an assisted living home, Bickford Cottage, in my hometown of Marion, Iowa—I subliminally grabbed a copy of Marianne Hauser’s gentle satire of an aging mother and a mother-daughter relationship, Me & My Mom, published by my Sun & Moon Press in 1993. I should add that I planned to teach this book the following Tuesday in my Otis College M.F.A. course on American Satire.
The big issue of this book is the daughter’s own social and psychological problems, created in part by her mother’s obsessive focus on a dead son (a child, who, evidently, because of numerous birth defects, died in the womb), and the result, more importantly, of her own lack of sensibility and intelligence. The two must now switch roles, the daughter becoming the mother, her mom the overlooked child.
Tucked away at the Bide-a-Wee nursing home, the mother—whom one might describe as an intelligent and sensitive romantic—is bitter to have lost her home, her cats, and, most of all, her personal freedom. She spends much of her time apart from the other nursing home inmates, having learned from her first few months of internment not to cause a ruckus. Indeed, as the daughter describes it, she has slipped off into a private world except for occasional linguistic outbursts that betray her simmering anger.
The daughter, the source of income for her out-of-work, alcoholic husband and her young child, must continue to confront her mother in short visits it is clear she resents having to make. The two confront and console one another with their memories, alternating between anger and simple love.
What is immediately apparent in Hauser’s version of a painful relationship, played out in a hundred ways in millions of lives, is the lack of sensibility in the daughter—and by extension, in the younger generation. The world may have become more “realistic” in the daughter's often course and unimaginative perceptions, but it has lost the wonderment and beauty inherent in the older woman’s memories, one of the richest of which is a breakfast of Eggs Benedict, perfectly cooked, at the beautiful Majestic Grand with a handsome architect, of whom the mother remembers little else. The Majestic Grand has long since become a building inhabited by homeless people, and shortly after its mention in the fiction, it collapses, killing several of its inhabitants. Yet it stands for something that can never be replaced. If the mother cannot remember the name of the man, the meal becomes a motif throughout the book of a world that has disappeared. Throughout Hauser’s short fiction, New York and the remnants of past life are being destroyed, fading and forgotten. A new, less glorious landscape is built up in its absence.
The daughter is without a clue how to rediscover the beauty of that world, and finally, with husband and son, and a new child in her womb, she retreats to an equally run-down country life, which promises an even more dilapidated vision of reality. At least the daughter has no longer to confront her mother, and gradually becomes unable even to write her a note. The old woman has been abandoned, like most of her generation, to their own disappearing memories. And since even the names of presidents as recent as Jimmy Carter are unknown (in what I would argue is a slightly unbelievable premise), evidently, to the daughter and, by extension, to her generation, we can only image a world that is being eaten away from both ends so that by work’s completion, we have only those momentary encounters between the two. When even those confrontations disappear perhaps history ends. A new birth is about to occur, but for what purpose? What meaning might that child discover in a world that no longer holds any significance?

My own mother, Lorna, I reassured myself, was happy in her assisted–living residence, consisting of a two rooms and bathroom. We had attempted to return her to her large suburban house a couple of years after an accident that sent her hurling down the basement stairs, with her right hand permanently damaged. And she seemed eager to return, to give her former life another chance. I particularly had fought hard for that, insisting that we could hire a nurse to stop in for a few hours in order to help her bathe, and that we could provide her with food through deliveries from “Meal-on-Wheels.” On Thanksgiving in 2006, I returned to fix the big meal in her empty house, inviting the whole family to gather round that table once more, partially in the attempt to draw my mother home.
Soon after she returned to the house on Concord Drive, but after one night in the place she had loved so deeply, she called my brother to return her to the Bickford Cottage. “I'm lonely,” she wailed. There was no one there to talk to. She hated her meals-on-wheels, and feared most of all, I presume, the endless silence of the place. Most of her neighbors, although friendly, were younger couples with families. Many of her friends had died or were themselves now in assisted-living homes. My brother helped her move back into Bickford Cottage, and, soon after, sold her home.
Visiting Lorna the day after her 85th birthday, I met her so-called friends. What I wasn’t completely prepared for was the rudeness with which they often treated one another. Like Hauser’s central character, my mother, has remained slightly aloof, a “lady” as the nurses call her, who most of the resident’s love because of her slightly magisterial behavior. Yet as we shuffled down the hall to lunch, a three-pronged, decorative cane at her side, my mother pointed to the woman ahead, and spoke in a voice she might once have used only at a football game, “You see the woman with the scraggly hair? That’s our nurse.”
Another woman was “The one I told you about! Rose, meet my son.” A few feet away my mother continued, “She comes to the table and reads the newspaper every day. Doesn’t say a word!”
I presume the nurses have all grown accustomed to this elderly "honesty," and that many of her friends are so deaf they may not hear what she says “just out of speaking distance,” but the behavior, nonetheless, took me aback.
My mother, however, was not the only seemingly insensitive being in the place. The woman who usually sat next to my mother, Ann, spent the whole lunch telling me that both her former husbands had been secretly—unknown to her at least—gay, that she herself had had a nervous breakdown and “gone in for shock therapy” and that her daughter was in AA, confessions, I presume, brought on by my casually mentioning my “companion.” Perhaps my mother had previously told her I was gay, and she had regaled my mother with these same tales many times; for my somewhat proper mother, didn’t blink an eye, and Lorna later reported that before her shock therapy, Ann had attempted to come to dinner "dressed in her birthday suit."

*Cap did, however, tell me a story with startling detail. One day his wife came home, he reported, and suggested that there was a nearby farmhouse for sale that she'd love to see. So that evening he took her out to see the house. She was delighted with everything about it. "It's perfect," she proclaimed. And before he knew it, they had bought the new farm and were moving in. "Only later did she tell me that she'd long had her eye on that place, and she'd seen the inside dozens of times throughout the years." "She knew what she wanted, and how to get it," I joked. "She sure did!" was his response. "We lived in that house the rest of lives."
Posted by greenintegerblog at 8:45 AM