Moscow Thanksgiving (travel to Moscow in 1989) 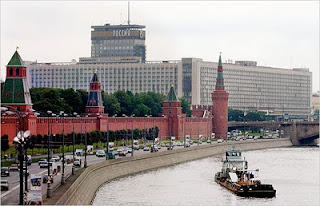 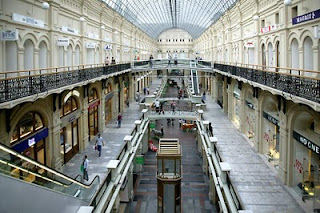 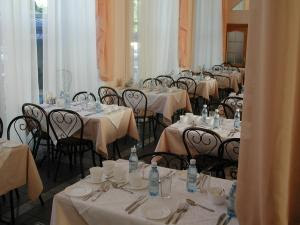 Dining room at the Rossiya

MOSCOW THANKSGIVING
by Douglas Messerli
After a relatively pleasant time in the moderne world of Tallinn, it was quite a shock to return to the Soviet Union, where the 19th century seemed still to exist. The dust of the Moscow streets blurred our eyes, and the buildings, about which we had been forewarned, were notably Stalinist in look. Our hotel was the vast Rossiya Hotel, consisting of 3,200 rooms. Even the nearby Kremlin seemed lost in its hovering shadow. If one found ones way back to the room, it was comfortable enough, but almost unbearably overheated. In 2006 it was torn down to make way for a new, grander hostelry.

Although I continued the pointless activity of shopping in Moscow, it meant little. Hardly anything existed in the shops. Even in the famous GUM Department store across from Red Square there was not even a coat to be found. Numerous shops stood empty. The trinkets left in the few open stores seemed valueless.
ROVA continued their concerts, thank heaven, which provided wonderful entertainment each evening, but in my daily walks I had grown tired of Moscow's ugly streets. I felt after more than a week in this cold country, we all wanted to go home.
One evening we were bused to a large theater on the edge of the city to hear Soviet poets read, our friend Ivan Zhdanov being one of the readers. But of course, the reading was in Russian and most of us could not comprehend what was being said.
Lyn Hejinian met up with a young Russian writer there, whose name I cannot remember. He must have been still in his teens, a handsome and very gentle young man whom she invited for a walk the next day as well.
That day, November 23, 1989, was Thanksgiving back in the USA, and as a surprise our tour guide had ordered a special Thanksgiving dinner so that we might celebrate and be free, at least for one meal, of the standard Russian fare. After our walk, we encouraged our young poet friend to join us.
Russian citizens, despite Arkadii's rejection of the law, were not allowed in the international hotels; and the boy, accordingly, demurred. "Oh, I can't do that!" he insisted.
"Oh yes, you have to join us," Lyn insisted.
"Do come share dinner with us," I added.
"But I can't," he pleaded. "What if they find me out?"
"You're with us," Lyn added.
"But I don't speak English well enough."
"Yes, you do," I insisted. "Besides we'll do all the talking. Just pretend to listen."
And we quickly moved him through the lobby and into our dining room, as we chattered away, placing him at the center of the long table the staff arranged for us.
The dinner was edible, if I remember, although many complained loudly throughout. I believe chicken was served instead of turkey, stringy and without taste. But the potates were fine; even gravy. Did they add any of the other "trimmings?" I can't recall, but just having a change was good for the soul.
And despite regulations, black market dealers approached the tables with bottles of vodka and cans of cavier. I bought both, sharing the vodka.
Several of our group, however, grumpily continued in their commentary on the quality of the cuisine.
I turned to our the young guest. "How did you like the food?"
He turned his fresh face in my direction, a smile creating a crater in its path. "It was the best meal I have ever had in my life."
He was serious! Tears welled up in my eyes.