Shadow of a Process: A Personal Appreciation of Steve Roden 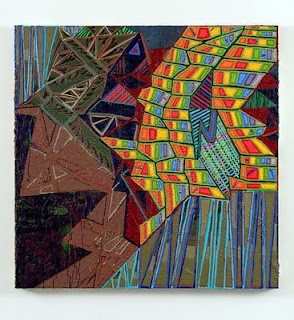 we the darkness with a fire between us, 2009 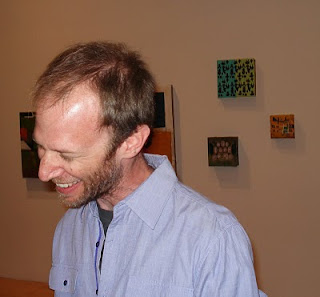 SHADOW OF A PROCESS: A PERSONAL APPRECIATION OF STEVE RODEN

Steve Roden in between: a 20 year survey, curated and with a catalogue essay by Howard N. Fox / Armory Center for the Arts, Pasadena, California, September 12, 2010-January 9, 2011

The wonderful new show of the works of California artist Steve Roden was organized and the catalogue written by my companion, Howard Fox. Accordingly, I have not attempted a “review” of this show, but have tried to write a piece that might accompany the viewer in his or her appreciation of the art.
Indeed, I am not sure that I would have easily “penetrated” Roden’s art without the help of Howard’s involvement with the artist and his work. Surely, I might have recognized—as critics have noted—that there is something, despite the wide range of various forms Roden’s art takes, that hints at an orderly world, or, at least, a series of systems underlying it—that in his works involving numbers, words, patterns, and planes of light and dark there are visible clues to systems behind the art—but I would have had no comprehension of what kind of systems those are.
Fox illustrates some of the many devices that Roden has used in creating his works in his discussion in the catalogue. In Roden’s The Ridddle for example, in which the work is bisected into black and red zones, across which the artist places the words “a riddle which is intended not to be solved but to exist,” Roden began with a quote from Swedish novelist and poet Pär Lagerkvist in his novel The Sibyl. The art, however, does not attempt to tell the story of Lagerkvist’s fiction, but rather employs its “aesthetics of the unresolved.” As Fox writes:

Resolution, determinacy, transparency, reasonable certitude…are supplanted
in Roden’s art by the poetics of incertitude and indeterminacy.

In another work, fallen/spoken, again Roden started with a text of Lagerkvist's, this time a poem, and, with no knowledge of Swedish, translated the words into English-language homonyms, words sounding more or less like the Swedish words might. "Hon knäpper sina händer hop," for example, became in Roden's transformation, "hovering sine waves hop from clapping hands."

His 1996 painting, i am sitting in a room, moreover, was based on a sound composition by American composer Alvin Lucier, who spoke a text into a tape record, retapeing the words onto another recorder, and another, and so on until the tones and sounds became "completely abstracted"; "...the skeleton was still intact but the surface totally unrecognizable," notes Roden.

Nearly all of Roden's art, indeed, parallels, in one way or another, this approach to art. Like John Cage, Alfred Jensen and others Roden generally begins with complex systems that he uses not so much as a frame, but a starting point, an impetus that allows for the creation of the final work.

Some of these systems are so complex that even Roden has forgotten them. And in that fact, as Fox reiterates, these systems and methodologies represent what might be called the shadows of the complete pieces. Even if we sense that ghostly system in the "completed"—or, perhaps, since Roden often returns to pieces years later, working on them anew, we should describe them as "temporarily complete"—it does not serve, however, as a tabla rosa or even a lens through which we can read or see the art. Most of Roden's paintings, sculptures, musical performances, and other artifacts remain, in the end, something close to the abstractions which at the start he appeared to eschew.
Roden is himself somewhat shy and sincerely self-effacing, and that comes across strongly in that his approach sheds most of the evidence of the artist's processes in the final artifacts. While the viewer might certainly discern the work to be a Steve Roden "product," most of us would be hard put to say precisely what that means or even what the work itself means.
But that it means is without question. And in saying that, any viewer recognizes the necessity to dig deep into his or herself to question and perceive the art's significance. It is that "shadow" of process that seems to demand a search. And it becomes nearly impossible, as a serious witness to such art, to simply walk away from most of Roden's pieces with merely a shrug. They demand engagement, encourage us to see them as objects in our world with which he must at least seek to comprehend. For that very reason, Roden has gained a respectful position among fellow artists, collections, and critics—both local and international.
For Roden all his hidden systems—what one might describe the building blocks of his art—emanate from his intellectual and spiritual interests and his attempts to translate them—in a way that most good literary translators comprehend—into a language in which he can better comprehend them or reveal them to a different audience.
And, in this respect, Roden reminds me—more than any other contemporary artist I know—of the great American and European figures of the early 20th century, represented by the editors of magazines such as The Seven Arts, The Dial, The Little Review, Transition and others, who believed in an intense synthesis of the arts, combining literature with visual art and essays on dance, music, theater, and sometimes film. While one recognizes, at times, a kind of a simplistic idealism in some of these attempts to bring together all the arts, it has grown ever more evident within the context of postmodern hybridities influenced by Cage, the Fluxus Group, and other individuals that that aspiration was and remains an important perspective of the democratization of American art in general.
It is little wonder, accordingly, that I feel so at home in Roden's exhibition, as radically different as are the pieces he has created. For it is precisely this embracement of various genres representing cultural and social complexities which I have urged in my own poetry, fiction, publishing, and in the pages of these cultural memoirs. It can be no accident that Roden's show, titled in between, is precisely the way I have described my own work, including my collaborative poetry collection Between.