Antwerp--Walking (on my trip to the Netherlands and Belgium) 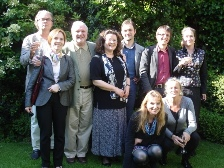 the publishers invited in June 2010 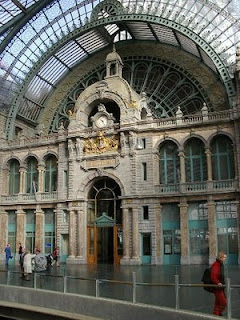 the famed entry to the Antwerp railroad station 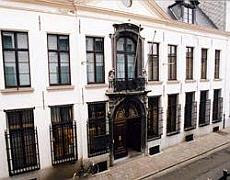 Letterenhuis (The House of Literature) 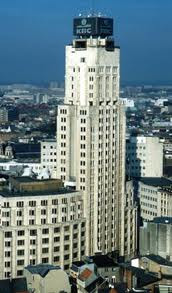 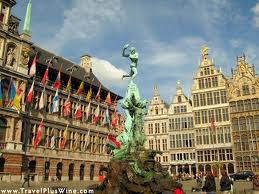 In June 2010 I was invited, along with publishers from several countries*, to Antwerp to explore Flemish literature and meet with publishers of Flemish writers. I have long enjoyed Flemish writing, and had already published Stijn Streuvels, Maurice Gilliams (on both Sun & Moon and Green Integer), Paul Snoek, and Hugo Claus, and had made commitments to publish Ivo Michelis and Paul van Ostaijen. Yet I had never been to Belgium or even to the more popular Amsterdam!
What I hadn't prepared for was that in the past couple of years I had begun to suffer from serious arthritis, and although I could walk for long periods, after a few hours my knees gave way and both legs ached from the knees down. Yet the busy schedule the Flemish Literature Fund had prepared involved, primarily, city walks.
I love walking, and in my younger days I walked European cities for hours at a time. I think I have walked the length and width of Paris several times, and I just been to Paris to visit Joe Ross, Laura Wilber and their children (for whom I represent a kind of uncle) the few days before I arrived in Antwerp. In Paris I had also done a great deal of walking with the kids, including a long walk through Jardin du Luxembourg (where the children played happily in an enclosed playground), to the Marché Saint Quentin from their apartment on Boulevard de Magenta, and, by myself, a walk from Blvd. Magenta to the Left Bank for an appointment with publishers at P.O.L, which unintentionally included a walk back. So by the time I reached Antwerp with my huge suitcase I described as being akin to traveling with a fat aunt, my legs were already in pain.

Yet the moment one reaches Antwerp by train, the architecture overwhelms everything else. Barbara Epler, head editor of New Directions, saw the station so wonderfully described in W. B. Sebald's The Emigrants. Having not yet read that Sebald book, I, moving up the dark swath of the escalator, was hit in the eyes by the visage of a gold insigniaed and glass wall of stunning beauty as if I'd suddenly arrived in a great cathedral instead of a mere place of passage. And for a few minutes, the aches I had been feeling disappeared.
I quickly taxied to our lovely hotel, a former convent, called Elzenveld. There was the original chapel and sculptures in the courtyard below our windows, one of Gilliams. I visited a bar across the street where I had good soup and a drink. That evening we were invited to a festive party at the offices of the Flemish Literature Fund. A representative from the Fund arrived at 6:00 to take us, via tram, to the offices, but the affair was primarily a cocktail event, which meant hours of standing. I simply had to sit, taking me somewhat away from the center of the conversation. I would stand for a while and sit again. Stand and sit.
The group decided that it would be preferable to walk back to the hotel, so I trudged along, knowing that I would suffer again the next day. I think it was then that I realized I was the eldest of the group, maybe only 5-6 years older than Asbjørn, but several years older than most of them. My seemingly decrepit condition truly angered me, for a few years before I'd have joyously walked from sunrise to sunset!
The next morning, after an early breakfast with Czech publisher Marek Seckar, there was a walking tour of the city, as we passed by the Grand Place and the Cathedral before arriving at and touring (standing even while the docent lectured) the Heritage Library Hendrik Conscience. The visit lasted longer than expected, so we did not get to see the Carolus Borromeus church on the way to the House of Literature.
The House of Literature (Letterenhuis) is an amazing place, a museum of literature, impossible to imagine in the US. There were books, informative panels of dozens of writers, films, letters, and other matter of all the great Flemish authors from the beginning of the breakup of Belgium from the Netherlands in 1830. The tour occasioned a crash history in Flemish politics, literature, and the language, Dutch with some French-sounding words and other colloquial differences. The lecture helped me to better understand the prickly forces which are now threatening to split Belgium apart, and by pointing up the self-consciousness of Flemish writers, it helped to explain why I had been so taken with almost all the authors from Flanders I had read. In part, it is this sense of difference, so potent in an otherwise French-speaking country, that somewhat isolates the Flemish authors from even their Dutch neighbors. And, at the same time, the dense and dark history of Flanders including, to varying degrees, some Flemish citizens capitulating to or, at least, associating with the Nazis, makes for a darker vision, so apparent in Hugo Claus's work, for the contemporary Flemish writers.
Our next walk was to the WPG Publishers Group offices, where we had lunch and met with three presses, all of which I had previously dealt with: De Arbeiderspers, De Bezige Bij, and Querido. In my meetings, perhaps the only time we were permitted to sit, I updated them about my projects and discussed missing contractual items.
Following those meetings, we walked to a bar near the bay where Jewish immigrants had once arrived. From there, author Joseph Pearce, having written a book on his Jewish background, took us on a tour across the city to the Jewish quarter, where we entered a bookstore where he read from passages of the memoir-fiction.
Another short walk brought us to a brasserie near the railroad station, where I ordered steak "bleau," as did Asbjørn, with my pommes frittes. I found the steak so rare that was difficult to cut.
Finally, we walked the long way back again to Elzenveld, late in the night. I ached all over.
The next morning we walked again, this time at 8:30 in the morning, to the Antwerp Museum of contemporary art, where we were lectured to by the boek.be distributors—a truly uninspired event, during which, for the first time in my life, I kept nodding off—followed by a round table discussion by Flemish critics Tom Van Imschoot, Jos Borré, and Matthijs de Ridder. In the afternoon the Fund had scheduled more publisher meetings with Amstel, Contact, Wereldbibliotheek, De Geus, and Podium. In short spaces where we were allowed free time between meetings, I walked down to the galleries of the museum, which were displaying a vast array of Flemish contemporary art, some pieces of which appeared like imitations of other European work, other pieces of which were quite fascinating.

After some soup and quiche at Patine's, we were taken to a beautiful house, now rented out for just such events, where we heard readings and saw films by writers Rodaan Al Galidi, Paul Bogaert, Rachida Lamrabet, Jeroen Olyslaegers, Koen Peeters, and Paul Verhaeghen, all published by one of the largest Flemish-Dutch publishers, Meulenhoff/Manteau. A lovely dinner followed with, once more, a long trek back to Elenveld.
On June 3, we were slated to travel by bus in Brussels, the trip I describe elsewhere. But beforehand, we were slated again for a walking tour of Antwerp, this one with the gay author and charming raconteur, Tom Lanoye. He took us first to the famed Theo eyeglass shop, sporting some of the most charming and outrageous eye glasses available, popular with celebrities throughout the world. I dared to ask for the prices, whereupon our group got a small sampling of the range of the glasses available, from relatively low prices to eyewear that cost thousands of dollars.
We then visited, across the street, Boerentoren (the farmers' tower), the tallest building in Antwerp and first skyscraper on the European continent, from whose glass-walled top we could witness the entire landscape of the city. There Tom talked about his own writing and read us some of his work.
Tom later took us to a fashion designer several blocks away, in the fashion district, for a short visit before we caught our bus to the town of Meclin and the city of Brussels.
By the end of these three Antwerp days, I had almost loss all feeling in my legs, while my feet were swollen and red. It seemed sad that a walking trip of a city like Antwerp was no longer a possibility for me. I was pleased, however, by what I had witnessed.
It was interesting to me that in the Elsschot novel I read upon my return to the US, the plot consisted mostly of scenes where the characters walked the streets of Antwerp, lost and searching for a woman they had previously met. Still, the train and its glorious station is the image you take with you as you leave.

*The other publishers were Asbjørn Øverås (from Aschehoug in Norway), Giovanna de Angelis (from Fazi in Italy) Seid and Sibila Serdarvić (from Fraktura in Croatia), Marek Seckar (from Host in the Czech Republic), Christine Popp (from Luchterhand in Germany), Babara Epler (from New Directions in the US), and Beata Stasińska (from W.A.B. in Poland).