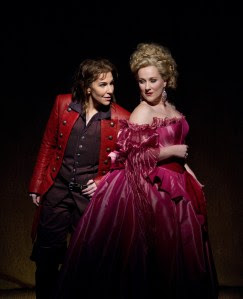 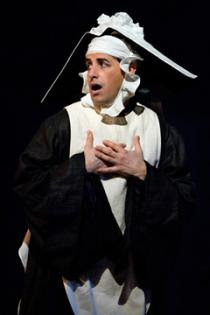 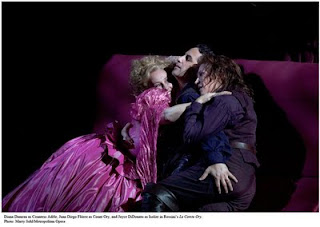 Rossini’s 1828 opera, Le Comte Ory is one of his most memorable and truly humorous works. However it is seldom performed. The Metropolitan Opera of New York had never before mounted a production of it until April 2011, an excellent rendition directed by Bartlett Sher which was presented in a live-HD broadcast on April 9, which my companion Howard and I attended.

For one of the first times in my memory, the opera began without a curtain, attempting to recreate the theatrical conventions of the age, allowing the Prompter to be observed throughout, and using cast and chorus members to enter and exit openly with sets and props.
We are in Touraine around 1200, where most of the men of the community have gone off to fight in the Crusades. Outside the castle of Formoutiers the women, who have pledged a vow of chastity in the absence of their men, gather outside the castle where they have moved in with the Countess Adèle to protect themselves while serving her.

In love with the Countess, the irreparable Ory (Juan Diego Florez) has disguised himself as a hermit, sending his friend Raimbaud ahead to announce his arrival. The women, aware to the hermits’ legendary ability to grant all their wishes, bring him a bounty of food and gifts, each hoping to get a chance to speak with him, revealing their desies. Since the women have been so long in solitary, they are desperate for the return of their husbands—or, at least, the attentions of a man, all which Ory, when he appears, turns to his advantage. One of the great joys of this slower moving and somewhat less invigorating first act (the music of the act repeats many of Rossini’s songs in his earlier opera Il Viaggio a Reims) is Florez’s comic miming as, in his long beard and dingy clothing, he greets each of his supplicants with numerous promises and strokes of her body and hair.

Meanwhile, Ory’s tutor (Michele Pertusi) and his page, Isolier (Joyce DiDonato) have coincidentally arrived in the same area, hoping to find the missing Ory and bring him home before he does any damage. When the tutor hears of the presence of a noted hermit in the area, he is certain that it must be his student, proclaiming to Isolier in the long lament of his “honorable” role in life.

When Isolier encounters the hermit, he also asks the “holy” man for advice, admitting that he is love with the Countess and that he has a plan how to enter her retreat, dressed as a female pilgrim. Ory, as the hermit, encourages him, proclaiming that he will do everything in his power to help.

When the hermit meets up with the despondent Countess, his advice to her is that she must find love, embracing it immediately to rid herself of her depression. When the Countess sees Isolier nearby, she quickly falls in love, as Ory, tries to warn her to beware of his former page, in hopes that he himself may ultimately be the object of her love. Her paean to Isolier (“En proie à la tristesse”), turns into a wonderful tussle between the two wooers, Ory and Isolier, as they vie for the Countess’s favors.

The tutor arrives just in time to see through the hermit’s costume, revealing his student’s reprehensible acts, as the women, in horror and dismay retreat once again into the castle, vowing to remain in isolation.

If Act I is charming, Act II, although much simpler in terms of plot, is the heart of this opera and for which Rossini wrote new music. As villainous as always, Ory determines to employ Isolier’s plan to lay siege to the women of the town and to seduce, most particularly, the beautiful Countess. Dressing as nuns, he and his numerous followers, arrive at the castle in the middle of a stormy night, proclaiming that they too have been attached by Ory, pleading to be allowed protection within the castle walls for the night.

The Countess eagerly permits them into her company, finding rooms for the entire group, and speaking with Ory in nun’s habit as the representative of the group. Florez plays his role of Soeur Colette with great vigor, alternating between a shy and frightened pilgrim and a woman in need of love and its caresses, thoroughly confusing the Countess. But that is only a warm up for further mischievous acts.

Raimund, having found a cache of wine and liquor, passes out the bottles to Ory’s group, as they sing a drinking song (“Buvons, buvons”), between the entrances and exits of the Countess’s servant Ragonde, suspicious of the noises coming from the kitchen. The song is completely extraneous to the developments of the opera, but the very idea of a group of bewhiskered nuns drinking bottles of wine creates a sense of hilarity that is a perfect introduction for the next scene, in which Ory attempts to break into the Countess’ bedroom to rape her.

Fortunately, Isolier, come with the news that the women's husbands shall soon be home, realizes that the hairy pilgrims are Ory and his band, reporting the news to the Countess, who, together with him, plan their revenge on the Count.

In the Met production, the bed is lifted somewhat vertically so that he can witness the absurdity of the event, as in the dark, the Countess courts Ory, while Isolier lays silent between them, receiving most of the intentions of his bodily press, while Isolier plants kisses on the lips of his beloved. It is an absurdly funny scene, given the fact that Isolier is played by a female mezzo-soprano. Accordingly, if you perceive the situation as it is in the fiction, Ory is making love to Isolier, with two men and a woman upon the bed; but if you perceive the work in terms of their actual sexes, it is two women lying upon the bed with a man, all eventually becoming wound up and around each other as if in orgiastic joy that is either gay or lesbian. Scher has directed this so flawlessly that when the deception is finally revealed, Ory stands with a slight smile upon his face, as if he has not at all minded the confusion of sexual identities, singing out in praise of marriage which brings home the man. With the help of Isolier, he makes a final escape, presumably to seek out others to trick into love.

Just moments before the show began, Florez had sped away from his wife’s bedside, having just witnessed the birth of his new son. He reported between acts that he had not slept all night.