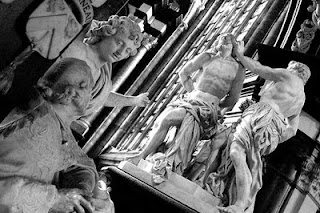 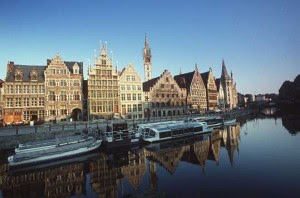 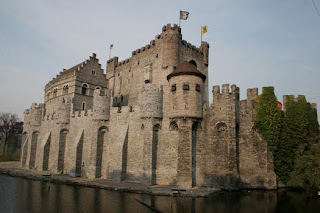 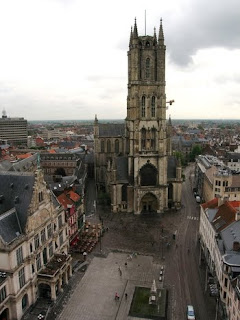 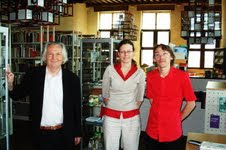 I had planned to spend my final day in Flanders in Antwerp, touring the city by myself, and finding a good restaurant for the evening. But when Tom van de Voorde invited me to his home, I really could not turn that offer down to see Ghent and, in particular, the Ghent altarpiece in the Cathedral there.

I left the city by train early in the morning, again walking, this time back to the train station. But at least I didn’t have my large “auntie” suitcase with me (I've joked elsewhere that traveling with my large suitcase was like taking a trip with a large maiden aunt), and I felt relatively lightweight and was prepared to enjoy the day.

Once in Ghent, I thought that I might be able to walk to Tom’s house, but after asking a couple of people for directions, I realized it was quite a distance, and took the streetcar instead. Fortunately, once I was told which car to take and at what stop to exit, the trip was an easy one, and I found Tom in his beautiful apartment which faced one of Ghent’s many canals.

Tom served coffee and showed me his quite extensive poetry collection before we set off, stopping by a pleasant restaurant near the main center of Ghent where I had a salad and wolfish, also known as Seawolf.

Tom suggested that we take a boat trip around the center-city canals, and I, loving all sorts of water travel, didn’t dare to tell him that such a trip in the hot sun would turn me bright red.

The tour, led by a friend of his and his wife’s, was a beautiful one, and I thoroughly enjoyed it, despite that my face, arms, and other exposed body parts were all in a blush. Sites along the way were the old castle, the only wooden house in a city of brick and stone buildings, and views of the absolutely beautiful guild halls. There’s something incomparable to slowly gliding along beside the streets, observing the city en route.

Next stop was the cathedral, where Tom told me a kind of horrifying story, funny nonetheless. Much of the beautiful white marble work, including the sculpture and tomb of Bishop Triest inside St. Bavo’s Cathedral (Sint-Baafskathedraal) was created by the then-renowned Flemish artist Jerome Duquesnoy, the younger. Throughout the period of installing his sculptures, he commanded that they be kept from public view by large hanging canvases and arras. One day, however, a guard dared peek into the area where the artist was working, only to discover Duquesnoy sodomizing a young boy, his model and assistant. The city elders where outranged, and he was soon after tried, set upon a pyre and burned to death in the large square outside the building.

The sculpture was lovely, as was the great P. P. Reubens painting “Saint Bavo Entering the Monastery.” But when we attempted to see the better known The Adoration of the Mystic Lamb by Hubert and Jan van Eyck, we found only one small section of it on view; it was evidently being treated for conservation. Outside the cathedral, in the square was a group singing English chanteys, attempting to stir up interest for the Ghent Opera’s new production of Benjamin Britten’s Billy Budd.

By this time I was quite exhausted, but Tom suggested we visit the nearby Flanders Poet’s House, a wonderful library containing every book of poetry published in Flanders in Dutch and in translations. Not even the well-run Poet’s House in New York can match the professionalism and complexity of this collection. I was enthralled and loved meeting the founder and the collection’s curator.

I was nearly crawling by this time, so painfully did my legs hurt. I cursed my my arthritic limbs, but I had enjoyed the entire day nonetheless. I took the train back to Antwerp, slowly transporting myself by foot, stopping along the way for a drink, to my hotel, collapsing into bed and a brief nap. I did venture out to De Markt, a nearby restaurant, later, where I inexplicably had a hankering for Italian food, and ordered up spaghetti.