"Irresolvable Pulls of Life" (on the death of Emma Bee Bernstein) 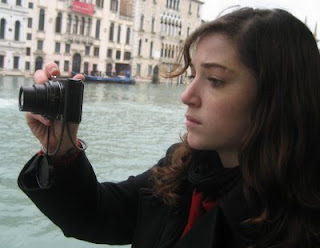 The saddest event for me in a very distressing year was a telephone call from my dear friends Charles Bernstein and Susan Bee on the afternoon of Saturday, December 20th, reporting that their daughter Emma had died in Venice at the age of 23.


She had gone to Venice to work as an intern at the Peggy Guggenheim Collection, but despite that achievement and a recent contract with Seal Press for the publication of GirlDrive, a photographic and written tour of the country she made with her friend Nona Willis Aronowitz, Emma had been recently depressed, a condition apparently exacerbated by a car accident during the summer. Her father had flown to Venice to see her, spending some days with her touring cathedrals and museums, where she delighted in pointing out to her father the dazzling beauty of the art.


The family spoke with her every day, sometimes several times, but just before her death they had not been able to reach her where she was staying, finally deciding to call her at the museum. Emma had taken a break from work, and the person they reached said she had left work early because she was not feeling well. A few hours later, when they called back, they found out that Emma had committed suicide in the museum.


I feel uneasy even describing these events, because I would rather think that she was incapable of such acts, particularly given her ebullient personality and the deep love she felt for her family—and theirs for her. Emma seemingly had everything to live for: she was beautiful, highly gifted intellectually and artistically, and a naturally curious being who seemed destined to achieve acclaim in creative endeavors she had already begun.


For several years, beginning when she was only 12 years of age, film director Henry Hills had documented a series of interviews she conducted with major creative figures, including Susan Howe, Richard Foreman, Tony Oursler, Bruce Andrews, Fiona Templeton, Jackson Mac Low, and others. That film, Emma's Dilemma, had recently premiered to laudatory reviews, particularly noting Emma's ability to ask probing and unusual questions that brought fascinating and revealing responses from her interviewees.

Howard and I had been out that afternoon of December 20th buying a Christmas tree, and were just beginning the ritual of hanging ornaments upon it—one of my favorite activities of each year—when the Bernstein's close friend Nick Piombino called from their apartment in New York where he had rushed to comfort them upon hearing the news. I talked briefly to Charles, who wept at some length. Susan was unable to speak.


When the conversation ended, I turned to Howard and also burst into tears. It was a sad evening, and all night I stayed awake trying to understand why Emma, who had seemed so indomitable for so much of her life, would have brought it to such a tragic ending.


I was reminded that just the day before I had had lunch with Diane Ward, who asked after Emma (she was soon to perform in the same series that Emma, Susan, and Marjorie Perloff planned to celebrate for another of Emma's books, published by the feminist press Belladonna). I had known Emma from her birth, and watched her all the years of her young girlhood, but had not seen her often since she gone off to the University of Chicago, from which she graduated with honors in 2007.

Now I suddenly knew that she had been suffering, suffering from something that, as her father expressed it in his eulogy at her funeral, "grabbed hold of her hand and would not let go, no matter how fiercely she fought... We know Emma was always fierce so let it not go unacknowledged that in her last moments she struggled fiercely and with all her soul against something more powerful than she had ever known. Emma showed the same courage in her last days as she did throughout her life; the courage that made her seem to herself invincible and to us indomitable – a blazing force of nature, a fiery comet that lit up our lives, burning so bright it sometimes blinded, sometimes scalded, burning until suddenly, catastrophically, the ball of fire that she was expired."

On the 21st, I again called the Bernsteins, this time talking to Charles' mother Sherry, as well as Charles, Susan, and their son Felix. All were suffering awfully, but Susan was clearly having the most difficult time of it, repeating, as I had the night before, "why? why? why?" The family was now faced with the difficulty of retrieving Emma's body from Italy. Fortunately, the head of the museum had had experience, in the instance of Peggy Guggenheim's death.


All that night I kept wishing that what we all knew to be true, that she had in fact died, was a lie, that somehow it had been a terrible mistake, an error of reporting, that she would somehow rise like Lazarus from the event and return to her parents and friends.


Strangely, when Emma was only two years of age, I wrote a poem for her that was titled "Lazarus: A Parable," a poem beginning with a created maxim of my Maxims from My Mother's Milk:

Now you are
To become E
Ventually who
've only begun
To uncover, slip
The blanket back
Rise, walk
Before their eyes
Become adjusted
To your size, speak
Against the old wives'
Tales told you
About this place, there's a door
A street. Everyone's hungry.
Meat the earth
With your feat!

It was not really about a death and resurrection for me at the time, but about the wonder of a child growing up so quickly before our eyes to become someone different from anyone in the past, a person who could represent sustenance of the human race through their acts, acts undefined by the past.


Emma was, in fact, such a person, a young woman who would "meat/meet" the earth with her achievements. But now she would not rise, like Lazarus, no matter how much we might wish. She had been taken down by some inner demon who would not let her go. Her father described such a terrible situation in his moving eulogy:

"I wish I could use some black magic, fueled by all our grief, and bring Emma back. I wish, like, Orpheus, I could go now to the underworld to call her back to life, as my trip to Venice now seems like a journey to Hades, travelling alone by boat to a dream-like world of water and labyrinthine streets in a vain effort to rescue her. And yet every day I think there must be a way, that of all people, Emma, like the Houdini she was, would find a way; only to have such idle waves of compulsive thoughts smashed on the shores of reality."

Emma, it is now clear, was being torn by the inner and outer self. On one hand she could describe her book as being "about gutsy young women across the American cityscape. It's about the past and the present, and it glimmers on the future. It's about the promise of the open road." And yet, as she revealingly wrote in her essay "What I Learned in School Today: A Soliloquy of Sorts," Emma felt an irrefutable pull between that gutsy future and her inner self: "All inner and outer life finds itself irresolvable," she writes. "Attempts at talking through the images and through words are always rendered through a web of misunderstanding; the requirement of a medium in all communication always necessarily dilutes and warps the message. ...[there is a] fundamental disconnect between our inner cognition and our image in the mirror."


What we saw as a young women with endless potentiality was also a being inwardly suffering. Now we are left by her silence. For those of us still here, that silence—given the marvelous voice of hers that we remember—is nearly unbearable. The void is something that will be with us forever.


Her brother, 16-year-old Felix, was the wisest of all, even while singing at the funeral the poignant Cole Porter ode to loss, "Everytime We Say Goodbye," advising his parents that they must not think of Emma's death, but of her life. The first two paragraphs of Felix's own statements about Emma's death clearly testify to immense possibilities recognized in youth:

I can’t help thinking of the line, “When one door closes, another opens,” and what that has meant to me in the past few weeks. One door has closed, just as all my doors were opening, all my lights turning on. And now to go through those doors is going to mean something entirely different. My path was disrupted yet has not changed. My destiny will have a loss in its memory, to be the background of whatever my foreground becomes. But I walk the path just the same, learning to embrace the shadows that follow me. Emma’s writings suggested that one must be despite polarities. One such polarity, life and death, is something that will be hard to ignore. Yet I will persist in my loving of Emma. Our love was never constrained to life and death, anyway, and it won’t start now.

How artists around me have understood this demonstrates how coping requires you to find the process that means the most to you. I sang at the funeral – “Everytime We Say Goodbye.” To the audience it may have been a comfort to hear a musical expression of their grief. To me it was a comfort to express my doors paradox: As I said goodbye, it was time for me to say hello, to announce myself as an adult to the over 400 people present and to sing in front of them: expose my destiny to them.

As pained as we all are about the death of this beautiful young woman, Felix, I suggest, is right. Despite those darker pulls on our souls, we must all move through that new door. As I tried to tell Emma in that long-ago poem: "About this place, there's a door / A street"; we each have no choice but to walk through the doors to our destinies.

Emma Bee Bernstein in Venice
photographed by Charles Bernstein
Posted by greenintegerblog at 11:37 AM 6 comments: