The most astounding event of 2018 to date has been the murder of 17 youths and adults by a 19-year old ex-student of Marjory Stoneman Douglas High School in Parkland, Florida.
The shooting was not the astounding event; we had just experienced one of the very worst of US shootings a few months previously in Las Vegas. School shootings had gone up all over the country, and we all still held the painful memories of the terrible Sandy Hook Elementary murders in 2012. My Year 2013, “Murderers and Angels,” had focused on the very issue of the slaughter of Americans by guns. I might have every year since summarized the effects of guns and the murderers preferred automatic weapons, but it has just been too painful to do so. Gun violence is destroying many American cities such as Chicago and New Orleans, and is now a major terror for young grade school and high school students.
Just as when I was growing up, when we did major drills for the possibility of nuclear attack—the experience of which still haunts my dreams and probably accounts for a great deal of my world view—these children of two or three generations later are weekly undergoing drills for possible attacks by other young shooters. They represent, as even they see themselves, a gun-shocked generation, fearful always to be in what we, their grandparents and great-grandparents perceived as sanctuaries. Throughout so much of my youth, I spent more hours at school than I did at home, arriving early in the morning for band practice, and staying late into the night for theater rehearsals. My school was, in fact, my home, and I felt safe there. But quite evidently that has now changed.
The astounding event about this sad and painful new shooting was not the “oh yet again” factor, but the reactions by the young survivors, all so-seeming intelligent, well-spoken, and so very fed-up with the violence they have had to witness.
By all accounts, this is a very special school, made up of basically of well-to-do suburban-oriented families, and even their children have described their school as being “special” and, just perhaps, a bit elite. Yet here were a broad mix of Americans such as the young Emma Gonzalez, who brilliantly if tearfully spoke up:

“We will be the last mass shooting. Just like Tinker v. Des Moines, we are going to change the law. That’s going to be Marjory Stoneman Douglas in that textbook, and it’s all going to be due to the tireless effort of the school board, the faculty members, the family members, and most importantly, the students.” 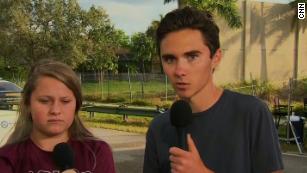 The photogenic and most articulate senior, David Hoog, who refused to even return to the school until gun legislation was enacted, responded:

“Literally any legislation at this point would be a success considering the fact that so few legislators in Florida met with us. The fact that they want people to forget about this and elect them again as the child murderers they are, that’s unacceptable and we’re not going to let that happen.”

After visiting some of the Florida legislators, senior Chris Grady, repeated:

“We are going to talk to them about common-sense gun safety. We hope to get a lot done, but we also know how politicians are.” 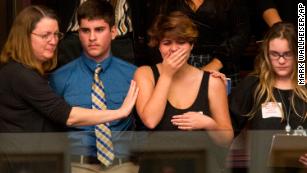 Over and over these young students articulately made their cases, arguing, as Junior Charlotte Dwyer spoke out:

“We’re not backing down. Usually it starts to die down around now. We’re not little kids. We’ve had to grow up so fast in the past week.”

Predictably, the NRA and other gun lobbies fought back hard, demanding no changes to gun law were needed. Congress-leader Paul Ryan again restated the refrain, “This is not the time for such a discussion.”
The buffoon Trump at first seemed ready to possibly talk about changes in age requirements and maybe even a ban of the preferred weapon of choice, the AR-15, but then, after meeting with the NRA hacks, seemed to backtrack on his statements. NRA supporters even begin to attack the young students who had spoken out, proclaiming that were either actors or were “put up to it” by their parents, as if young people in high school might have no view of their own. Do they remember the student response about Vietnam?
And we still do not know whether any changes might be made on either the national or state levels.
What we do know, as writers in the Los Angeles Times, David Hughes and Mark Bryant, observed, “strong gun laws work.” Despite the denials of gun lobbyists, who claim there is no evidence at any law might alter the pattern of behaviors of such mentally disturbed killers, these writers convincingly argue, for example:

Multiple studies from researchers at Johns Hopkins University have
found that such “permit to purchase” laws, which include a particularly
strong background check, reduce homicides, suicides and gun trafficking.
Literature reviews that examine a wide range of gun policies throughout
the U.S. also consistently find that these laws save lives.

We’ll have to wait and see if the statements of the Parkland school survivors, who so all brilliantly have spoken out, will truly influence legislative bodies, national or local. But quite clearly, at least in this case, something has changed. These kids have attempted to alter the way the cynics among us have long dominated such discussions; the children have spoken up, quite intelligently and magnificently, and they will all soon be voting. For the first time in years, I can feel hopeful about the future of my country, particularly if the educated students of Parkland are voices in that future.