out from under and into the fray

Niall Ferguson The Square and the Tower: Networks and Power, from the Freemasons to Facebook (New York: Penguin Press, 2018)

In a year devoted to “Towers, Circles, and Squares,” how could I not read Niall Ferguson’s 2018 volume The Square and the Tower: Networks and Power, from the Freemasons to Facebook? This, I told Howard, was definitely a necessary book, despite the fact that it too me many weeks to read. 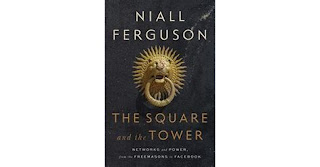 And I have to say that, at first, I was quite fascinated by Ferguson’s history of networks, from the earliest days of history to the present, as well as his charts and grafts of the interrelationships of leaders and others, and how, within different systems presented within Ferguson’s metaphors, functioned for their societies and times.

The hierarchies which, from ancient times on, worked from top down, with the social order controlled from the top, with various structures each a lower levels that made supported and reified the “tower.” Although Ferguson questions the verticality of the structure:

This is roughly how most people think about hierarchies: as vertically
structured organizations characterized by centralized and top-down
command, control and communication. Historically, they begin with
family-based clans and tribes, out of which (or against which) more
complicated and stratified institutions evolved, with formalized division
and ranking of labour. Amongst the varieties of hierarchy that pro-
lifererated in the pre-modern period were tight regulated urban polities
reliant on commerce and bigger, mostly monarchical, states based on
agriculture; the centrally run cults known as churches; the armies
and bureaucracies within states; the guilds that operated to control
access to skilled occupations; the autonomous corporations that, from
the early-modern period, sought to exploit economies of scope and
scale by internalizing certain market transactions; academic cor-
poration like universities; and the supersized transnational states known
as empires.

A network, on the other hand, as Ferguson argues:

connects two nodes via five intermediaries has six edges. The phrase
“six degrees of separation” was not coined until John Guare’s 1990
play of that title, but it therefore had a long pre-history. Like the concept
(made famous Disneyland ride devised in 1964), or the more technical
concept of closeness, it neatly summed up the mid-twentieth century’s
growing sense of interconnectedness. There have since been numerous
variations on the theme: six degrees of Marlon Brando, six degrees of
Monica Lewinsky, six degrees of Kevin Bacon (which became a board-
game)…. Recent research suggests the number is now closer to five
than six…. [see my own essay about this phenomena in my
essay “Criss-Cross” in My Year 2011.]

For many pages of this large format nearly 600-page book, accordingly, you might imagine that the author is arguing for networks over the hierarchical structures, almost suggesting a solution for the Trumps and other dictatorial figures in our current political crises. After all, our cultures, from the Renaissance on developed from the world of towers into network or “square” like cultures. The networks of enlightenment, from Gutenberg on, changed the entire world, with a great deal of shifts back and forth from the highly structured societies to the more loosely complex ones, including, as his title suggests the enormous influences of tightly structured network societies such the Free Masons, whose power was based primarily on a tightly-knit network-like community.
From in the Cambridge, homosexually-related, “Apostles,” we see a growing relationship between great intellectuals from Bertrand Russell, A. N. Whitehead, and eventually the Bloomsbury group. 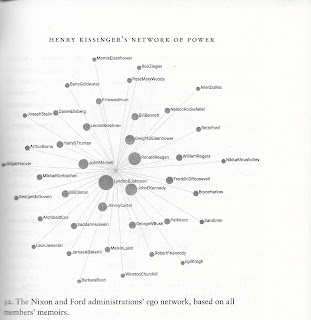 Yet as his book goes foreword we perceive a darkening vision of the “square” or network communities. By the time Ferguson reaches the network-figure Henry Kissinger (to whom he has previously devoted an entire book), we begin to see the equal problems that result from the intense networking involved with one of the most heinous figures of Nixon’s administration, completely involved with the Viet Nam war.

By the time he begins his discussion of Facebook, we already know that the square is not necessarily so preferable from the tower.
Ferguson’s writing has been described by critics as being too simplistic, and I recognize those perceptions in my own responses to his conclusions. But, if nothing else, he forces us to question our own ready-made conclusions. Squares and towers, given their geometries, are not so very different when it comes down to the common man.
He never talks about circles, with the exception of the inbred Bloomsbury group, but we might explore that avenue more fully as opposed to the closed-off societies of the tower and the dangerous internecine abuses of power, a product often of networks or public squares.
And one might certainly question Ferguson’s simple binary of “networks” and “squares.” More often, these might be represented as circles within squares, as simple interrelationships that do not necessarily encourage a larger network of political power not even a blind hierarchical devotion. Yet, we all recognize the simple dangers of meeting on a square which can lead to a larger political event that swallows us all up into its vortex, or, even worse, being punished for not obeying the tower-like requirements of behavior.

Posted by greenintegerblog at 10:48 AM No comments: