“My Crickets: A Little Decameron #36” 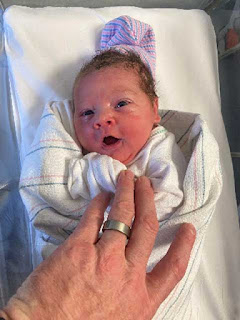 Two serious calls today, one absolutely wonderful: Howard's niece Stephanie had a baby, which she beautifully named Alice Rose (after Howard's grandmother's and mother's name).
The other quite tragic, a dear Washington, D.C. friend is nearing death, after an exceptionally long time of surviving with a number of serious illnesses. Hospice has finally suggested that he be removed from his ventilator for pneumonia (after he strangely did not prove positive for the COVDID-19 virus). Does it truly matter? A dear friend is now dying. I'll soon send out our news about one of our very dearest friends. We all cried together on the telephone this morning.
The other night we received a late-night call and weren't able to get to the telephone fast enough. Neither of the calls were from them, but Howard now keeps the phone under his pillow.

Posted by greenintegerblog at 10:45 AM