Douglas Messerli | How to Explain the Misfortune (on Jean-Jacques Viton)

how to explain the misfortune

This morning I awake to hear the news that French poet Jean-Jacques Viton had died (born in Paris in 1933), dying apparently yesterday, Sunday, March 14th in Marseille.

I did not know Jean-Jacques as well as I knew his wife the poet and fiction writer Liliane Giraudon, but I did attend a reading of his at Beyond Baroque in Venice, California, and afterward we invited Jean-Jacques, Liliane, Rae Armantrout, and her husband Chuck  Korkegian back to our house for dinner. Howard took a long time to prepare the meal, and I recall Rae being anxious for the hour since they were still intending to drive back that night to San Diego. I’ve mentioned this fact elsewhere, but today I truly comprehend her consternation for such a late-night drive. I believe Howard and I would have chosen a hotel in which to spend the night, but Rae and Chuck did have, after all, a young son waiting at home. 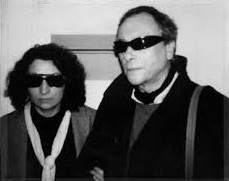 I don’t remember anything else about our conversations, alas. I do recall that Jean-Jacques, probably because of the language differences, was mostly quiet. And Liliane also did not speak English well, as I later realized when I dined with her, Henri Deluy, poet Joseph Guglielmi and others at Deluy’s house in the suburbs of Paris. What might have Howard prepared given that Liliane herself is an excellent cook? Perhaps basil and pasta, which we often served our unexpected guests in those days.

This morning I wrote a poem for Jean-Jacques, using the devices I often use to write through the work of other poets: small accidental choices of word units, association, repetition, and rhyming and punning, obviously in this case, on the English-language translation by Aaron Kunin and Anne Kawala. I also often dive into the original poem as well to re-translate phrases or to apply English rhyming-words to the original French text.

It may be useful to see Viton’s original to see if any remnants of his own poem have made it through the complex associative and linking process.

My poem, dedicated to him, reads as follows:

A consternation explains the misfortune.

Who can move it aside, push space into emptiness

without a little imbroglio? Artificial time

is called a new season, and it reigns here

in this parched land to create the beginning

of what we can only hope might be filled.

At the far end of a soprano’s voice there are

illustrations of what comes next, the imbroglio

in the seraglio’s palace where everything inevitably

must go wrong. A consternation explains

the shadows, the flattened cows against the glass.

A fast bird is on the lam.

I might have kept the row of false fables

to dine upon. I might have drank from the

to all those false friends. It is called a new reason

to tell you why everything came crashing down

into the recesses of the necessary explanation.

In the seraglio the women come and go.

The man outside is waiting for the water

to return to its vases. The castrato sings

in his soprano’s voice, calling out for the consternation

to end.  He pushes aside the emptiness

and enters on the lam into the imbroglio

Falling in the dismay of his embarrassment.

The time has come to admit the season is no longer

real. The palace doors have closed, and the harem

has escaped. The cow’s faces are pasted upon

the surface of the grass. The bird flies quickly

off.  The friends flee, faced with the end of the fable.

Posted by greenintegerblog at 3:33 AM No comments: